In On The Kill Taker by Joe Gross 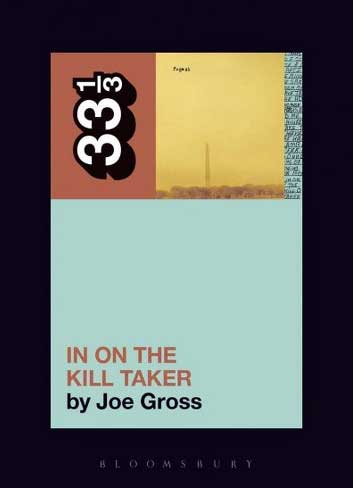 Through the ‘33 and a 1/3’ book series, each dedicated to individual music albums, I’ve enjoyed historical and critical summaries of My Bloody Valentine’s Loveless and David Bowie’s Low, although a comparable backstory to Talking Heads’ Fear of Music would have to be found elsewhere — in that edition, Jonathan Lethem took an analytical approach to the content and themes of that album’s songs rather than telling the story of how the band developed its material, how they recorded it in the studio and how it was received publicly afterwards. Other books in the series take a theoretical approach or showcase fiction written in response to an album. You may or may not want to know which approach is being taken before committing to individual titles.

The 129th book in the series, on Fugazi’s third album In On The Kill Taker, is written by Joe Gross, a seasoned music journalist, and unashamedly an enormous fan of the band, as he declares in the book’s Acknowledgements: “Fugazi is the band I’ve thought about the most, period, full stop. From hearing them at… 14? at a friend’s house in 1988, scarcely a day has gone by in which their music, their ethics, their way of looking at the world has not entered my mind.” The resulting book is an extended piece of music journalism, looking back at Fugazi, the album and the time of its 1993 release. We learn about the formation and development of this post-hardcore band, including earlier formative bands the core members were in.

Gross shares personal responses to Fugazi’s music, and the individual album tracks, conveying his visceral response to the music and the lyrics. This is backed up with interviews conducted with the four band members and others closely involved in their work.

Whilst there are clear and important backstories to the song’s lyrics — some personal, some political — the book addresses the ambiguity of many of them, and the occasional public conjecture or misunderstanding as to what songs were actually about. As filmmaker and band collaborator Jem Cohen says in the book: “ambiguity and poetic elements are integral to this band. Sometimes things were included because there was no exact meaning.”

‘Interlude’ chapters are peppered throughout, providing insights into other contextualising aspects of the album. This includes the story of Fugazi working with producer Steve Albini on a set of demos for the album which were discarded — the band had a positive and reinforcing experience working with Albini, but everyone later realised the demos fell short of their aspirations. The story of the band’s relationship with Jem Cohen, who developed the album’s thoughtful and considered cover design (and later directed the Fugazi film “Instrument”), bolsters the importance of committed and ethical long term relationships to the group. Gross also provides an overview of the mainstream and independent music business at the time of the album’s release, and challenges around the mainstream embrace of punk and grunge.

This is all delivered in a conversational style — although published by Bloomsbury, the writing in places is closer to what you might expect in a fanzine: excited, committed, informed, declarative. Gross’ voice shines through, which feels suitably aligned with the politics and intent of the band.

The book covers Fugazi’s compositional process, with individual chapters dedicated to each album track. The Fugazi Live Series, the online archive of hundreds of Fuzagi concert recordings, as well as a variety of demo recordings (publicly available or not), provides a level of background detail to the development of some songs which may be fascinating to some fans but for me occasionally bordered on being ‘too much information.’ Discussing the song “Rend It”, Gross starts in on a description of one more live outing of the song (and, to him, important step in its development) with, “One more before you throw this book across the room …”

Gross certainly gives a clear sense of the band’s political and ethical commitments to their music, its production and distribution. The book also foregrounds the band’s sense of humour, noting that the earnest nature of their work could easily hide that.

I can’t tell if the book has been closely edited, or edited badly, or (to be supportive) if the editing has been intentionally slapdash to give a fanzine-like quality. Typing errors appear every page or two, and there are some duplications or reiterations of ideas in close proximity in the text — although these didn’t get in the way of my reading or enjoyment of the book.

I sense that fans of the band will take well to Joe Gross’ intention: “[Fugazi] are ill-served by history. If this book has helped correct the record even a little bit, I am happy with it.” I didn’t feel excluded, but this is a writer who clearly loves the band, and wants to convey in a very literal sense how he responds to their music and how the backstory to the band and their work has enriched his enjoyment of their music. Indeed, not knowing much about Fugazi, I found this a very useful primer on the group, and at 160 pages it provides a welcome introduction to the band as well as the Washington DC Punk scene.

Tweet
This entry was posted on 23 May, 2018 in homepage and tagged CJ Mitchell. Bookmark the permalink.