INTERROBANG: a bio of sorts

“The interrobang, /ɪnˈtɛrəbæŋ/, ‽ is a nonstandard punctuation mark used in various written languages and intended to combine the functions of the question mark and the exclamation mark (known in printers’ and programmers’ jargon as the “bang”).

A sentence ending with an interrobang asks a question in an excited manner, expresses excitement or disbelief in the form of a question, or asks a rhetorical question.

Bruce and Hamer both have previous form as awkward troublemakers in the anarcho-pop-cabaret troupe Chumbawamba whilst Griffin was a former enfant terrible in the London louts, Regular Fries. We came together as Interrobang, with a clear vision to create something that is current and relevant; something that speaks to our generation who grew up in the shadow of punk, with hopes and dreams, full of rebellion. What happened to that spark? How do we express our anger now? How relevant are we? How do we make ourselves heard and where do we fit in now?

This isn’t comfortable or retro; we reject wholeheartedly the idea of nostalgia, we refuse to live in the past, there’s no misty-eyed looking back; this is all forward, forward motion.

Lyrically inspired by hitting the age of 50 Interrobang address all those difficult to talk about clichés of the mid life man-crisis and so it’s sometimes slightly shirty, occasionally curmudgeonly, but always, always brutally honest. We are talking about the now; about our hopes, our fears, our dreams and our nightmares.

This baring of souls is played out via their battered and bruised uneasy listening. Guitarist Griffin has developed a style that assaults you and whose sonic complexity can shake you, rattle your aging bones and send you helter-skeltering onto the dancefloor. It’s a frantic, skewed quirky, punchy, staccato pop.

“The novels of Dostoevsky are seething whirlpools, gyrating sandstorms,

waterspouts which hiss and boil and suck us in. They are composed purely and wholly of the stuff of the soul. Against our wills we are drawn in, whirled round, blinded, suffocated, and at the same time filled with a giddy rapture.”

If Interrobang can create this feeling with their music then we are winning: 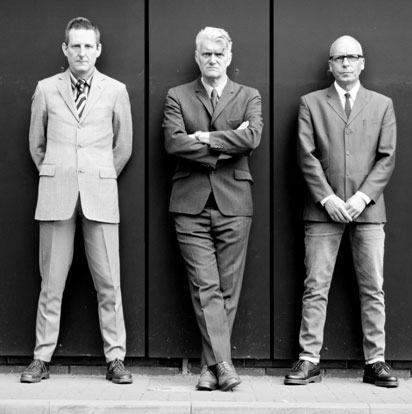 Interrobang‽ play at The Lexington, Islington London on 21st October 2017

with The Cravats and the Astronauts

“Next up are the equally brilliant Interrobang. Maybe it’s the northern accent or the way in which Dunstan Bruce sings but I can’t help but be reminded of The Cribs and Maximo Park when watching the band live and listening to them again after the show. As indie as their singer’s voice may sound the punk influence on the bands instrumental sound is undeniable. Their songs are loud and they make me want to throw my arms in the air and lose all control, it seems they have this effect on the entire audience and the bands high spirits are nearly impossible to ignore. One song is named Billingham and is dedicated to Dunstan’s home town, his and the band’s passion for music and pride in where they’re from makes them likeable and I would not hesitate go and see this band again.”

“Having spent a significant part of my life with a deep affection for Chumbawamba, the prospect of seeing Interrobang (featuring former Chumbas frontman Dunst and drummer Harry) play a support slot to a small crowd at The Cluny actually made me a little anxious. I needn’t have worried. From the moment Dunst strode from the crowd onto the stage declaiming through a megaphone, it was clear that Interrobang are pretty damn special. Guitarist Griff was a marvel – creating loops on the fly to give extra attack to a taut, clear style that’s equal parts Ian Mackaye and Pete Townshend – and with Harry’s economical drums (there’s no bassist), the band sound lean and urgent. Dunst was always a compelling, charismatic frontman and that still holds – there’s a poise and a quiet anger to his vocals and his soi-disant “grumpy curmudgeon in a state of high dudgeon” persona is refreshing and affecting.”

Tweet
This entry was posted on 13 September, 2017 in homepage and tagged INTERROBANG. Bookmark the permalink.