An Animal Rights Article from All-Creatures.org

A nation of zombies feeds on the flesh of dead animals, salutes, pledges allegiance to, and sings the patriotic songs of the Empire which spreads death and destruction worldwide. Few have noticed Bad Karma nibbling away at their sorry asses. Few have noticed the Fall of Empire in progress. Their national borders are prison bars, their economy in shambles, their hopes and dreams gone. When it comes to neighbors, love has been replaced by fear. More firearms than humans populate the land… 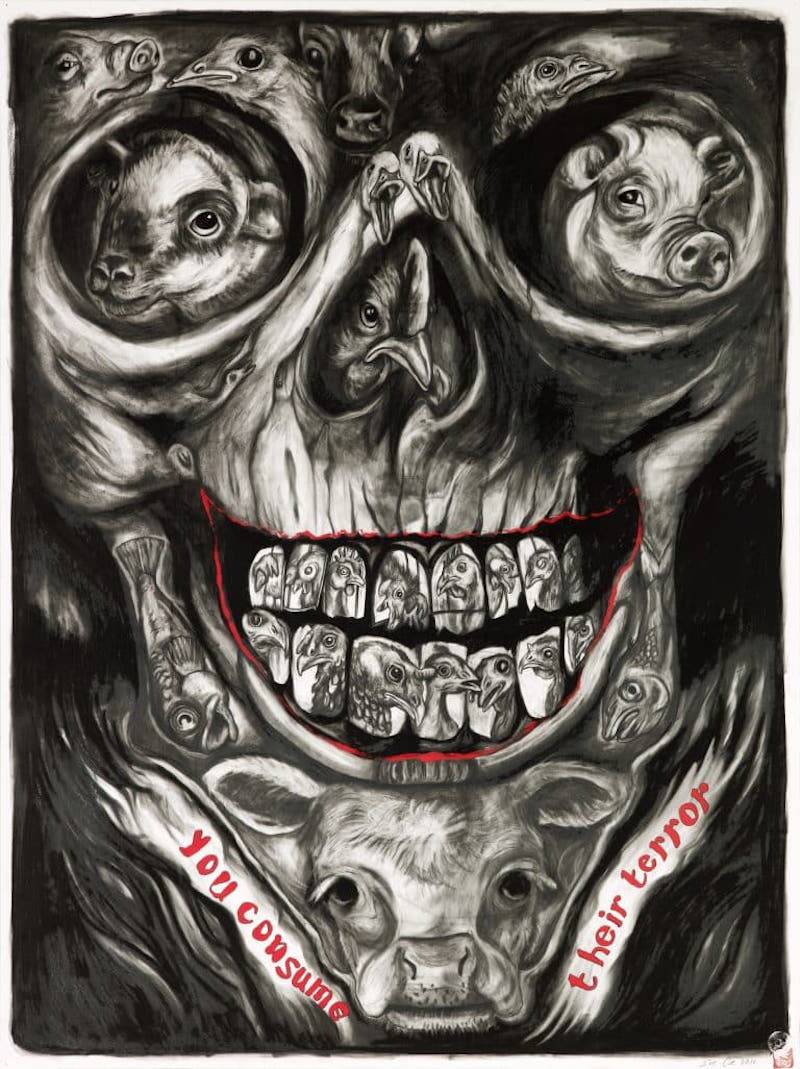 Hindu scriptures teach that anyone who kills or causes harm to other sentient beings is in for a big dose of Bad Karma as a result. The shit can hit the fan in this lifetime or in some future reincarnation, but it will happen. Not that I personally subscribe to Hinduism or any other religion, but I do believe that there’s a large dose of merit in their world view. A lot can be said for lifestyles which involve veganism and peaceful coexistence with our fellow beings. Stray from the path, commit the crime, and you’ll eventually do the time. Like the Hindus, we’ll define “sentient beings” as including (most) humans, all other creatures with eyes and mothers, and most importantly Mother Earth herself; for she’s borne the brunt of harm caused by her thoughtless, careless, greedy human children.

Dead meat is the fuel that powers Empire, and the resulting karmic disaster now bites all its citizens in the ass in oh so many ways. We’ve been told since birth that we need to kill and consume cows, pigs, chickens, turkeys, ducks, sheep, goats, rabbits, and/or squirrels, to maintain a necessary level of protein in our diets. Whack ’em, gut ’em, skin ’em, cook ’em (optional), and eat ’em. We’ve also been instructed to drink the milk meant for calves, in its many forms, and to ingest the embryos of large birds. If you are a believer in the studies and lifework of Dr. Caldwell Esselstyn, or are even mildly observant, you understand that your morbidly obese friends and neighbors (or you) are dying prematurely from meat/dairy/egg-intensive diets, in ever-increasing numbers. Heart/coronary artery disease, cancers, diabetes, dementia, Alzheimer’s, and untold other karmic paybacks are their rewards for either directly killing animals or buying their dead flesh from Safeway’s meat case, and consuming it. If Dr. Esselstyn is correct, by the time the average meat-consuming high school graduate in The U.S.A. accepts his diploma, coronary artery disease is already ravaging his body.

Dead meat is the fuel that powers Empire. War is its business, and fast becoming its only business. Bombs, bullets, missiles, rockets, warships, and warplanes are its preferred delivery methods. Its young people are lured into the bloody, tangled web of death and destruction by slick-huckster, pseudo-patriotic, U.S. Military-glorifying advertising schemes. The lucky do their time, emerging with bodies largely intact, suffering only a lifetime of residual mental anguish and PTSD, souls stolen away, brains scrambled, expressionless, and aimless, demented, self-doubting heroes to the masses who cheerlead Empire’s wars. Warfare for profit drives the stock markets. In my lifetime alone: A few million dead Koreans, a few million dead Vietnamese, Cambodians, Laotians, a few million dead Afghans, Iraqis, Libyans, and Syrians, and the market values of Boeing, Exxon-Mobil, Raytheon, Halliburton, Monsanto, and Northrop Grumman soar. Billionaires, corporate executives, bankers, and politicians rake in the blood money. Combat boots leave their marks upon the faces of dead populations across the globe, as the looming shadow of Bad Karma darkens the land.

Dead meat, the fuel that powers Empire, brings a tear to the eye of Mother Earth. Mega-corporate meat-growing mass-execution operations grow sentient mammals and birds in immobile squalor, pumping them full of antibiotics and growth hormones, raping (force-breeding) them, stealing their progeny and milk, unceremoniously slaughtering them, and feeding them to the masses of sick, mindless, obese humans. Filling the atmosphere with the stench of uncontained defecation and urination, and contributing more greenhouse gas emissions than all other sources combined. Crops feeding death-row, USDA-inspected, four-legged or feathered prisoners consume more water in Empire than all other uses combined, both domestic and agricultural, not to mention the associated, indiscriminate use of toxic soil-killing herbicides and pesticides connected with corporate agriculture.

Dead meat. Populations of third world countries cry out for food and drinking water, but receive bombs instead. Citizens unfortunate enough to live in oil-rich lands yearn for basic needs, but find themselves to be testing grounds for Empire’s newest, state-of-the-art WMD’s. But who needs rice when you can have depleted uranium? Countries ravaged, war’s ultimate goal; death, destruction, chaos. Dead meat litters broken countrysides. Empire’s exceptional citizens stuff their fat faces full of dead meat. They watch in awestruck approval the fireworks of death, in countries they can’t find on a map, on their favorite corporate “news” channels. Meat; it’s what’s for dinner. Meat; it’s what you become if you’re not in sync with Empire’s agenda. Meat; it’s what all sentient beings are, in the eyes of those who push the buttons and pull Empire’s strings. Resources to be harvested. Meat. 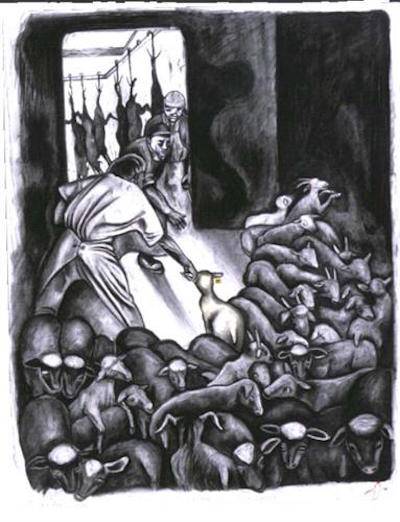 The U.S.A. is now ground zero for karmic disaster. A nation of zombies feeds on the flesh of dead animals, salutes, pledges allegiance to, and sings the patriotic songs of the Empire which spreads death and destruction worldwide. Few have noticed Bad Karma nibbling away at their sorry asses. Few have noticed the Fall of Empire in progress. Their national borders are prison bars, their economy in shambles, their hopes and dreams gone. When it comes to neighbors, love has been replaced by fear. More firearms than humans populate the land. Pawnshops and porn stores offer temporary solace from wretched lives of impending poverty and loveless relationships with despised partners. Self-loathing zombies cover their bodies, head to toe, with senseless colorful graffiti, squalor of the skin, ill-conceived epidermal etchings. Drug and alcohol addiction run rampant. Hungry, homeless, hopeless people beg on every street corner, while others turn a blind eye. The Police State grows like a malignant tumor across the land, but soulless faces buried in miniature electronics fail to pay heed.

It would be easy to end this sordid little piece on a hopeless note, for Empire’s apparent future appears to hold little in the way of hope. If only there was someone who might have a chance of gaining enough power to turn things around, end constant warfare for profit, and bring a degree of sanity to The U.S.A. before Bad Karma brings the wrath of the rest of the world down upon us in a big and final way. Someone who would have the huevos to run for and be elected POTUS, buck the power of The C.I.A., The U.S. Military, the neocon/neolib war consortium, and Wall Street. A John F. Kennedy reincarnate. Maybe a disillusioned combat veteran who’s also a beautiful, well-spoken, and fearless U.S. Congresswoman from Hawaii. Someone who’s travelled to Syria (with Dennis Kucinich), spoken with President Assad, doubts that he was responsible for the sarin gassing of his people, and would be extremely hesitant to EVER AGAIN start another war. How about a lifelong vegetarian Hindu? President Tulsi Gabbard….hmmm. We can only hope and dream. Karmic disaster is imminent as our karmic debt comes due, but there may yet be time to bury Empire and save The U.S.A. Hope springs eternal.

The Greanville Post Senior Contributing Editor, John R. Hall is a street-trained agnotologist with an advanced degree in American Ignorance. Other hats include: photojournalist, novelist, restaurateur, mountaineer, grocer, nurseryman, and janitor. He’s written three novels which have been read by almost nobody: Embracing Darwin, Last Dance in Lubberland, and Atlas fumbled. An untrained writer and college drop-out, he began his short career in journalism writing the ‘Excursion’ column for The Jackson Hole News & Guide. More recently he penned the ‘Left Column’ for The Molokai Island Times; appropriately on the island once known as a leper colony. John currently resides, writes, and protests injustice in the shadow of the Sangre de Cristo Mountains, and walks among the spirits of those who once occupied the 79 Disappeared Pueblos.