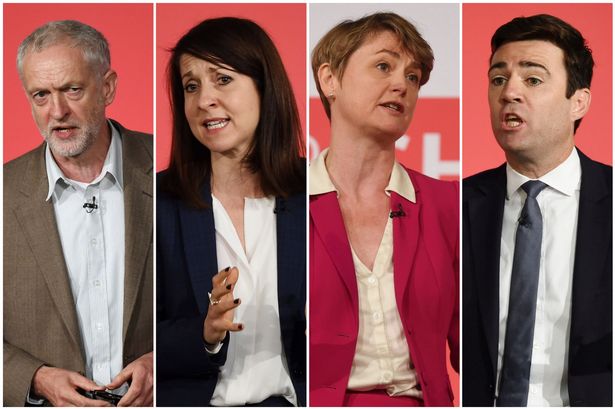 After a hugely disappointing General Election, the Labour leadership contest, an event that is on its way to becoming a post election tradition, is here to shake up the faithful, or shake out the faithless. Leaders are important, they offer a direction, a vision, or if you’re a fan of plastic politics a journey. However the visions of the latest bunch of wannabe leaders fall somewhat short of visionary, here in a nutshell are some of their big ideas with a little background.

Andy Burnham: A bland Liverpudlian uncomfortable with the LGTB scene, who aims to mill along placidly with a few nods to the left before losing the general election. According to the Guardian, his two key pledges are.

•   To break down the barriers between technical and academic education, with fairer funding through a new graduate tax.

Both of which need a lot of explaining before there could be any ostensible benefit to anyone in the world. Or further afield.

Yvette Cooper: Former bright young thing who needs a promotion to support an out of work husband + three children, mums.net approved, aims to mill along placidly in firm centre ground before losing the general election. She has said the closest thing she has to a hobby is being a taxi driver for her children, this is because working mums don’t have time for hobbies.

Liz Kendall: Dr Dre fan, once a talented footballer, will support Conservative policies to make Labour electable but this will not make Labour electable. Higher entertainment value than the aforementioned candidates  but worryingly Blairish, New Labour amalgam of ‘populist’ idiocy. According to the Sun: ‘Labour’s only hope’, or in other words: Labour doesn’t have a hope.

Except that Labour, real Labour, the Labour that scares the tabloids, the Labour the Murdoch press like to call the Lunatic Left, the old Labour, the good Labour, have a candidate. Jeremy Corbyn is frontrunning in the polls on the seductive ticket of purging the party of Tony Campbell Mandelson sick in a bucket sleaze and soundbites, a sizeable chunk that needs amputating. The Corbyn bid has got senior figures worried, people appear to be joining Labour to vote for him. Joining the Labour Party! Ridiculous! The last thing Labour needs is more members…oh wait.

Jeremy Corbyn will be done over by the tabloids. It doesn’t matter. The Tory government are in Murdoch’s pocket, his papers will slander any Labour leader, all we are talking about is the degree of hostility. The tabloids are a battle Labour lost long ago, they should concentrate on winning over serious journalistic enterprises like the International Times.

On a semi serious note, there is a choice here: vote for old fashioned principals and risk losing honourably or vote for more of the same and end up losing anyway. Having a solidly left Labour party would be a great thing, Jeremy Corbyn could offer a gap between Labour and Conservative that hasn’t existed for a long time, with sound socialist opposition to a horribly right wing pro-business anti-welfare brigade. Vote Jeremy! Viva la revolution!