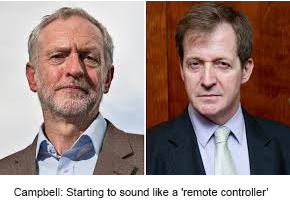 Alastair Campbell, New Labour’s old ideas man who has sexed up more documents than Paul Raymond, barged his way into the Jeremy Corbyn debate last night telling voters in next week’s all-important Labour leadership elections to ‘Pause’ so they can be screened for having undesirably socialist beliefs. Mr Campbell’s comments come after it became obvious to Westminster bigwigs that normal people where actually engaging with left wing politics for the first time in years after hearing the level-headed Corbyn’s policies. Westminster Village insiders are thought to feel threatened by the mild-mannered MP for Islington North fearing that his normal, straight-talking approach could single-handedly undermine the popular misconception that the UK had become an entirely conservative country.

Campbell went on to say, ‘Mr Corbyn’s obviously a communist. Just look at his beard. Stalin and Marx both had beards. And Trotsky. If he got his way he would probably turn the entire country into something resembling Kin Jong-un’s North Korea. Or worse – Diane Abbott’s Hackney. It is best that all UK residents unhappy with the current Tory government, but wishing to see political consistency, keep voting for New Labour and The Third Way.’

When asked to remind all those who are too young to remember what he meant by this ageing slogan he said, “It’s not right wing and it’s definitely not left wing but its something in the middle. A bit like the ‘Standby’ switch on a TV. It’s not quite on and it’s not quite off but could become either at any moment depending on what people wanted. At the simple press of a button. So to speak.’

When Mr Campbell was asked what he thought should happen were Mr Corbyn successfully elected he answered, ‘If, God forbid, this crazed lefty radical gets in then we should simply ‘Rewind’ the voters memories past the point when they had ever heard of him then erase them. The memories that is. Once again always remember: Pause. Standby. Rewind. It’s as easy as P.S.R. As I have chosen to call it.’

After it was put to Mr Campbell that he was starting to sound like a ‘remote controller’ he looked members of the press straight in the eye and emotionlessly replied, ‘And?’

View all posts by Ethan →
This entry was posted on 13 August, 2015 in homepage and tagged current affairs, Ethan Harrison, politics, satire. Bookmark the permalink.