A museum glorifying the macabre crimes of Jack the Ripper has opened at 12 Cable Street in the East End of London – but the premises is supposed to be a Women’s History Museum celebrating the Women’s Suffrage movement. Local residents are extremely upset but Tower Hamlets Council states that it ‘has no control in planning terms of the nature of the museum.’ The opening day was greeted with this protest outside. 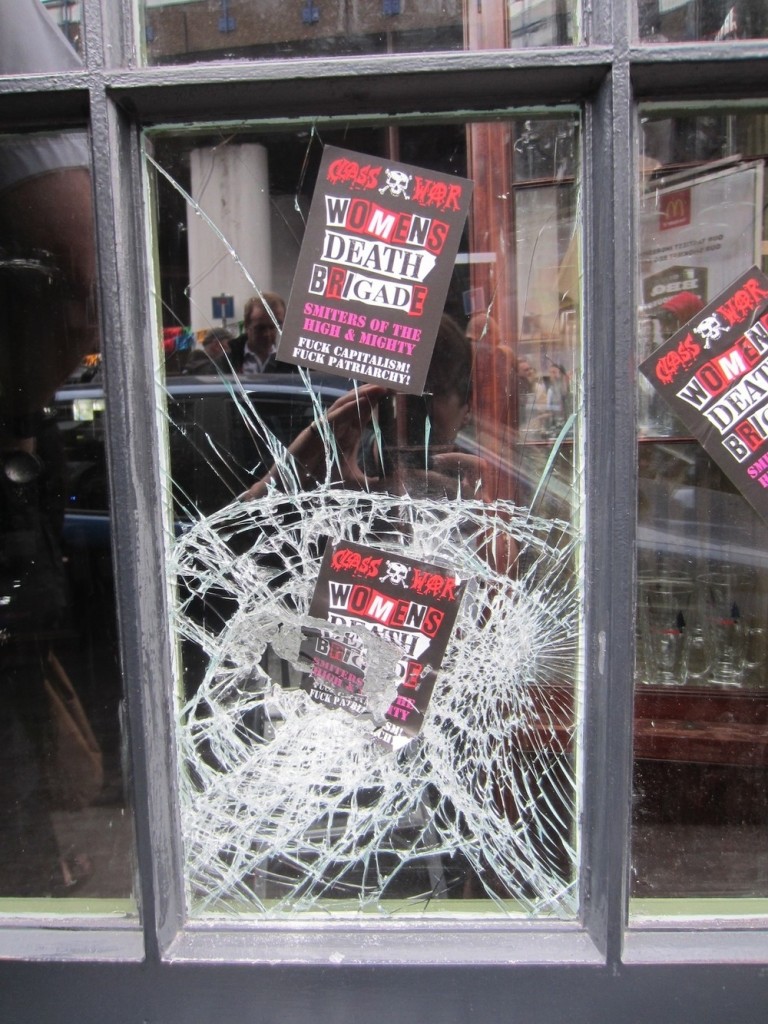 Last week VICE reported that a new museum that promised to celebrate the Suffragete movement and the women of East London had opened – but turned out to be a museum about Jack the Ripper; memorialising the work of a man who is famous for mutilating and murdering women.

This week the understandable outrage has boiled over into public protest. On Tuesday the Greens, Lib Dems, Communist Party and other left-wing groups held a demo outside the proposed museum. On Wednesday night it was the turn of anarchist rabble-rousers Class War and a bunch of their rowdy mates to voice their hostilities.

The site was protected by private security, all ironically wearing stab proof vests. That included this guy – the privatised equivalent of the famous “hipster cop”. 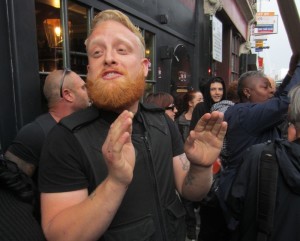 The presence of the bearded man and his colleagues didn’t manage to stop a few rocks being thrown and a window being smashed before one of the hired goons finally remembered the padlock combination to lower the shutters and protect the piles of “Keep Calm. I’m a Ripperologist” T-shirts within. 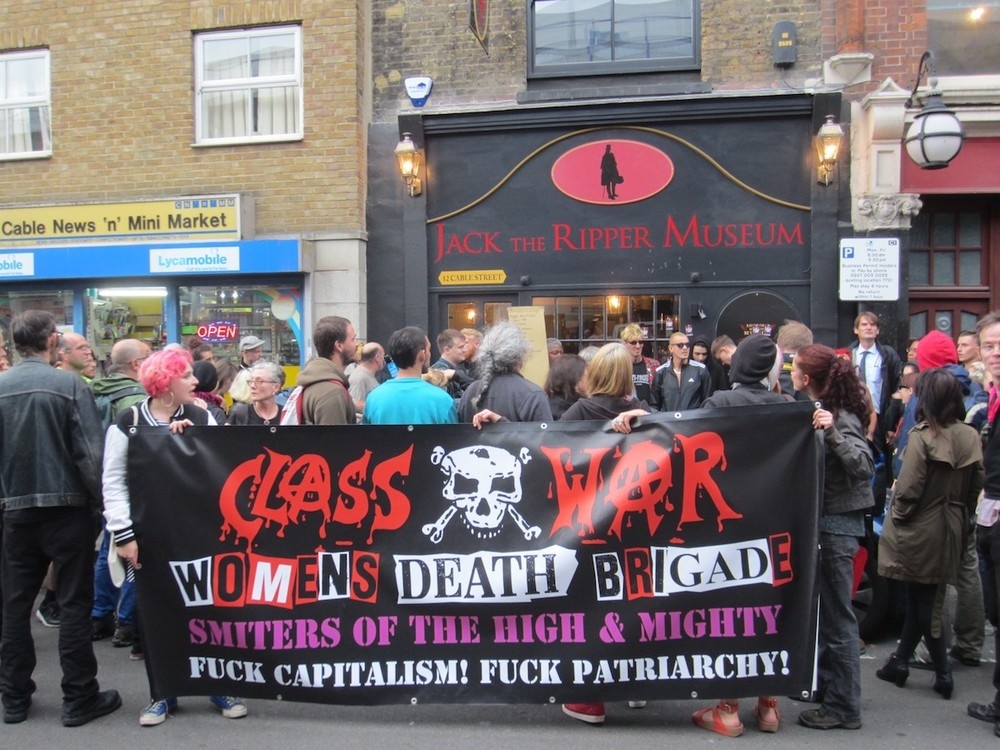 I chatted with a few of the protestors to find out why they were there and why they are determined the museum won’t be allowed to open.

Martin Lux, author of the street-fighting memoir Anti-Fascist and a long-time resident of Cable Street told me,”The East End isn’t just the Kray Twins and Jack The Ripper. It’s the battle of Cable Street, the siege of Sidney Street end countless other examples of working class resistance against the ruling class and their agents.
“If there should be any museum on Cable Street, it should be an anti-fascist museum commemorating the resistance of local people to Mosley’s blackshirts in 1936. The Ripper murders weren’t even associated with this area, they were all in Whitechapel and Spitalfields! Believe me, the campaign against this insult to the memory of East End women is going to be the second Battle of Cable Street and, again – we won’t be letting this pass.”

Tim from Hackney joined in: “The East End has a rich history. What this yuppie prick is serving up now is a cheap, sleazy and fictionalised cash-in. Since the rich, the bankers and the property developers have moved into the East End they’ve done their best to gentrify the present, it seems now they’re not satisfied with that and they’re trying to gentrify the past.” 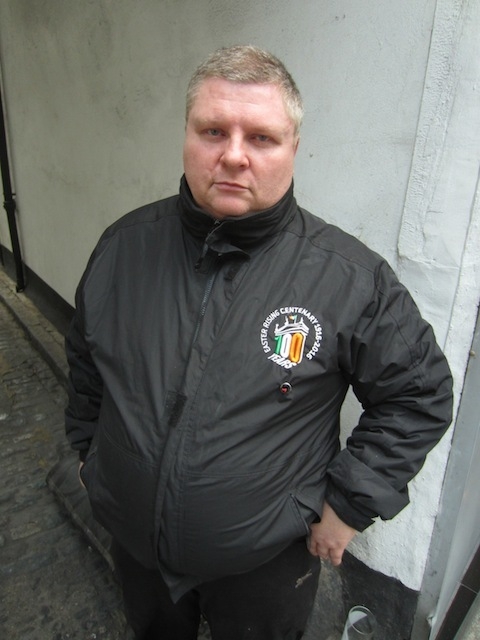 Patrick, a local actor with a role in Dave Courtney’s Full English Breakfast gangster flick under his belt was also pissed off. Almost spitting, he said: “More than the sickening affront to working-class women in the East End, past and present, it’s all just really snidey. Whatever you think of the Ripper tours there are a lot of local working class actors who work on them between jobs and this museum would just take away their bread and butter, as well as mugging off tourists that it’s even in some way authentic. The Ripper never had anything to do with Cable Street. ‘Come and see Jack The Ripper’s living room’ it advertises. No one knows who Jack the Ripper fucking was let alone what his living room looked like.”

.
Overhearing this exchange, a guy called Kevin came up to me and announced he was a former Whitechapel Ripper tour guide, explaining his change in perspective and what had prompted him to attend tonight: “I decided Ripper idolisation simply wasn’t entertainment two years ago after I found out more about the victims and their lives while conducting Ripper tours in Whitechapel. Originally I thought their stories might have been able to enrich my tours but what I grew to realise was that these people, reduced and objectified to being simply ‘Ripper victims’ were real people with real stories other than just being butchered by some misogynistic creep. Needless to say when I introduced this dimension to my tours people weren’t interested and just wanted the prurient guts and gore angle.” 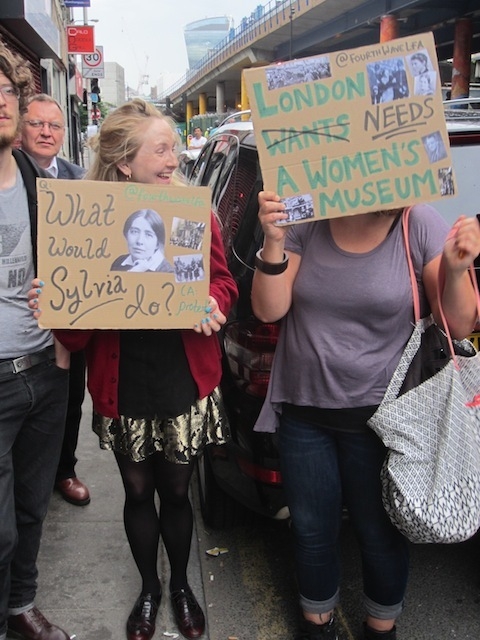 Katie, another local brandishing a placard reading “What would Sylvia do?” – referring to Sylvia Pankhurst, the communist, anti-fascist and campaigner for women’s suffrage – was incandescent. “Out of all the history of courageous women in East London, it’s disgusting they have chosen to glorify women as victims, and in particular victims of sexual violence at a time when unconvicted incidents of rape are at a high,” she said. 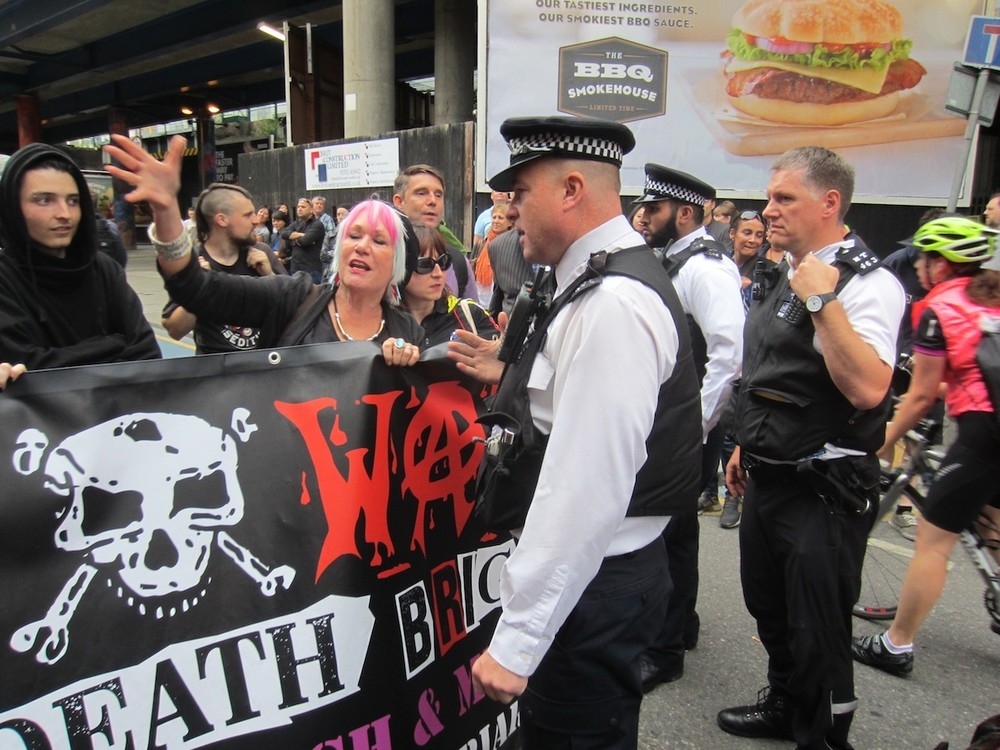 Jane remonstrates with a cop

Jane took a breather from brandishing the Class War Women’s Death Brigade banner and haranguing the cops, security guards and anyone else deserving of a spleen-venting to add, “This is the beginning of the end for this temple to misogyny. Women are fucking angry about this and they aren’t going to tolerate bullshit like this any more.”

The museum’s owner, Mark Palmer-Edgecumbe, insists that he’s an advocate of women’s rights, and that the museum will be educational, rather than a “gorefest”. Unfortunately for him, nobody at the protest seemed to be buying that.

Later, nursing a pint in the pub, veteran anarchist and Class War founder, Ian Bone was in reflective mood: “Tonight was a missed opportunity. We could have taken the place over, squatted it and turn it into the museum celebrating the history of the East End’s women it was originally supposed to be. But don’t think this will be the end of it.”

So we can all look forward to scenes of confused tourists turning up to a Jack the Ripper Museum that should have been about the struggle for Suffrage, only to find demonstrations against it outside. At least that way they’ll see an authentic example of the power angry protest, which was supposed to be the plan in the first place.