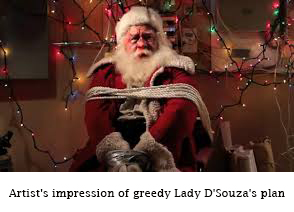 After being accused of blatantly stealing money from the tax-paying public to pay for a series of ridiculous indulgences; including leaving chauffeur driven limousines waiting outside the opera, Lady D’Souza has admitted her part in a bizarre plan to kidnap Santa. Sources close to the greedy peer have revealed that she had built a trap in her fireplace lined with mince pies and brandy in which to ensnare the ageing  yuletide idol as he performed his rounds on Christmas Eve. Baroness D’Souza is reported to have told a neighbour that after this she was going to force him to live in a cupboard under her stairs and would only be let out to clean her enormous house and that she had already bought him a blower to remove the leaves from her driveway.

When it was pointed out to her that she would be, in effect, stealing Christmas itself from billions of children and their families around the world at this special time of year that was, at its very heart, still a time of giving and charity she stared blanked-faced at reporters and said, “But I’m an aristocrat. I don’t understand what you mean.”

After she was reminded over and over again that, along with kidnapping Santa, her embezzlement from the British public by means of her disgraceful gluttony and selfish expenses claims, was morally decrepit she once again looked blank-faced and said, “But I’m an aristocrat. I have utterly no comprehension of what you mean.”

At last a seasoned state official accomplished in the art of public relations was found to answer these important charges on behalf of the deranged peer and stated, “I’m sorry but she is an aristocrat and has no idea what you mean. Merry Christmas and good day.”

Speaking from his busy factory at the North Pole Santa was upbeat upon hearing the news, “Pricking knobs! They’re all as bad as each other; Lords, Ladies, Baronesses, Dukes, Kings, Queens, artiso-bloody-crats. Aristo-Twats more like. Ho ho. Never mind, I’ll still deliver their presents. And y’know why? Because I’m working class and a promise is a bloody promise. Though that greedy tart can pick hers up from her sodding garden. I’d rather put my dick in a box of spiders than go down her chimney. Boom Boom! Remember folks they can steal everything you’ve got; money, houses, power, gold; ho, ho worthless junk but they can’t steal your sense of humour. I’ll share a secret with you that’s what they all ask for when they write to me. But they can sod off and have ferrero rocher and Transformers instead. Because the gift of humour I save for You: The man in the street. You know why? Because you’ve bloody earned it. Anyway, you need it to rip the piss out of those pillocks who wrongly believe they’re in charge. Pricks! Merry Christmas to you all and remember; keep ripping the piss! Merry Christmas! Merry Christmas to you all!”

View all posts by Ethan →
This entry was posted on 24 December, 2015 in homepage and tagged current affairs, Ethan Harrison, politics, satire, Social commentary. Bookmark the permalink.