Madness in the Streets 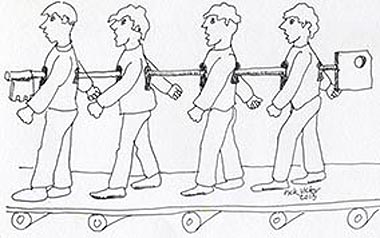 Madness in the streets

He focuses in on this curious anomaly whilst analysing the issue carefully. He becomes aware first, that they are swinging their arms in a purposeful way as if on parade.
‘All they need is a brass-band,’ he thinks.
‘They can’t all be going somewhere,’ he surmises, ‘maybe they’re only pretending. But why on earth would they do that?’

He watches his fellow walkers more closely and fails to see the faintest sign of a bolshie quirk; nor even an eccentric flick of a little finger as far as his eye can see. But they do, he has to admit, all look as if they’re trying as hard as they can to conform to this peculiar pattern.

‘Maybe I should hop and skip and thus break the pattern,’ he thinks.
He is about to put the idea into practice and has just given a preliminary hop, when he discovers precisely why this is not a good idea, and is given a clue to the behaviour of the other pedestrians.
‘They’ll all think I’m mad,’ he concludes. And now he knows for sure why they are all walking in the same way.
‘They’re all stark staring mad,’ he realises, ‘and desperately trying to look normal. Now, if I were similarly afflicted; what would I do to disguise it?’

He ponders a while, and then… ‘I would do everything exactly the way everybody else does.’
Now he has his explanation for the arm swinging.
‘They’re all copying each other.’ He concludes. ‘Terrified that others will see their madness.

Unfortunately, the satisfaction arising from this revelation is sadly short-lived, for now he encounters a deeper issue: Why have they settled on the two arm version? For instance, two arms give rise to four options.
(1) Left arm only swinging.

Somewhere, he speculates, perhaps long, long ago in the distant past, these other alternatives had been abandoned, and the whole population had settled on the number three option.
‘They must all be stark, staring mad,’ he thinks again.

But then… He cannot remember anyone ever mentioning this issue to him. ‘Am I the only one to notice it?’ He asks himself. ‘Because if so then maybe it’s me that’s mad.’ He considers this possibility for a brief moment before dismissing the idea as totally preposterous. However, he notices that those around him seem to have come to the same conclusion with, in their case, a higher degree of conviction than he is able to maintain.

Tweet
This entry was posted on 24 October, 2013 in homepage and tagged conformity, dave tomlin, Madness in the streets, nick victor, satire, Social commentary. Bookmark the permalink.