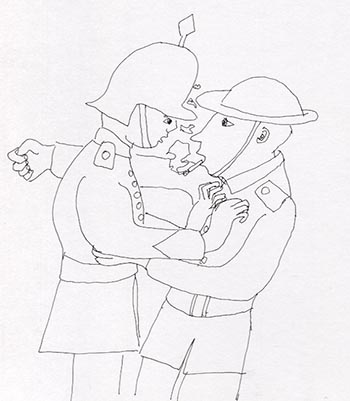 Christmas Eve and darkness falls as a healing balm on the Flanders battlefield; an occasional starshell rises into the night illuminating the corpse strewn mud. The Tommies sip on mugs of tea and puff on  Woodbines but Christmas eve or not, keep their heads down and an eye out for the Boch who are tricky customers and liable to make a sneak attack, taking advantage of this special and Holy night.
But far from it, for a lone German voice floats across the holocaustic mud and the voice is singing:

The Tommies are cheered by this and one or two along the trench join in and soon English and German is intermingling in this song of peace.

Now a sentry points: ‘Look,’ he says, and Lo, there twinkling along the German lines are small Christmas trees which move and begin to venture out into no man’s land.
They’re coming out,’ the sentry shouts again, but too late, since now the Tommies too are leaving their trenches in droves.

The two armies, weaponless, slowly move towards each other still singing and there meet and mingle, clapping each other on the back with many gestures of fellow-feeling; cannon-fodder from both sides recognising their common humanity, and tears are apparent on many German and English cheeks as the hated enemy are seen to be decent fellows just like themselves, while overall falls the kind of genuine peace that politicians can only dream of.

All along the line these transactions are taking place – tins of bully beef and biscuits exchanged for bottles of schnapps;  pots of home-made jam from Blighty for sausages from Frankfurt.

But now the first Tommy is running into trouble: he wants 10 cigars for one packet of gaspers but the Grenadier will give no more than five.
‘Come on,’ says the Tommy, ‘Your cigars are not really much of a smoke.
‘Cigars Gut, says the Grenadier firmly, and will not budge over the issue.
The Tommy concedes the point. ‘OK then,’ he says. Give me 8.
‘Nein, nein,’ protests the Grenadier angrily. ‘Funf – FUNF!’
The Tommy is getting irritated by this Teutonic intransigence and loses his temper.

‘You bloody stingy German bastard,’ he shouts which the Grenadier takes badly.
‘Filthy pig-dog Englander,’ he roars, which is too much for the Tommy who now takes a swing at him. However, the Grenadier is light on his feet and steps adroitly to one side before landing his mighty fist on the Englishman’s jaw and down he goes.

His English mates, seeing this come to his aid and several swarm over the Grenadier bringing him down too, where he begins receiving sundry kicks and punches as he lays in the mud. But they also come under attack as a larger contingent of Germans overwhelm the Tommies.

Now the whole mass are throwing punches and kicks as they struggle together in the mud and darkness. Bellows of anger and rage fill the night air and Christmas trees are trampled underfoot, while many a Hun is felled by a well-aimed tin of bully beef. Some run back to their trenches to fetch their rifles and the scene rapidly deteriorates into something one might witness any night anywhere after the pubs close.

Christmas morning dawns on this day of rest, but Tommies spend the whole of it lining the fire-step of their trenches, while diligently sniping away at anything that moves in the German lines.

Now they really have something to fight about.

View all posts by David →
This entry was posted on 10 July, 2014 in homepage and tagged dave tomlin, nick victor, politics, WAR, World War 2. Bookmark the permalink.