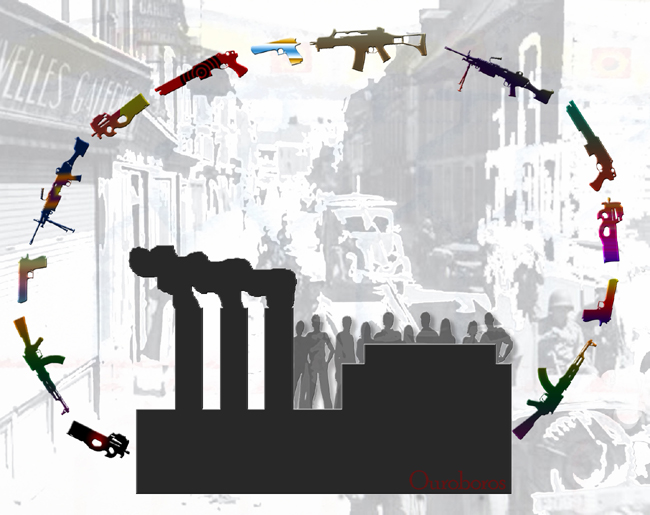 The Masters of War

Some problems are circular in nature and although logic can identify each part it cannot break the chain of causation.

In our times a major war without modern weapons would be impossible.

An accusing finger points to those responsible for weapons of war, although in the present case the target can be somewhat inaccurate. For instance who exactly are ‘The Masters of War’ as Bob Dylan sang: ‘You that make the big guns’?

To begin at the very beginning.

A simplistic question: What are guns for?

Answer: guns are for killing.

The major use and intent of these weapons is to allow human beings to explode metallic projectiles into the bodies of other humans with intent to maim or kill.

Darwin is generally considered to have given birth to the concept of evolution.

However, the manufacture of devices specifically designed to murder members of its own species can hardly be regarded as evolved.

Unless the direction of that evolution is regarded as irrelevant.

Does the manufacturer of these weapons become then the legitimate target of this accusing finger?

Unfortunately, owing to a great degree of confusion over this point the finger has been somewhat misguided and pointed at the wrong target, allowing the real perpetrators to go blithely about their business unidentified.

So who is it precisely that makes these weapons?

No, governments are composed of politicians whose only function is to talk.

Then who is it?

The common answer might be given as: the armament manufacturers.

And who exactly are these?

Is it the directors of the companies?

Well, no. What a director (of any company) mostly does is make the odd phone call; dictate a letter to his secretary or send an email and then go to lunch. He never actually touches a weapon and it is doubtful if he could even get it together to make a half-decent bow and arrow.

Is it the shareholders of the company?

No all they do is receive and spend their dividends; they do not even touch these weapons.

Who then is it?

For the most part it is the working class toilers who kiss their wives each morning and leave for a day’s work at the weapons factory. There they set up their lathes, calibrate the machines and press the buttons that turn out the rifles, machine-guns, cannon, grenades and big guns and countless bullets bayonets and bombs etc.

And these are the very class of people, for the most part, that these weapons are made to kill.

Even so it is sadly doubtful if any amongst them would join an anti-war protest.

View all posts by David →
This entry was posted on 1 May, 2013 in homepage and tagged anti-war protest, dave tomlin, guns, Masters of War, responsibility, Roger Wright, warfare, weapons manufacturers. Bookmark the permalink.

6 Responses to Masters of War