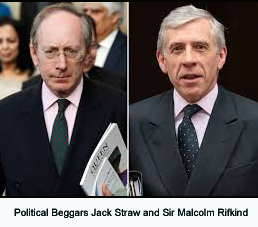 Penniless ex -Home Secretaries Jack Straw and Sir Malcolm Rifkind have highlighted the plight of poorly paid Westminster staff after admitting to being forced to moonlight for extra cash. Unable to scrape by on the measly £67 000 the tightfisted tax payer is prepared to cough up for their services, which as Malcolm Rifkind described include going for a walk and doing a lot of reading, many of them are finding themselves having to offer their services like common prostitutes on the street and from their political boudoirs in the Houses of Commons.In a recent job interview for a Chinese firm, secretly filmed by Channel 4 and the Daily Telegraph, an impoverished Jack Straw was seen having to beg for £5000 per day to go through the harrowing task of speaking in public about his ‘under the radar’ capabilities getting his political friends to change EU rulings for the other companies for whom he was also being forced to work. Sir Malcolm Rifkind, who was also filmed in the revealing documentary, appeared to be so embarrassed about his pathetic job chairing Parliament’s security and intelligence committee that he claimed he was unemployed and did not have a job at all.Socialist overload Ed Miliband demanded banning Westminster staff moonlighting altogether not even letting them have a paper round. The heartless communist ringleader roared from Labour’s headquarters, ‘Once MP’s get a taste for money they will always want more. Like decadent capitalist pigs!’ PM Cameron said he was not in favour of the shadow leader’s proposals claiming, ‘MP’s should be able to run a little corner shop or at least be a drug dealer to boost their meager wages.’Though most MP’s already work in banking, investment, PR, arms dealing, defense, security and various consultancy roles claiming £4.4 million last year in second job income it is thought that this will not even be enough to keep the desperate political beggars in brandy, caviar, prostitutes, chauffeurs second, third and fourth homes, quails eggs, veal, servants, ivory back scratchers, speeding tickets, golden pianos, bribes, holidays and lawyers.
——————————–
.
Ethan Harrison is the republisher of http://illuminatihunter.com/ and has his own blog The Stuffing-it-to-’em Post@Blogspot.com
Tweet

View all posts by Ethan →
This entry was posted on 26 February, 2015 in homepage and tagged Ethan Harrison, political humour, spoof news. Bookmark the permalink.