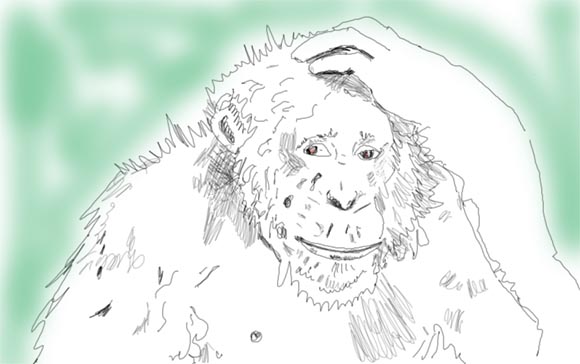 She was expecting to receive a copy of her new book
about affection and relationships, but instead was sent
another from her publisher – Primates Communicate –
so she assumed someone was monkeying around or
aping a sociobiological extrapolation on the behaviour
she had tried to unravel in her tome: how as humans we
fall and stay together tumbling, striving to survive as
paramours in the jungle we call Romantic Love. But
would anyone be so mischievous, shove the red
nucleus in her face like this when all she ever wanted
was her language and ideas bound together for the touch
and understanding of human hands? Answering that is

missing the link between those who joke and those who hunt,
like not seeing the difference in words and a copulatory grunt.

Tweet
This entry was posted on 9 July, 2015 in homepage and tagged Mike Ferguson, nick victor. Bookmark the permalink.