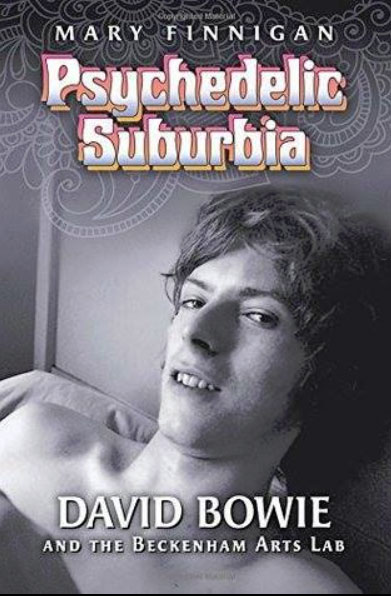 I’m not sure what I was expecting with Mary Finnigan’s book ‘Psychedelic Suburbia.’ I knew it was a pretty slim volume, which it has to be said can spell ‘rushed cash-in.’ But actually it felt like the exact length it should be to tell her story succinctly and touchingly, particularly in its epilogue. What’s so good about ‘Psychedelic Suburbia’ is how honest Mary is about DB without it ever feeling like a hatchet job.

So we get the guy who never did the washing up unless it was the overture to a seduction. The guy who only cooked fry ups, unless it was the overture to a seduction when it was more exotic fare. The guy who could be a coward when it came to facing the consequences of his myriad infidelities. Mary tackles this side of thing with great restraint and wit. After all, this no Confessions of a Groupie. When she met DB she was eight years older than him and didn’t know him from Adam. When they eventually parted company, due largely to the fact that Ziggy had possessed David’s very soul and made him a distant, aloof presence, she is philosophical in her disappointment, commenting just as fully on her uneasiness at Angie’s sudden haughtiness towards her.

The Messiah’s parting words to Mary, at the peak of Ziggy mania, were: “Goodbye Mary. You are a wonderful woman and I will never forget you.” And so it was. She never saw him or spoke to him again. Uncanny, really, that he had such a sure sense of the course his own life would take and all that he would need to leave behind to make that happen: you need to will it, to become it.

There is no self-pity in this memoir, just a sense of one woman’s ongoing need to assimilate the experience of having been there to witness a rock star’s birth and not be lessened or swamped by it. Mary’s parting words to the reader on the news of Bowie’s death are: ‘I felt more like I had lost a child, a precocious child who had bought light in my life for a while and then swung off into the stratosphere.’ A telling summation, I think.

‘Psychedelic Suburbia’ can be effortlessly absorbed in a couple of days yet, oddly, you may well find out more about the real David Bowie (whatever that might mean) than you would from some of the many brick-sized tomes on the man. But just as interestingly, this is a book about a woman coming to terms with the impact the man had on her life in the aftermath of his exit. She mainly seems grateful to him for introducing her to Tibetan Buddhism.

So, no, this memoir isn’t as slight as it might appear. It’s just written in precise, economic prose that says all that needs to be said and no more. It’s also essential reading to anyone interested in the self-making of a star and a particular cultural period in the late 1960s when a small group of idealistic artists and musicians made an heroic effort to turn Beckenham into Haight-Ashbury.