It is a rare thing when a book comes along that looks as magnificent as Flesh Film and reads like an hallucination. To be clear,  Jürgen Ploog is an author who does not write for everyone. The “story” he tells in Flesh Film has the pulpy tone of science fiction, a narrator who sounds like a globe-trotting private eye down on his luck, and a title that signals the author’s take on reality as a metaphysical construct.

The story is in fact nothing more — or less — than a collage of words written in Ploog’s customary cut-prose style, derived from the Burroughs-Gysin cut-up technique. And although the tale has the coloration of a Burroughsian world, its atmosphere is unique to Ploog’s experience as a former Lufthansa space jockey. He used to pilot 747s across the world — it did something strange to his sensibility besides giving him a bird’s eye view.

As designed by Robert Schalinski for the German publisher Moloko Print, the text of Flesh Film looks like a manuscript duplicated on an old copying machine. Meanwhile, the visual collages (also “written” by Ploog as a series of hieroglyphic fantasies) lend a splendid sort of punctuation to this fever dream. Something else worth noting: Although Ploog’s native language is German, Flesh Film was written directly in English. When it comes to cut-prose, he says, “it’s easier that way.”

Here are some excerpts for your viewing and reading pleasure. 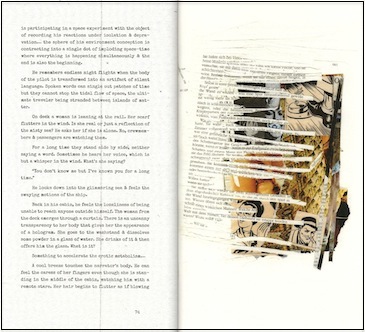 He remembers endless night flights when the body of a pilot is transformed into an artifact of silent language. Spoken words can single out patches of time but they cannot stop the tidal flow of space, the ultimate traveler being stranded between islands of matter. On deck a woman is leaning at the rail. Her scarf flutters in the wind. Is she real or just a reflection of the misty sea? He asks her if she is alone. No, crewmembers are watching them. For a long time they stand side by side, neither saying a word. Sometimes he hears her voice, which is but a whisper in the wind. What’s she saying? 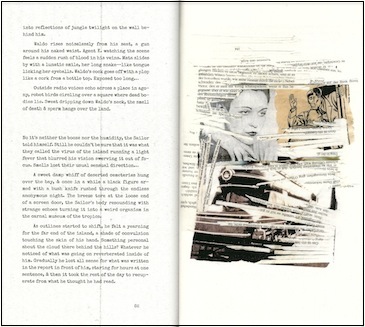 Waldo rises noiselessly from his seat, a gun around his naked waist. Agent K. watching the scene feels a sudden rush of blood in his veins. Mata slides by with a lunatic smile, her long snake-like tongue licking her eyeballs. Waldo’s cock goes off with a plop like a cork from a bottle top.

Exposed too long. Outside radio voices echo across a place in agony, robot birds circling over a square where dead bodies lie. Sweat dripping down Waldo’s neck, the smell of death & sperm hangs over the land. … 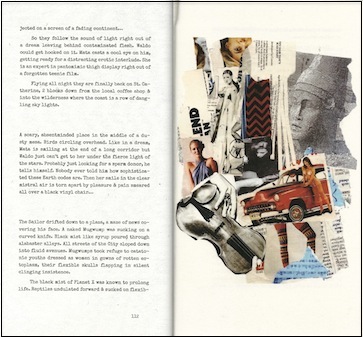 Tired & freaked out, the Countess retreats to a small motel room stashing the phone under a pile of pillows.

A scary, absent-minded place in the middle of dusty mesa. Birds circling overhead. Like in a dream, Mata is smiling at the end of a long corridor but Waldo just can’t get to her under the fierce light of the stars. Probably just looking for a sperm donor, he tells himself. Nobody ever told him how sophisticated these Earth codes are. Then her smile in the clear mistral air is torn apart by pleasure & pain smeared all over  a black vinyl chair …

View all posts by Jan →
This entry was posted on 22 December, 2018 in homepage. Bookmark the permalink.