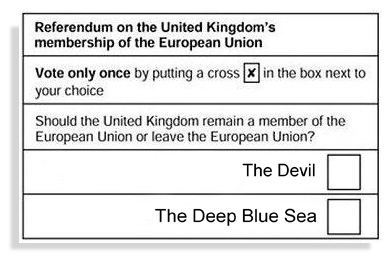 Still trying to puzzle the referendum out. I hate the people who have been chosen to lead the Leave campaign as much as anyone. The debate so far has seriously sold the British public short, with lies and disinformation on both sides, and the main arguments focusing on people’s darkest and most negative emotions: anger, suspicion, hatred and fear.

All rational debate has gone out of the window. All we are seem to hear are the shrill pronouncements of prejudice and fear and meanwhile we’ve been seriously divided as a nation, with many working class people, worried about the effects of immigration on our way of life and our public services, being drawn into the Ukip orbit, while self-righteous leftists stand on the sidelines accusing them of xenophobia.

Doesn’t that worry you? It worries me.

If I were a conspiracy theorist I might think that this has all been planned in secret meetings between the Bilderberg Group and the Bavarian Illuminati during devil-worshiping rituals in Bohemian Grove, but I don’t think even they could have come up with a scenario quite as wildly unpredictable and divisive as this campaign has turned out to be. And as if to confirm this Lord Rothschild is for Remain, and, as everyone knows, he’s the leader of the Lizard People.

It’s even happening inside my own skull. One half of me is with my left-leaning friends on the Remain side: with Jeremy Corbyn, the Greens, Yanis Varoufakis and the hope that we can change the EU from within. The other half says no, the EU can’t be reformed, but a Leave vote will certainly wreak interesting chaos. So I’m torn between my reason and my passion here, between my conservative good sense and my instinct for revolutionary mayhem, for casting the dice and seeing where it rolls.

The result will be entirely unpredictable. The people of Europe, many of them also profoundly disillusioned with the European project, are watching this debate with keen interest. A Leave vote would certainly encourage Eurosceptics, both on the left and the right, to start agitating for their own referendums.

Meanwhile, here in the UK, the results are equally in the balance. How long will a Boris-lead Tory Party survive do you think, terminally split as it is and with a wafer-thin majority? Would there be a General Election? And what would happen to Ukip once its raison-d’etre has been removed? It would certainly gain a short-term advantage, which would damage both Labour and the Conservatives, but in the long-term, I imagine, it would be reabsorbed back into the right-wing of the Tory Party where it belongs, where it will be condemned to sing Rule Britannia in an echo chamber forever more.

Meanwhile Corbyn seems oddly sanguine about the whole thing. It’s a win-win situation for him. He’s arguing for Remain in order to stop the Blairites attacking him from the rear but his instincts have always been for Leave, and he can work with either result. That’s my guess anyway.

As for me, I probably won’t make up my mind until I walk into the poll booth tomorrow.

And then regret it as soon as I walk out again.