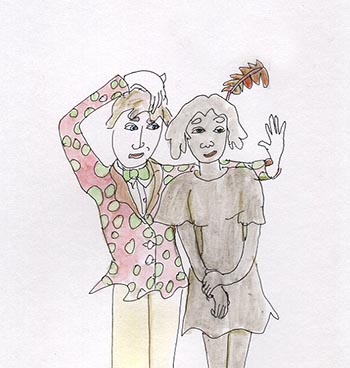 ‘The bargepole was an extremely long device used in the days of canals when the bargee encountered obstacles and tight bends which might otherwise snag their narrow-boats. Also applied to ward off other barges which might venture too closely.

The bargepole may also be useful when, failing all else, (Marriage counselling, relationship therapy etc.) the instrument comes for obvious reasons into its own.’

Smith, a man of dubious qualities, has acquired a new girl-friend. He is much enamoured of her but already has doubts about the relationship as at times he finds her somewhat difficult.

The scene is the foyer of a large hotel, a scattering of people occupies a row of comfortable chairs against a far wall amongst which sits an attractive young woman. Suddenly the door to the street opens and Smith enters, his overcoat is unbuttoned and he looks a little dishevelled. Casting his eye around the room it falls upon the young woman and he walks over and stands in front of her.

‘Christine,’ he says.
The woman looks blankly up at him and then quickly away.
‘Christine,’ says Smith again, but the girl looks a little upset. ‘I don’t know you,’ she says. ‘Leave me alone.’
She shifts uncomfortably in her seat and people sitting around her give the young man hostile looks.
‘Look Christine,’ says Smith. ‘We arranged to meet here.’

‘What?’ The girl is now getting really upset. ‘Go away,’ she says angrily. ‘I don’t know you and if you don’t leave me alone I will call the management.
Smith is getting frustrated.
‘It was only yesterday,’ he says, trying to be reasonable. ‘We were on a bus and we arranged to meet — here.’
‘I never go on buses,’ says the girl. ‘Please leave me alone.’
‘It was the number 31,’ says Smith. ‘Yesterday.’
‘I told you, I never go on buses,’ says the girl, she looks doubtful for a moment and then… ‘Well… maybe I was on a bus yesterday.’
Yes,’ says Smith excitedly. ‘It was the 31.’

She looks at him with a puzzled frown. ‘Smith?… Smith?…’ And then her face lighting up: ‘SMITH!’
‘Yes, yes,’ says Smith rubbing his hands together with delight.

‘Now, what film are we going to see?’

Tweet
This entry was posted on 24 July, 2014 in homepage. Bookmark the permalink.