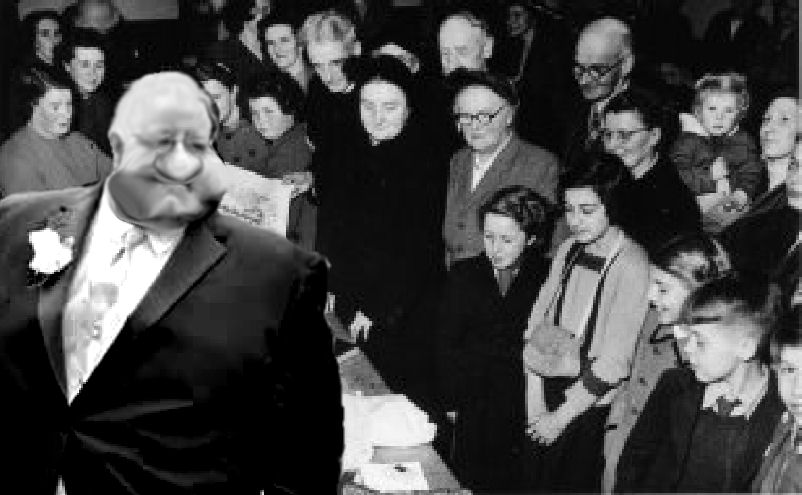 It has been said that in order to restrict someone’s freedom guards must be posted, and further; that such a guard must maintain a constant vigil, making him to all intents and purposes, a prisoner too.

Similarly, those who hold power must be ever on their guard lest someone scratch themselves without asking permission.

However it is some compensation to clap them in irons for their cheek.

The village hall is strung with coloured bunting and the ladies bustle around making sure all is ready for the afternoon’s jumble sale and exhibition of local arts and crafts. They are very excited for today the leader of the Council, Sir Peter Buller has agreed to visit and grace the occasion with his presence.

A great many of the local inhabitants and even quite a number from the outlying districts have turned up on the look-out for the odd bargain and to partake of tea and home-made cakes, and already the tea-stall, presided over by the Vicar, is doing a thriving trade. Among this gathering is eight year old Jimmy, who is here with his dad.

‘I want a jam tart, Dad,’ he says, pulling at his father’s jacket. But the stall, as yet, is too crowded to get near enough and they wait on the fringes for an opportunity to occur.

Suddenly the swing door opens to admit the ticket lady. She waves her arms around for silence and people begin shushing each other.

‘He’s coming,’ says the ticket lady excitedly. ‘Be quiet, Sir Peter is outside.’

All talking ceases and everyone waits in the tense silence. Now enters a town-hall minion who holds open the door for the entrance of Sir Peter Buller himself.

He is not a tall man and considerably overweight, but he compensates for this handicap by way of his aristocratic nose, of which he is immensely proud, and he holds it high as he makes his pompous way into the hall. He struts a little with self-importance and casts his eye around in a regal and conceited manner. The silence is profound; broken only by the high piping voice of little Jimmy.

‘Who’s the funny man with the big nose, Dad?’ he asks. His Dad doesn’t answer, for Jimmy’s voice has rung through the silence for all to hear.

Sir Buller’s face is a study in anger, embarrassment and humiliation. However he is saved from this painful ignominy by the Lady Mayor, who hurries forward and linking her arm with his invites him to come and inspect the arts-and-crafts stall. At this the chatter once more starts up and the situation on the surface seems saved. Beneath the surface however, Sir Peter wants retribution for his humiliation.

‘Find out the name of that boy’s father,’ he instructs into the minion’s ear. ‘I want the address too.’

The man hurries off and makes some discreet inquiries, and it is not long before he returns with the required information. Sir Peter notes it down and the rest of the day passes without a hitch; while the ladies, apart from a little tut-tutting regarding the unruly boy, are happy.

A few days later however, Jimmy’s Dad receives an official notice from the Town Hall.

“It has come to the Council’s notice,” it says, “That you have, entirely contrary to planning laws, built an illegal and unlicensed structure in your back-garden, for which you did not apply to the Council for the required permission.

You will dismantle this structure within seven days from the date of this letter. Failure to do so will have serious consequences and result in certain prosecution.”

‘Oh, Dad, why?’ sobs Jimmy, as his Dad begins breaking up the little wooden play-house that he had only last week built for Jimmy and his friends.

‘I told you before to stop making comments about people in public,’ says his Dad crossly. ‘That’s how you upset them.’

‘The funny man with the big nose,’ says his Dad.

View all posts by David →
This entry was posted on 18 December, 2012 in homepage and tagged dave tomlin, Mayor, Mike Lesser. Bookmark the permalink.