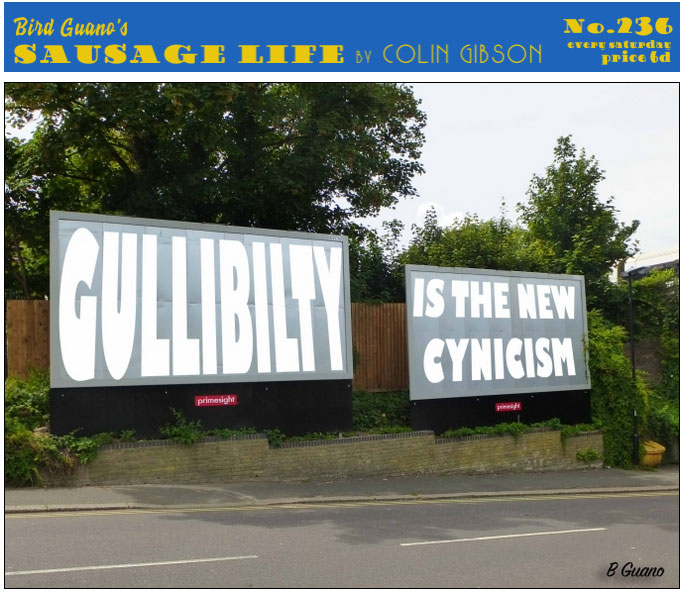 Bird Guano’s
SAUSAGE LIFE
The column which thinks that once fame has eluded you, notoriety is your only man

CHAPTER ONE
Bellicose thunder rumbled, forked lightning crackled and fizzed; the firmament was visibly upset – downright distressed, if you want the truth. The brooding, bloated, slate-grey sky spilled its miserable tears on a thousand impotent, protesting umbrellas. Suddenly……
READER:  Hang on! What’s all this?
MYSELF:  It’s my novel, it was a new year’s resolution which I am just getting around to.
READER:  A novel! That’s more like it! What’s it about?
MYSELF:  Well I don’t know yet; I’ve only done the first page.
READER:  But surely you know what it’s going to be about?
MYSELF:  Obviously I won’t know what it’s about until I’ve written a bit more.
READER:  Why not write the last page next? Then all you have to do is fill in the bit in the middle.
MYSELF:  Thanks! I hadn’t thought of that.
READER:  Any time. And while you’re at it, a few laughs wouldn’t go amiss.
MYSELF:  I’ll get on with it.

SOCCER TRAGEDY
As Hastings & St.Leonard’s Warriors fans celebrated the financial windfall of Billionaire Russian Oligarch Vladimir Nosferatu’s recent purchase of the club, which they hope will rescue them from the doldrums of the Nuclear Waste Disposal Solutions League (south), a reminder of the club’s troubled past reared its euphemistic head.
Mr. Chorizio, The Warriors’ former mascot, appeared at Cockmarlin Crown Court last Friday charged with being drunk and disorderly whilst dressed as a salami.
The jury heard that Mr Chorizio  had been engaged by the club’s former manager, flamboyant Spanish sausage manufacturer José Pypebahn, against the wishes of Warriors’ fans, many of whom had decided to mock him on a specially set up twitter account named “Sack The Sausage”. Karl Spüunbender QC defending, said that Mr. Chorizio, (real name Norman Rhodes), had asked for 517  similar offences to be taken into consideration, and wished to apologise to the court for his irrational behaviour, claiming “something very odd happens, when a man is forced to wear a sausage suit for a living, particularly when suffering from the kind of anxiety caused by being the butt of penis-related jokes.” Lord Justice Percival Badwigge adjourned the proceedings pending a social report and remanded Mr. Rhodes in custody.

STOP PRESS: Rumour has it that Elton John has just asked David Furnish to take a paternity test, claiming that “he couldn’t remember being pregnant”.

TEDDY BOYS IN BLUE
Police in Estonia have been issued with teddy bears. The cuddly toys will be equipped with 30,000 volt taser guns concealed in the arms and tiny teargas launchers built into the eye sockets. Not to be outdone, Hastings’ Chief of Police Hydra Gorgon has reportedly ordered 500 pocket-sized copies of Harry Potter and the Policeman’s Balls which all constables will be obliged to carry after 8th August ‘22. Questioned about exactly how much of a criminal deterrent that would be, she replied enigmatically, “The last two pages are missing”.

LANG MAY YER TRUMP REAK
Donald Trump, from his reinforced bunker at Mar-a Lago has revealed that he is partly Caledonian.The member’s bar, The Nineteenth Hole has been wallpapered in the distinctive yellow and orange McTrumpie tartan and renamed The Scorch Room.  The family coat of arms of a golden eagle laying an extra large free-range golden egg is now displayed prominently in the baronial dining room, replacing the bust of Adolph Hitler. Donald’s grandparents, Hamish and Dougal McTrumpie, made their fortunes manufacturing mildew-proof woollen condoms and midge repellent for troops in the Anglo-Scots wars of 1066, and are believed to be the masterminds behind Hadrian’s Wall which was erected to keep out illegal British immigrants and Muslims. The great bard Rabbie McTrumpie allegedly wrote his tender love poem Ae Fond Squeeze, from a lap-dancing club hidden deep within its fortified battlements.

DICTIONARY CORNER
Many people have asked me to clear up the difference between oxymoron and tautology. For the record, an oxymoron is a figure of speech in which words with opposing meanings are used together, often for effect. Example: Tracy Emin, artist, whereas tautology is the study of ancient educational techniques.

NOT CRAFTY ENOUGH
How on earth do we expect run down south coast resorts to become Shoreditch-on-Sea, when they are so clearly out of touch with the world of modern retail marketing? In Hernia Bay for example, one is forced to buy candles and cushions at separate shops, which are on opposite sides of the road. How much spare time do they think we have?
Is it any wonder that people are deserting the high street en masse and flocking to online retailers like www.candlesncushions.com?

AT THE THEATRE
The first night performance of Dame Labya Thrush’s seminal play The Song of the Goldfish (reviewed elsewhere), attracted a star-studded audience which included Hastings’ eminent inventor, Professor Gordon Thinktank.
During the interval, he took to the stage to demonstrate his latest contraption, The Theatrical Periscope. Powered by compressed air and concealed inside a mechanical hat, its patented adjustable height feature affords the user an unobstructed view when seated behind a very tall person, or one who declines to remove his enormous hat.
“There are teething problems,” the professor admitted, “one of which is that the device itself is housed in an extremely tall hat. Effectively, this means that the person sitting behind the wearer will now have his view obstructed, forcing him to resort to his own Theatrical Periscope, with the the height adjusted accordingly. Inevitably, this will result in a sea of periscopes, each one taller than the other, which will stretch all the way to the back row.”

View all posts by Colin →
This entry was posted on 30 July, 2022 in homepage and tagged Colin Gibson, SAUSAGE LIFE 236. Bookmark the permalink.

One Response to SAUSAGE LIFE 236