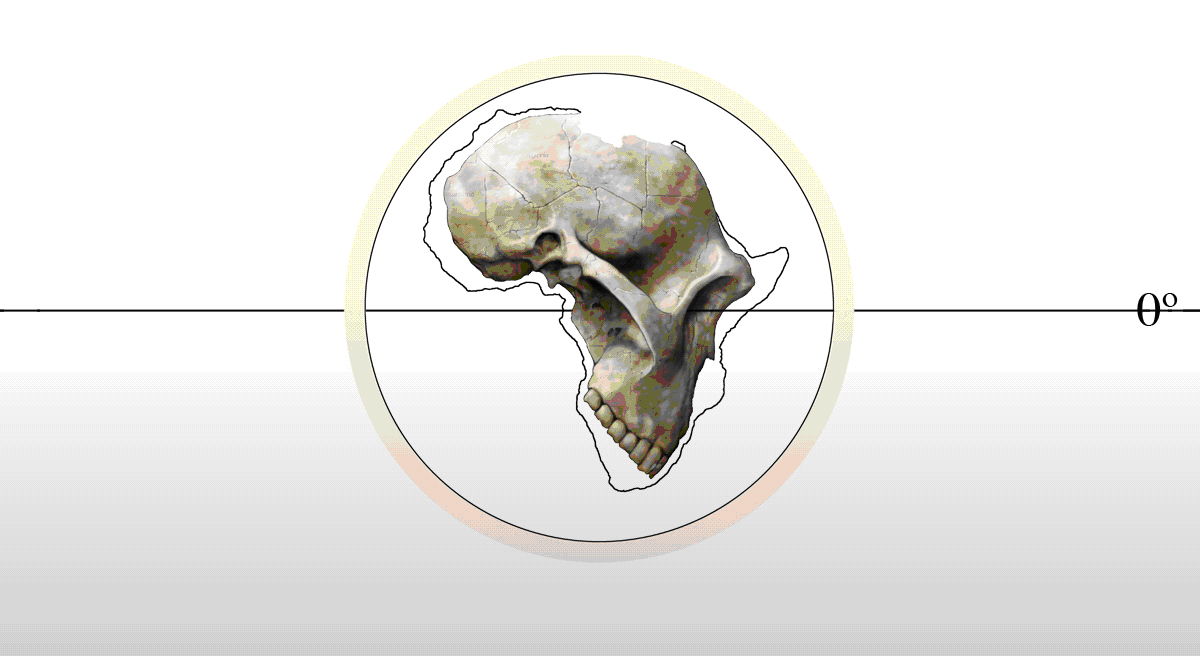 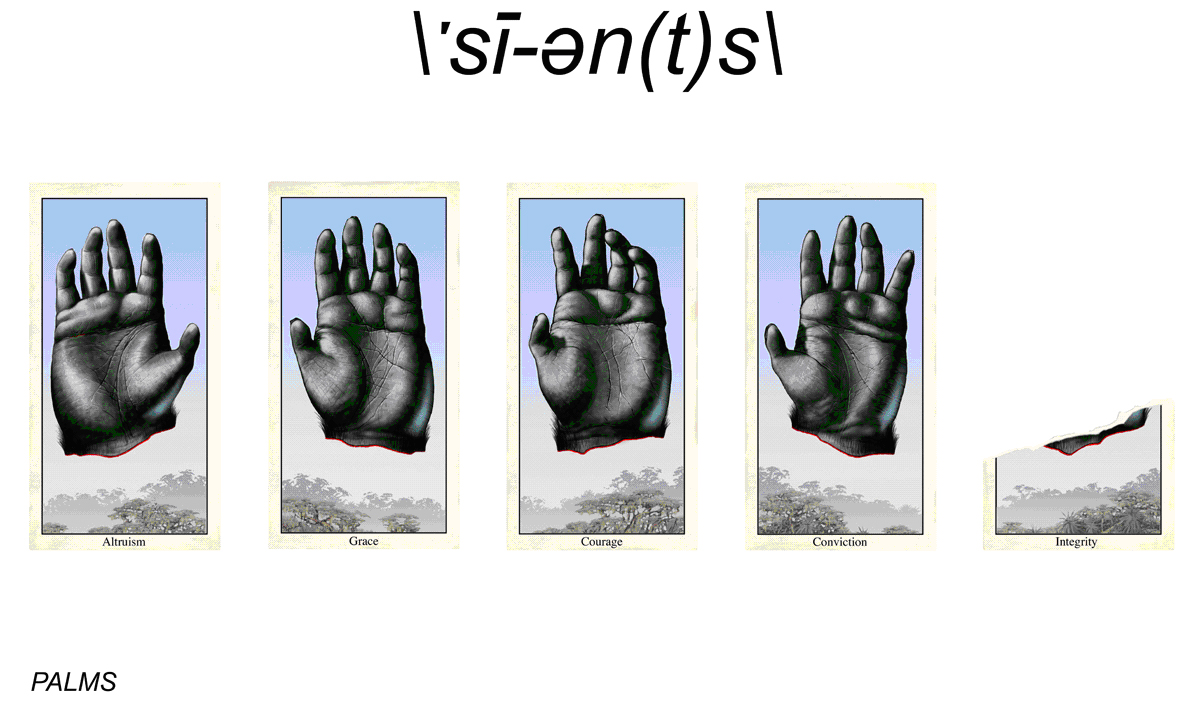 AUSTRALOPITHECUS AFRICANUS was a proto-human thought to have lived between two and three million years ago. When the skull of such a creature is rotated within the outline of Africa, so that the maximum number of correspondences is achieved, its eye-line matches the equator, and the point of emergence from its eye socket, almost exactly defines the spot where it was FOUND.

Such an alignment is highly improbable, yet it is scientifically meaningless. It would be no more or less so if the correspondences matched one hundred per cent. All that would increase would be our sense of disquiet.

“When you measure what you are speaking about,” said Lord Kelvin,” and express it in numbers, you know something about it…” The image CAN be expressed in numbers  – position, distance, volume, time, are all present and all quantifiable yet they are still meaningless. SCIENCE concerns itself with practical application, but there is nothing useful in the image. It cannot be put to work. It cannot be commodified.

The diagram suggests a different kind of SCIENCE, a different kind of knowing. Like a key turned in a lock, the skull opens a dialogue between versions of ourselves -past and present. It is a map that tells us we are HERE. Like all maps, we look to it in order to determine our sense of direction, our possible future in space and time. This is suggested by the place where the skull was found, an imaginary demarcation called Zero. Zero as in nothing. Nowhere.

It is a diagram of our fundamental dilemma: an awareness without meaning, manifesting in the transitory moment between past and future in a location without definition. It is the map of a here that is nowhere.

It is the SCIENCE of disquiet… 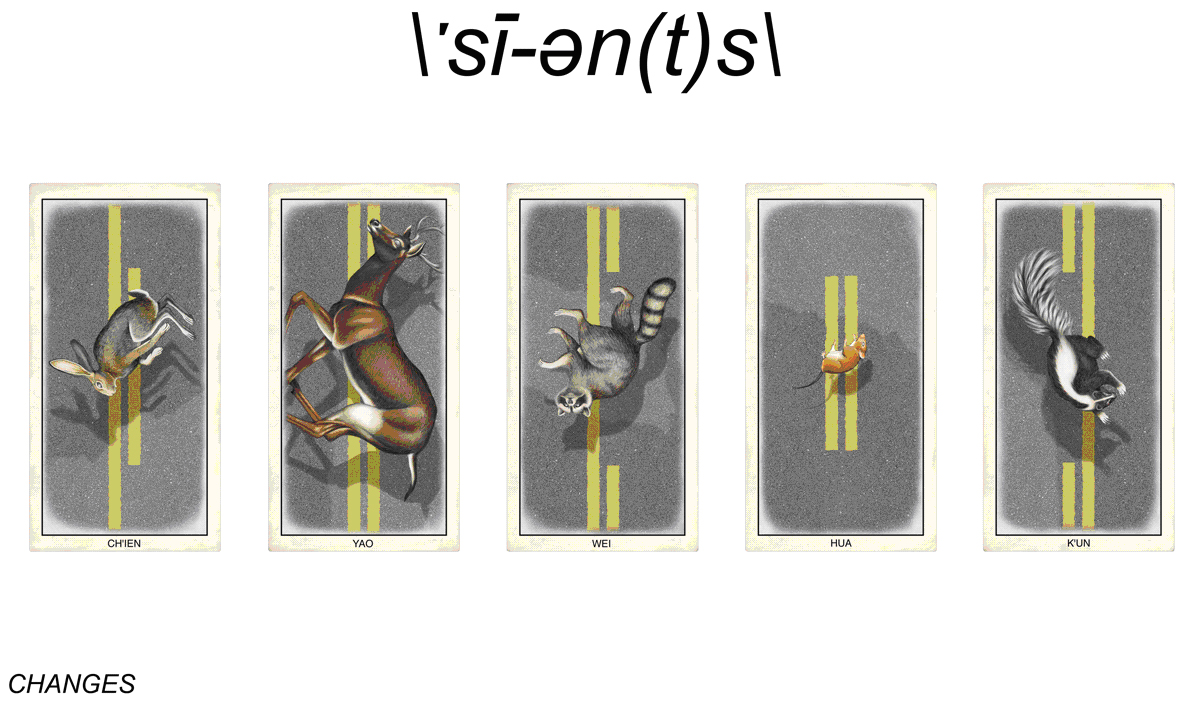 I-CHING is an ancient binary system of CHANGE, a kind of Ouija, Morse Code from the circumstantial beyond, proposing trend and propensity. Changes, good or bad, are suggested by solid and broken lines, similar to those on a freeway: I-10, I-40, I-95, I-Ching. INTER-STATES. They indicate when to pass, when to stay put or when to pull over altogether.

Like Astrology, Palmistry, animal guts, or any other method of divination, it is a system that works on the nudge principle. A turn in the road reveals an unexpected arrangement of lines, prompting the driver to respond accordingly, each configuration implying a particular set of circumstantial possibilities relevant to the driver’s point of view. They are for his or her benefit alone, meaningful above all, only to those who drive in this life, not those who are driven over… A cigarette stub embodies the passage of TIME, the quality of that time and the manner in which it was spent. Some cigarettes are discarded midway, others smoked to the quick; some are carefully extinguished, others ground out with force. Each is the record of a particular expression of thought manifested in time – the expenditure of life currency in the form of ideas.

The so-called universe – the one we perceive – just like the lowly cigarette, is also the record of events since passed. It too is a simulacrum, the image of time spent… 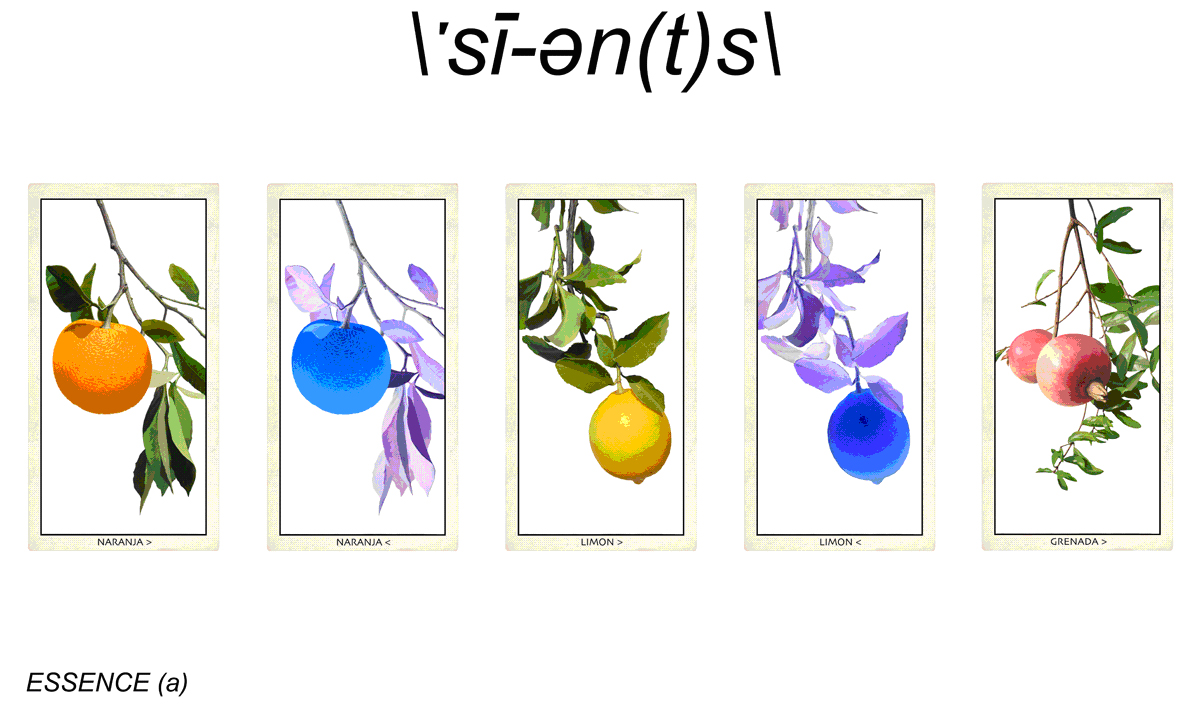 When light strikes an orange, the color we perceive is that which is not essential to the orange. What we see is the color the orange rejects, the color it does not need. An orange – in ESSENCE – is everything BUT orange.

That particular frequencies of light are absorbed into an object, while others are not, implies an energy discrimination that is vital to the object. What we see of the world as a result are the leftovers, the residue, everything that the world – in ESSENCE – rejects.

As Mrs. Martin Luther, once aptly expressed it:
“The colors of the world are the excrement of its soul.” …

We each have a map of the future in the PALMS of our hands, a future expressed through the crisscrossing of lines. These lines must first be “crossed with silver” in order for directions to be revealed – time and money go hand in hand. As with all forms of ‘divination’, it is a privileged system of insight enjoyed by one mammal species alone. As with all forms of LIFE, some mammals have more time on their hands than others.

Conservation is an amalgam of SCIENCE, superstition, sentimental anthropomorphism – and a superior sense of purpose. Self-awareness, inevitably imbues human mammals with a unique relationship to the rest of Nature and the unrelenting onslaughts it throws against them fosters an antagonistic dynamic in which every possible resource is used to mitigate its effects. It is a process without clear directive that results in methods that are often momentarily effective but destructive in the long term. The human endeavor is iatrogenic: a system of remedies to an intractable condition, often proving over time to be more detrimental than the original problem.

The colonization of Africa epitomizes this dynamic: the continent’s natural resources have been considered fair game for centuries, including its indigenous human populations and other wildlife. During that time, exploiting any and all forms of life in the interest of science, consumption or simply for fun has been par for the course. It has continued unabated to the point where several species – including indigenous humans – no longer exist or are on the verge of extinction. This has suddenly and belatedly become a matter for concern. Inevitably it is addressed with the same sense of superior insight and conviction that caused it.

The fact that life forms have disappeared at a fairly consistent rate for millions of years, regardless of human beings, and the possibility that NOT to exist is a more desirable state than existing, does not deter the compulsion. Those forms that fall within current parameters, i.e., ‘fashionable ‘, parochial human considerations of worth, must be saved.

A hierarchy of other mammalian life is organized according to an inspired sense of ascendancy and significance. The “Good Lord” apparently created the dove and the shark but He chose the dove to represent Him. From that divine precedent stems a system of preferences in which, ‘intelligent’, benign, exotic, cuddly, and cute are characteristics afforded priority – especially if they are RARE.

Attitudes to other life forms have changed throughout history and differ from culture to culture. At any given time or place, not all humans are necessarily exploiting the same resource for the same reasons. Gorilla hands are thought by certain cultural groups to embody the means for increasing sexual potential; along with various other animal parts they are enlisted as aids to sexual interaction. The same preoccupation with ‘ROMANCE’ that drives some groups to believe the creases in the palms of their hands suggest possible sexual strategies, drives this particular human subset to believe the DETACHED hands of other mammals provide similar advantages…

Larger versions of the images can be seen here.

View all posts by MALCOLM →
This entry was posted on 5 July, 2017 in homepage and tagged Malcolm McNeill. Bookmark the permalink.