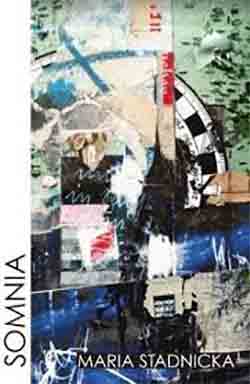 Without intending at all to mirror the ‘Four Movements’ of the poems in this book, I do think that exactly, or within one, I match them numerically [not thematically] in my reading. First and foremost, this is a wonderful collection: every poem is an evocative and moving vignette of personal/persona observation at its most poignant as well as uncertain. As readers we cross over surprises to arrive at others – the spaces between are landscapes of everywhere we have and haven’t been, transient like some memories, and as fixed as recurring dreams.

On Maria Stadnicka’s website Never / Hungry / The / Poem / Is, there’s this beginning to an apparent description of the collected poems’ narrative and meaning

‘If Cain and Abel played the piano, Somnia would have been a piece written for them.’

Starting here, we can observe that Cain and Able are the myth of good and evil aligned; they are yin/yang; they are Morecambe and Wise, and they are musical.

And we could then think that two people playing a piano together might choose either the ebony or the ivory keys. Of course, this would be simplistic, so sitting side by side they play the lower and upper keyboard on the same theme. In listening to Schubert’s Fantasie in F Minor, I hear the choice made between rhythm and melody; in watching, one portion seems more complex than the other, but in terms of significance, that would be interpreted by individual judgement/preference.

But the poems in Somnia are more than just such bifurcations, and they do present varying layers of observation/perspective – from the diametric of

‘We practice human
squares and circles’

to the holistic hopefulness of

‘pretending to see the whole’

‘From time to time, we stand
between a wolf and a dog’

So I’m now considering how often the choices we make or think we have made leave us feeling anxiety and guilt. In the following poem – which I present in full – whilst the selection was binary, it is from a significant dichotomy and the outcome gets a satirical telling

a beauty company sent me an email,
We win, you win, it said, invited me
to purchase youth serum at half price.

There is something I hate about emails
sitting like this – urgent black on screen:
comma after verb, mistaken for breath
taken when reading poems aloud.

Please, do not reply, it carried on
we hope to see you again.
I rush to the bathroom to see
how deep the lines
have grown since I last checked.

Skin tracks’ network shows
how much I’ve won in forty years
of living too small, dreaming too big.’

Yet this is possibly by the by. These poems, allegedly the testimonies from ‘a group of people who witness a crime as they come out of a cinema’ [further from Stadnicka’s website], all collaborate in multiple oblique observations/perceptions – each poem a unique revelation of its moment. In Mundane Evil, a hallucinatory wake prompts this from the watcher/attendee: ‘My womb coughed out pieces of rubble’; in Kafka, once opened, an envelope meant for someone else spills out and reveals ‘a pair of handcuffs and/steel neck chains…’, and in Woman Walking, a beautiful, elegiac reflection on a mother, it concludes with another glimpse glimmering

‘Mother went silent – maybe she fell asleep –
and her nightdress turned into snow.’

Above all – as an entity – the poems so often reveal their menace in pervasive rather than direct ways. Two stanzas from the moving poem Siege illustrate:

[2nd]
‘Another boat must be capsized
and the souls tried to escape
through a recently painted door.’

[4th]
Fishing nets return empty.
Mothers’ tangled hair gets caught
in a fight with waves bigger than them.’

On reflection, when I wrote earlier how these poems ‘collaborate’, that is technically inaccurate because it sounds intentional – as if there is a shared purpose. Rather, they work in partnership by a different kind of sharing: obviously, the poetic which is the richly imaginative connections across and within the poems [the superb impact of all], and then there are the forces beyond individual control where our lives are determined by a common dissembling of what we thought was free-will and personal, decisive experience – and this is what we consistently read in them.

And now moving on, these poems are collectively about how we use language. In one thread, it is the language that tries to explain war and conflict: ‘Blessed be their bullets;/many have dropped over us’ [Landscape with Knives]; ‘…reading Nausea;/his baby wails in a pram chewing a rifle.//From a distance the gun fires at us.’ [Traffic]; ‘Business as usual./Gunshots, grenades, mortars.’ [Landscape with Buses]. In another thread, it is language itself, explored – naturally – in the poem Poetics, then more obviously in everything, as here in Fruit Season

‘Where we sit, language tastes of meat,
of cubes on neck-throat-tongue
in a process of decompression.’

When I first read the last word of that stanza, I thought it was ‘decomposition’, alluding to the world in a constant flux we try to capture through our words, if only for that moment, and before its dissolution.

Lest that sounds just negative – though surely the sense of fracture and shifting in our current lives is inescapable – there continues to be a balance to offer in the paradoxical, but still found lyricism within the dislocating words/worlds of two truly fine poems, Nervous Twitch and Frost.

Somnia is consistently alluring and enigmatic in its poetic voice. What compels isn’t just the draw into many mysteries, but also Stadnicka’s calm creativity in conveying, for example, the horrors and/or abstractions of these – her poetic voice completely comfortable in its suggestiveness: inventive, provoking, highly visual, as in the last three stanzas of Spring Cleaning

‘I wonder what butterfly meat tastes like,
if sliced with a silver blade; what mother tasted like
the moment she released me – honey coated pearl.
I smell the skin on my wrists: mother’s hiding place.

The day she left to buy bread I tell Clara,
she had stilettos, a hat, mid-eighties permed hair;
grown long to her ankles by now.

…she sets fire to old carpets,
fibres curl, briefly spark, die off in smoke.
Our dolls rest on rubbish bin’s lid.
The house fills up with mid-eighties permed ashes. 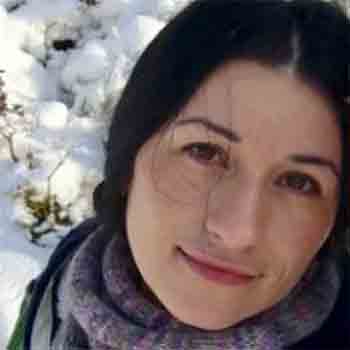 Somnia is available at https://www.knivesforksandspoonspress.co.uk/product-page/somnia-by-maria-stadnicka-74-pages