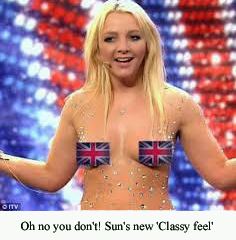 The laughing Nazis’ favourite UK redtop ‘The Sun’ has finally banned tits from page three, but not wanting to let all its trusted traditions go at once has ensured they keep running the paper.

International tit-head, arch media villain and owner Rupert Murdoch explained the thinking behind ditching the 44 year old tradition, cackling from his Tasmanian cave, ‘There was a rumour about feminism or something boosting circulation. Anyway, fuck your traditions. I already have more publications than the new weather supercomputer can count all plastered with enough hardcore porn to make a football stadium full of Madonnas die from heart attacks. Remember, I will do anything for money. Literally anything. I mean absolutely anything at all. Never ever think there is something I will not do for a few more quid. Whatever you can imagine – and even things that you dare not even think – I will do. Heh, heh.’

Ex-Sun editor and media nipple Piers Morgan threw his worthless opinion into the news bin bleating, ‘Nothing lasts forever folks. Even my incredible career as a TV presenter was bound to end one day when someone realised that my opinions and indeed my entire life, philosophy, outlook and complete belief system are utterly meaningless.’

Joey Essex, the UK’s biggest dunce, general tit and all-round towney idiot, widely considered to be in pole position to become the paper’s new editor, joined in the vibrant moral polemic tweeting from a yoyo shop, ‘Am I me?’

Danny ‘Double D cup’ Davis, page three glamour photographer for the last twenty years, coughed from his filthy cellar in London’s Soho then wiped his hands on his grubby vest, put out his cigarette in a half-eaten Chinese meal and wheezed, ‘Actually the truth is every old slapper in the country who would get their norks out for a fiver, and their mum, had been splattered over page three. It was a case of going back through the list or getting some right ugly slags in from China. We had literally scraped the bottom of the country’s dirty barrel so many times it had fallen off.’

Fans of the Sun’s blatant sexual objectification of women will not be entirely downhearted as it has been revealed that the paper’s management are planning a new ‘classy’ ‘feel’ for the slimy old rag. Now only meaningful photos of women will be published frolicking on the beach wearing minuscule bikinis or having their genitalia covered with cakes, pets and other sexy household objects. High-ups at the ‘Current Bun’ claim that this proves, once and for all, that they do not consider women merely as sexual objects but recognise their integral role in society as other useful things like shelving, kennels or wine racks.