The Idea of the Igloo 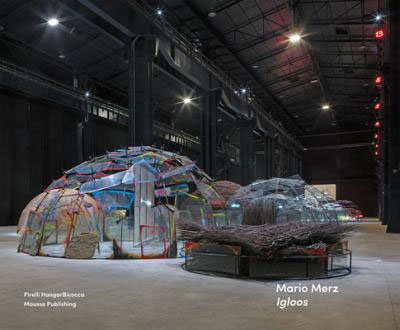 I grew up on tales of valiant exploration. Captain Scott was a hero of mine, and several other polar expeditions featured heavily on my bookshelf. Igloos were an alternative to the tents and sheds that Scott and his men built; they offered semi-permanent warmth and shelter, a way to keep warm as the wind whistled outside, an early example of ecologically sound architecture, made from and in a particular landscape.

Artist Mario Merz repeatedly came back to the igloo form in his sculpture, but subverted it. His igloos were made of sheets of glass, iron, wood, metal and stone. They did not offer shelter, but hinted at danger, misconstruction, human waste and danger. He spoke (and speaks in the book) of ‘the impossibility of architecture’, but also notes that for him the igloo is ‘the simplest way to articulate space’. I for one would question this, surely a stretched string or a simple placed slab is a much simpler way? Anyway…

He goes on to add that his igloos are also ‘the simplest way to evaluate three-dimensional space’, noting that ‘[t]he igloo is a “border zone between full and empty”.’ So these sculptures are not only about themselves, as sculpture, but also about what surrounds them, they each respond to a space and also create their own space. This is rooted in observation: ‘For Merz observation is central: his sculptures use what is ready at hand to observe, rather than explain, the habits and forms that make up our surroundings.’

This evidences links to the Arte Povera movement, which Merz is often critically associated with, but also suggests a social critique, although it is hard to see how the intervention and insertion of igloos into a public &/or exhibition space explains human habits and forms. Certainly, however, they articulate the space and respond to it – although each igloo can then be moved to be exhibited elsewhere, so they are not as site-specific as some of Merz’s and his critics’ comments suggest.

This recently published, beautiful hardback book is a rather belated companion to a huge 2018-2019 exhibition of Merz’s igloos in Milan. Thirty sculptures were assembled within the hangar exhibition hall along with a small group outside, accompanied by a neon Fibonacci sequence. I’ve only ever seen two or three actual examples of these igloo sculptures and the many photographs in this book make it absolutely clear how wonderful and diverse this gathering was, how different each and every igloo is, and how they accumulate interest and meaning in relation to each other.

Merz isn’t the clearest of thinkers, it has to be said, his statements and interviews here can be obtuse and tangential; there appears to be no clear formal philosophy  at work (and it isn’t always helped by the sometimes awkward translations into English). He is prone to talking of universal energy, the globe (as a concept rather than anything specific), sensation and memory, of signs and symbols rather than the concrete or real. And apart from an initial wonder at how the Fibonacci series works there is no real explanation to why Merz often iterates and reiterates this number sequence in his work – it doesn’t seem to have any direct link to domes or even spirals, let alone his construction methods or materials.

But let’s not pursue that line of argument any more. It does worry me when artists can’t articulate process and concept or speak clearly about their work, but I’d also be one of the first to say that work should be able to stand alone without context or even museum or exhibition labels, let alone explanations. Context and critique is extra, not where to start. 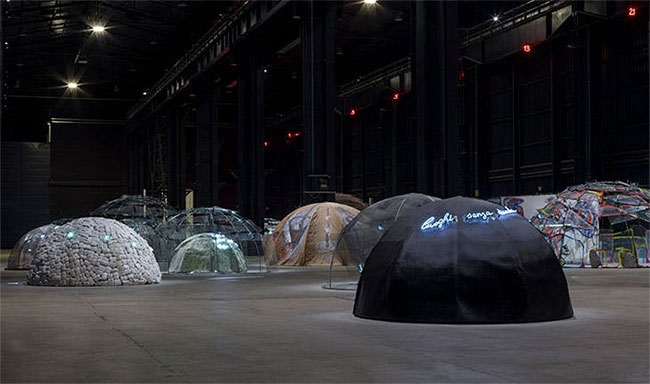 But this is a book review, not an exhibition review. I can turn to the second half of the book and be amazed at this city of igloos, at the diversity and range of these domes. Some are scaffold skeletons, others more like yurts, complete with painted signs and sigils on. Others use neon signs or coloured paint to articulate edges, planes and curves. There are brushwood igloos, stone igloos, metal and glass igloos, and one with a stuffed deer on top. They are amazing and intriguing, they make me ask questions which don’t appear to be answerable, certainly not by the artist or the contributors to this book.

But maybe awe and wonder and provoking questions is enough? Merz is an artistic explorer, someone navigating three-dimensional space(s) in an original and fascinating way. He may be inconsistent and confusing, he may not always make sense in what he says, but sculpture is his language, not words. This catalogue is a wonderful addition to Merz documentation and I only wish I could have been in Milan to see the show for real.

View all posts by Rupert →
This entry was posted on 13 February, 2021 in homepage and tagged ed. Vicente Todolí, Mario Merz. Igloos, Rupert Loydell, The Idea of the Igloo. Bookmark the permalink.