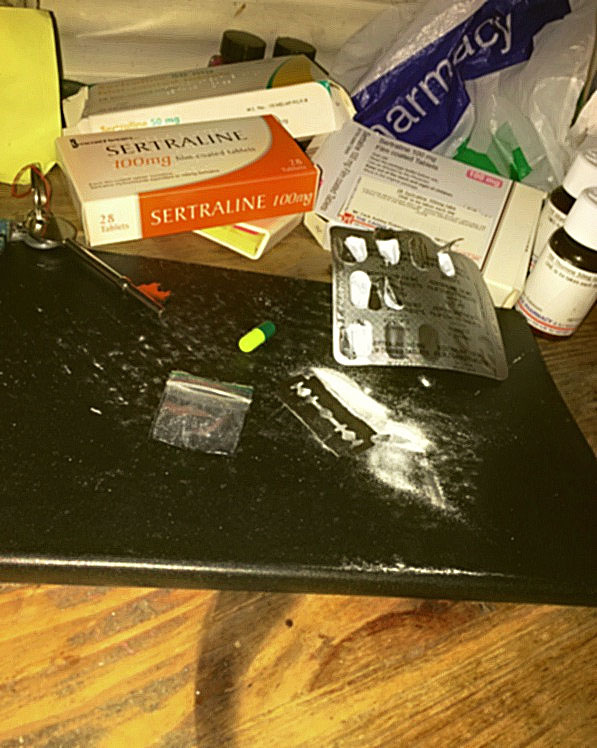 Come what way, being alive is a smog of sorrow and pain, and passing time will never prove us wrong.

Remove from the ground a typical piece of fruit.

It is always suffering.

Have you ever been at the centre of a long-running unconsciousness involving Akathisia?

I have, I was spiritless and scared.

I was sitting in my folks recently renovated show home

It was 6 pm, dinner was placed on the table hot from the stove

I dreaded dinner, I hated food, and I never ate.

A mixture in the mind of a sickening junkie.

I liked them [the tabs], but they seriously stressed my bowls.

My old man has an old mind. He works 7-days a week, never gets ill, loves a drink, and is always on a winning streak.

I was secretive towards him with reason.

So I sat down in front of a small plate of salmon, peas and potatoes.

I reached for the salt and pepper and a squeeze of lemon.

I took a small bite of the most divine salmon, forced me to skip a breath due to its rareness.

But then it hit, Splat! like a fucked up pigeon just met with a window.

It was not a dud feeling, every single hair on my arm was now fibrous.

A cold thought came the second I closed my eyes.

I woke up around 6:30 pm in pitch black. Two hours after dinner. I held my hand in front of my face and felt the cold silver from my bracelet. My stomach turned and played the sound of a controlled vibrato. Nausea felt disgusting, a fuckin’ corker that sent me down. I thought I could control it, but each inhalation felt like the swallowing of my own black stool; curdling with a jet of stinking farts that travelled throughout my Anterior.

Try to explain a universe of paradox, like the story of The Great Gatsby – you can’t win them all but you can try.

The chronic diarrhoea hurt my ass like the first dick and demanded a reaction more vicious than the star-spangled flag is to this world. The narcotics fizzed among my stools creating a bleak orientation that compelled illness inside of me. It took over my body in every way possible, slowly turning me into a cold incubus. I stumbled 5 yards to the toilet from my bed for a good three hours. My mum kept me warm and occasionally patted my forehead with a damp flannel. I had the wrong attitude of being afraid, as her grip on my hand tightened and almost hurt.

For the next few hours, I slid into darkness through a bottomless pit. In a new dimension, I travelled around an unknown sphere. My parent’s faces switched between reality and animation, shifting between man and woman. I tossed and turned trying to flee from the lion’s face that had suddenly formed in the paperbark maple tree outside my window. I went on and on, until wet through to the cotton sheets and lying in a puddle of anxiety. The hallucinations deepened, leaving my body in spasmodic stroke. My only recollection of feeling was on the surface of my skin. The hairs on my body felt like a warm shadow in a casing of needles. Causing conflict with each movement, before my thoughts suddenly turned to time.

111 the number of reality

As I rested the phone on my cheek there was an unpleasant hissing sound in my ears. I was oblivious to who I was talking to, or even where the voice [man or woman] was coming from. But the questions began: –

Can I ask your name and your age? – Are you on any medication? – Are you comfortable? – Are you confused? –Can you talk to us please; we need to know? – How is your temperature? – Are you hallucinating, if so what are you seeing? – Is the room spinning? – Is your mind running? – Have you taken drugs? –Have you taken drugs, Zack, we need to know – Are you in pain or agitated? – Is it traumatic? – Is it tormenting? –  Have you had thoughts of suicide in the past two days, any abnormal co-ordination, abnormal movements? – Have you had thoughts of murder or sensory disturbance? – Do you think you need an ambulance? – Have you felt like this before? –Have you ever tried to overdose? Do you live with your parents, are you with them now, can I speak with them, please?

The voice on the other end of the phone reminded me of a familiar feeling, one which I got from a mix of Valium cut with Cocaine – a concoction I called ‘the rusty double’.

I came into contact with Benzos through an old friend, who had a prescription for the pills for his anxiety. He gave me a handful once in a while that I would take to help me sleep. It wasn’t a regular thing and it took me a while before I started to enjoy the effects. Before long, I noticed that it calmed me in social situations with large groups.

Aside from the feeling – my addiction to the two drugs combined was 50% scientific to my mood. I experimented with the drugs like a scientist – finding the perfect balance was key. The early effect was intense – a substantial burning in the nose was soon doused by the loss of feeling. A lesser perception of reality came later from the valium, it had all the apparent effects of opiates; with its magic, warm-weather type feeling. But unlike opiates, the rusty double allowed me to command my self-glorified mood.

After the phone call / Hospital bed

An appointment was arranged at the Manor Hospital. The journey to arrive was torturous. I dipped in and out of a daydream sleep with sickening thoughts of suicide. Fortunately, I had a pound coin for a wheelchair. I was shoved through A&E like an ornament of royalty, before being ploughed through a less bloodshed mental ward. I stationed among a few patients, that were also following instructions from a film coated substance that had been diagnosed.

I felt lost among the strongest split of personalities, with no one knowing who was who. It smelt like cat stink and the obnoxious kids cheered with great annoyance at the international football highlights. The hours rolled on, and after the third, I began to feel vexed.

Living doped on illegal drugs in a hospital in front of my parents left me sank into my chair; curled up like maggot suffering from sleep paralysis, with all my valiant attempts to interrupt the lethargy intercepted. The valium that night knocked me for six. The bitter taste of a lime as I licked my lips I couldn’t handle, already looking gaunt and skeletal, it threw my face in all directions. Scratchy and dry – but matching dad’s eyebrows was the least of my concerns as he looked uneasy, almost unhealthy himself. But still, he managed to pull off a smile that felt like a miracle.

Being woken up by a prodding doctor, still in my wheelchair but hidden behind a silk curtain was a comfort close to falling in love. After rubbing my eyes and carrying out a cross-examination of his existence, the diagnosis of my illness was revealed as an allergic reaction to my medication. I had undergone several tests and provided samples of blood, piss, and saliva. I had no recollection of this but was informed by my folks.

I had passed through hell and fell out on the good side. I had never really thought about the deceased, or pictured suicide next to reality. But on this day, it seemed someone who wasn’t present was looking out for me when the only way I believed I could be happy was to be dead.

A note from now

I feel better, a lot better.

Tweet
This entry was posted on 24 January, 2018 in homepage and tagged Zack –Ashley. Bookmark the permalink.