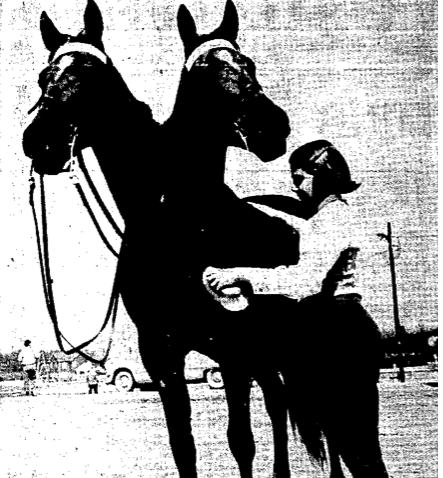 The horse was eating its porridge when the courier arrived with a letter in its beak. ‘Read it to us,’ the horse said, both heads speaking in unison. The vulture settled its purple tail feathers, tore open the envelope, and read in a croaking voice: ‘Her Majesty the Queen invites you to join her for elevenses this morning. You are advised not to be late.’ A servant with the face of a clock stepped forward. ‘Half past nine,’ said one end of the horse. ‘We’d better get ourselves groomed,’ said the other.

After half an hour of brushing, scraping and combing the horse looked brand new. Its pale green coat gleamed. The two blonde manes had the texture of silk. The hooves shone so that they could see their reflections in them. ‘After you,’ said one end of the horse. ‘No after you,’ said the other. The first sighed. ‘We better take the palanquin.’ The ornate contraption was carried in and the two-headed horse installed. Six pangolins bore it away at a dignified pace. They arrived at the royal palace as eleven struck.

The Queen, as usual, was swathed in clouds of damask, her face covered by a featureless mask of the finest porcelain. She was said to be extremely beautiful, though only her maids knew what she looked like, and they were sworn to secrecy. ‘My loyal subjects,’ the Queen said, addressing both ends of the horse at once. ‘Or should that be subject? We need your advice on a matter of state, and since two heads are better than one, we have decided to consult you.’

Dishes of steaming hot chocolate were served with pastries, and duly consumed. When the horse had finished, the Queen continued. ‘Improbable as it may seem, we will soon turn one hundred. Should we abdicate in favour of our nitwit son, Prince Halitosis, or continue until we drop? We would value your counsel.’ The two heads bowed, and the horse retired to consider this thorny question. Pacing backwards and forwards in the palace gardens, it argued with itself for over an hour, reviewing the pros and cons of the two options, the consequences for state and nation, the line of succession, and many other weighty matters, but the two heads were unable to agree.

‘I should have you decapitated,’ said the Queen, who was extremely vexed. ‘But at which end?’

Tweet
This entry was posted on 4 June, 2022 in homepage and tagged Simon Collings. Bookmark the permalink.