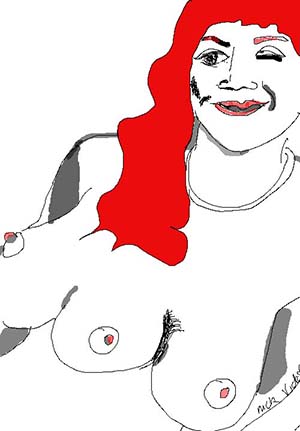 The female mammary organs have become a powerful focus in the contemporary male’s assessment of the ladies.

This focus verges on borderline fetishism and such is its power that girls, young and old, flock to have their breasts pumped up with silicon, all to catch the eye of males, or to boast amongst themselves when displaying their latest enhancement.

One views with horror the gruesome results of this practice which may occur in later life, and in passing speculates as to what might transpire were this male fixation to transfer it focus to some other location, such as a lady’s nose.

However, fashion is fickle and it may be that someday this obsession with size will be superseded by a far more interesting value system.

In youth, my sexual inclinations were not as others. The large breasted Goddesses of the cinema did not excite me as they did my fellows and at that tender age I found this discomforting. It was not until I was browsing one day in a bookshop that I came across a science fiction magazine and discovered the first clue to my condition.

The cover depicted a horde of ape-like beings confronted with sword in hand by a beautiful half-naked Amazonian female. Although perfect of visure and faultlessly proportioned, it was not these aspects which drew my attention, but rather the startling fact that she had three breasts. The power of this image stirred strange and unknown feelings in me and I felt compelled to purchase the magazine. I would then gaze at this picture every night before sleeping and her presence soon began to haunt my dreams.

However, although strangely exciting, the image of the three-breasted lady still left something to be desired, as if she were merely the doorway to another and as yet unknown world. But where could that world possibly be? Thus the dilemma began to dominate my waking thoughts and it was while in this bemused state that a friend (who was travelling inIndia) sent me a picture postcard. Instead of the expected view of the Taj Mahal or some such other architectural wonder he had chosen to send me a picture of the Goddess Lalitma, and as my eyes fell upon her my body rippled as with an electric shock.

At last I was face-to-face with the object of for so long my secret desire, for, apart from her radiant beauty and open, welcoming arms, there, in a glorious well rounded row were seventeen magnificent breasts. This moment was my birth into full sexual awareness, and I realised that my criterion was not the normal one of size, but instead, quantity was the trigger.

Yet sadly, with this awakening came a desolate observation: how on earth would I ever find satisfaction with the woman of my dreams? The answer was that I could not, except perchance in some freak show where, although having the required number of mummeries the lady might well be a midget to boot.

No, my original tri-breasted beauty had literally been pointing to another world, and so began my long vigil. Someday I know when aliens are running our corner shops, I shall one day round a bend and there she will be.

How can she fail to respond to my deep ardour? No, she will I know succumb, and then in some cheap hotel room near the spaceport I will at last indulge my passion for the first time. I anticipate that moment as, with rising excitement and trembling fingers I first unhook, and then remove like a string of frilly pearls, her multi-cupped bra.