“Every one hates wasps,’ people insist with a self-righteous fury
As if anyone thinking otherwise was beyond all reason:
“What on earth was God doing making wasps?” a child exclaims
At a picnic or in a kitchen, or anywhere. “We hate them”.

And the child seems to imply that the whole of creation’s at fault
Because of this unwelcome bug in the system,  “Oh go away!
“Why are they so annoying?  What use are they? And they sting!
“Wasps! You’re horrible. You’re just pointless. So just go.”

“Right, I’ve told you; now you’ve had it,” Then someone tries to kill one
And, as in a self-fulfilling prophecy, someone gets stung
For a threatened wasp’s signal, if it should be picked up by its fellows,
Urges them to come to its defense, whereupon they sting.

Wasps then leave to pollinate a wild orchid, their speciality; or to farm aphids
For honeydew; or to make their waterproof paper nests –
This latter skill giving the Chinese the idea of turning chewed pulp into paper
According to Needham’s ‘Science and Civilization in China’.

This bio-mimetic act, or plagiarism, changed the course of history:
Without the wasp, paper might have been a rarity
And communication confined to papyrus or cuneiform marks
On mud and wax tablets or graveyard inscriptions.

“I still hate them,” a voice persists. “It doesn’t matter what you say,
“They’re hateful.  Absolutely anybody sensible knows that…”
After the war, which Borges said was as sensible as two bald men
Fighting over a comb, I was in a library in Buenos Aires.

It was the University library, on the banks of the River Plata.
It had been trashed by the Argentinian junta;
Everything was in disarray: books strewn about the floor;
Journals trampled, torn and out of sequence.

“This is what happened when we had our meetings here,” said Ana Cordoba
“They’d burst in. Then they’d throw red paint at us and leave.”
She pointed out tell-tale traces: glossy red drips on books and metal shelving,
“Then they’d watch us when we left the library buildings.

“They would know who’d been attending the meetings here, you see,
“Because of indelible splashes of paint on us.  They’d take us in,
“Then we were locked up and, you know… torture. Many people died.
“So you mustn’t talk to any of the police here, whatever you do.

“You know Eduardo? What they did to him? they bribed a small boy
“To run past him in the street and quickly plant something on him.
“So then they arrest Eduardo, take him to their place in a Villa Miseria
“Looks like a police station, but it’s not a police station. It’s a fake.

“Complete fake. Set up especially for police robbery. ‘What you got, señor?
“’Money? Credit cards? we take them then we let you go. Maybe.’
“And if you’re lucky they don’t have, how shall I say it, bad fun with you.
“They’re not what they seem. They sting you. Worse than your wasp.”

The city was a place where human beings persistently stung each other:
Seeing a beautiful woman through the peephole in his door
A friend responded, only to have three men enter, one with a machete –
Its blade pressed on his genitalia till he gave them his money. In England I’d once seen a striking picture of a South American wasps’ nest
In a Victorian book on unusual habitations of the world’s wildlife.
The spiky nest hung from a tree and it was covered in fierce protrusions
Shaped like inch-long thorns, seemingly to protect its contents.

Remarkable, haunting contents I’d not heard of before – the wasp made honey.
Its weird nest belonged to a species called polybia scutellaris
Which was only found in its pendulous paper castles on the Argentine pampas.
Its honey was said to be almost solid, and as black as obsidian.

“Did you find any articles yet?” Ana said, after more time in the library
Studying the remains of painstakingly comprehensive journals
Relating to Argentina’s flora and fauna, before the place was rubbished
By Galtieri’s Junta; and indirectly by England’s wasp-woman.

Two hundred years before, Dr Johnson had expressed wiser thoughts
About the Falklands: he’d said that there were just and unjust wars,
And wars which were just not worth fighting for, and that the Falklands
Fell into the latter category, being the sovereign domain of sheep.

In two hundred years little had been learnt. People still hated people
And people still hated wasps, to no useful purpose.
It occurred that if it was more widely known that wasps made honey
They’d be seen in a different light, and redeemed.

And if they did make it, what would it taste like – this wasp’s honey
Manufactured by nature’s Exocet missile?
Would it cure wasp stings? – as nearby dock-leaves soothe nettles –
Or allay the fear of wasps, namely spheksophobia?

Then if one wasp can make honey why don’t all wasps make honey
And improve their public standing?
Perhaps this one’s a mutant species designed not to die off like bees? ¬–
A hardcore hymenoptera producing punk honey. 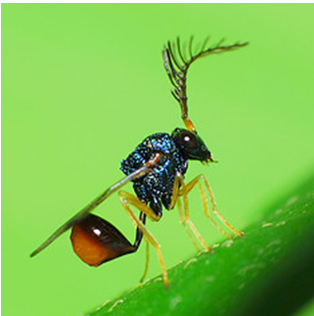 I’d chanced to unearth a metallic wasp, near where I’d ended up,
Which had a transparent abdomen like a portable honey-pot
And antennae like reindeer-antlers, looking more than usually alien –
It was a wasp that suggested wasps were capable of anything.

Then Jorge Godoy told me of a Guaraní Indian in the north-east,
On the borders of Paraguay, in the region of Gran Chaco.
“He knows the biography of every blade of grass. So he’ll know.
“He speaks good Spanish… Guaraní means forest people.

“Originally they came from the Amazon Basin seven centuries ago
To look for Iwy Mara’ Eye, ‘a land without evil.’
They were guided by their prophets, wearing their sacred feathers,
And by their Ava Yumpa which means ‘God man’.” 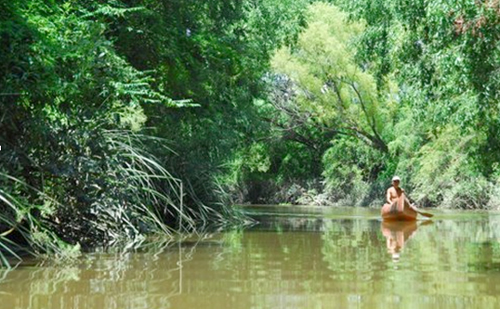 Jorge and I travelled to meet Manu on a tributary of the Río Paraná.
He greeted us with a brief word, sucked on his maté gourd
Then fell silent. “The spikes on the nest,” I asked, “of the camoati”
(The indigenous name) – “they’re protection from jaguars?”

Manu looked puzzled. I opened up the book I’d brought to show him,
‘The Romance Of Animal Arts and Crafts’
With its picture of a wasp’s nest attacked by a snarling jungle cat
And swarms of honey-wasps defending it.

Manu furrowed his brow. “No. Para ventilar. Caliente aqui.” –
The book evidently over-dramatized the nest’s spikes
Which were just there to ventilate the nest and keep it cool.
He grinned. “I’m more danger to this wasp than a cat.”

He explained this was because the camoati honey made him feel good
And that when he felt good it reduced his hatred
For those who’d stolen his land: Brazilians, Bolivians, North Americans
And Paraguayans. It was a consuming hatred.

The pytagua, or foreigners, had edged him from the land he’d lived on
For generations, reducing his people to living by roadsides,
But when he saw the wasp’s spiny fortress he could still feel happy,
For it held one secret which sustained him. 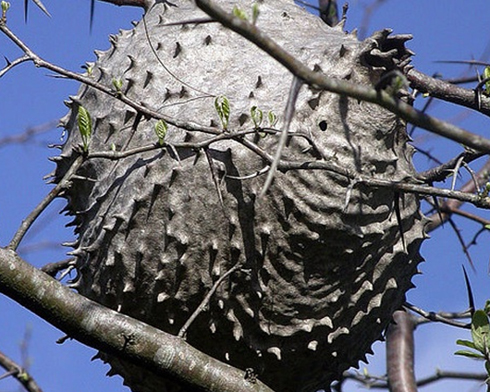 It was that “even this wicked wasp, he has learnt to make honey
And the wasp has to do this – despite his bad nature –
Because all those who want to live, have to be good in some way
But you must learn how to discover their goodness.”

He climbed up to prize clear a tiny portion of the elusive comb,
“I borrow a little for you. I don’t steal. It’s their honey.”
A squad of black creatures moved out of their thorny scrotal sac
To crawl onto him and conduct a chilling inspection.

A surviving article in the library had spoken of Guaraní wasp-honey shamen
Who’d murmur while they were collecting it and were never stung.
“They know I already have ‘mad honey disease’”, Manu laughed at our concern,
Then he turned back to continue delving while he hummed.

“These wasps feed on jimson weed flowers. So the honey contains atropine –
Lets you see how you’re going to die.” He handed us a bit of comb
Then he added, out of the blue, “Stupid people cause a lot of damage. Why?”
“Will this cure them?” I asked, “I’m still testing it,” he smiled.

It tasted strange, this paradigm-shifting honey produced by creatures
That the world has felt justified in so intractably hating…
An intriguing after-effect was an old enemy buzzed my consciousness:
He appeared to lean forward, then smile gently and wave.

Darwin made many references to the work of Don Azara,
To his studies of woodpeckers and black-necked swans
And to the five hundred other birds of Argentina’s River Plata
That Don Azara had captured and then pickled in brandy.

Darwin also drew on Azara’s studies of small Indian tribes
And on their methods of sexual selection:
Researches that found their way into Darwin’s ‘Descent of Man’
To fuel proto-fascist doctrines of the survival of the fittest.

Oddly however, Darwin overlooked Azara’s discovery
Of polybia scutellaris, the counterintuitive wasp –
And it’s still inconceivable to those liking things cut and dried,
To whom wasps are evil and so cannot make honey.

On returning to Buenos Aires I bought a brand new blank book,
A black Moleskine, and then made a whimsical note
Of the irony that man’s intellectual dependence on paper
Has made him a kind of Mowgli – civilized by wasps.

In San Telmo market, a pale, ailing couple with a wind-up gramophone
Tango elegantly to Milonga de mis amores –
Both parents of a boy drowned on the Belgrano, torpedoed by the British;
They collect money by telling strangers their story. 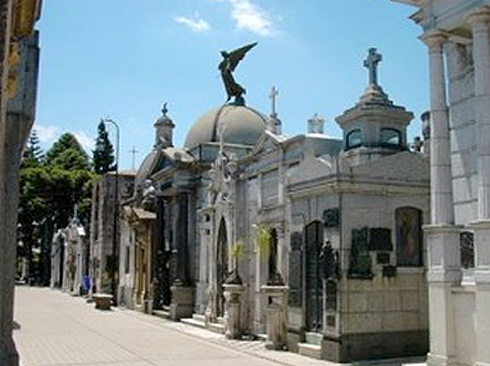 I saw a graffiti ‘LAS MALVINAS SON ARGENTINAS’ at the Recoleta cemetery,
Where a family’s mausoleum had electricity so the bereaved
Could boil a kettle, then spend the day playing their loved one records.
When human wasps sting, the poison’s designed to last.

One Response to Wasp Honey