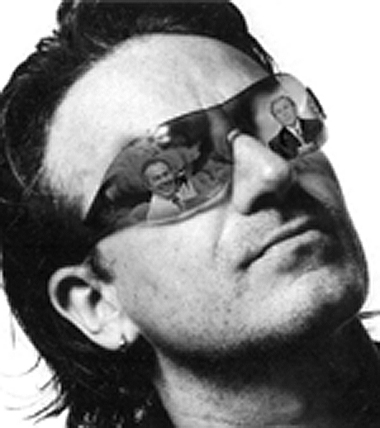 I just finished reading a book about Bono. Well, actually I just finished reviewing it. And I feel it’s my duty to recommend it to everyone. It’s called ‘The Frontman – Bono (In The Name Of Power)’ by Harry Browne and published by Verso. Here’s an edited version of the review – I chopped a big section out of the middle:

I’ve been waiting years for this book. It’s the stuff you instinctively knew about Bono – his increasingly desperate flirtations with power, his fundamentally conservative and religious motivation, his adherence to neo-liberal and essentially Republican capitalist economic strategies, his old-style crusader’s vision of Africa as another culture to be colonised, blimey even his slimy and unapologetic tax-dodging – all that stuff wrapped up in a grounded, inquisitive, even-handed bookful of research.

Bono isn’t just a smug self-deprecating grin and fancy sunglasses; he’s a clever, inspirational man who found himself, as the singer in a band, in a position of ridiculous power and influence. By adopting the messianic trappings of the rock ‘n’ roll frontman, in an age where it became possible to manipulate global media more than ever before, Bono was able to command a huge following that, frankly, politicians were desperate to poach.

Bono’s frequent pronouncements, those moralistic soundbites tossed to a tail-wagging media, are taken apart and examined, analysed and consequently derided as endorsements for a form of governance that enforces economic, political and military slavery. In Browne’s own words:

“Bono may not have realised it when he climbed aboard a largely admirable campaign against developing-world debt in the late 1990s, but his reputation for integrity and the love for his music felt by millions of people would become important weapons in the arsenal of those seeking to maintain and extend their influence, power and profit in a changing world. He fronted for the G8; he fronted for Tony Blair and Gordon Brown and George Bush; he fronted for Nike and Apple and Motorola; he fronted for Bill Clinton and Bill Gates.”

In the good old days, our rock ‘n’ roll heroes were anti-establishment; this book exposes how rock ‘n’ roll, in the hands of an Irishman with a mullet, became not only a champion of the establishment but its partner-in-crime.

Boff Whalley is a writer, singer, song-writer and lead guitarist with the band Chumbawamba