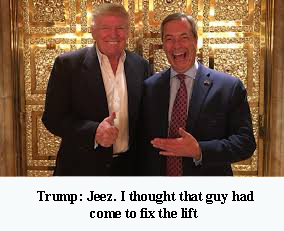 In a surprise development today, Donald Trump appointed head Brexiteer and ex-UKIP leader Nigel Farage as the new King of England. Mr Farage immediately accepted his new role as UK sovereign and ungraciously boasted whilst opening a veal abattoir in Wiltshire, “Personally, I’m not a bit surprised. Me and the Big Guy, or ‘Trumpasauras Tex‘ as I call him, see beady eyeball to beady eyeball on everything else. So to me, like all the other political events over the past six months, it makes perfect sense.”

When it was pointed out to the next US President that installing Mr Farage as liege of the British Isles was well-beyond his existing constitutional powers the billionaire property mogul simply stated, “I don’t have time for laws or rules or ideas or other people’s opinions or words or words written down on bits of paper or the truth or facts or gravity or time or even reality in general – I’m a guy in a hurry. A hurry to get things moving – forward – to heal the wounds of the past and bring peace to all humans across the universe and even those still living on Earth. I’m sure Mr Farage will do a great job just like the great job he did on the UK’s version of the Apprentice TV show.” When it was pointed out to Mr Trump that it was actually Alan Sugar who starred in the UK version of the hit TV show, and that Mr Farage was the gentlemen he had his picture taken with last Tuesday in his solid gold luxury apartment at Trump Towers (see picture above), he laughed, “Jeez. I thought that guy had come to fix the lift. All you Brits look the same to me. Especially the homosexual black ones and the woman. Never mind. I’m sure the lift guy will do a great job too.”

Mr Farage announced that, as the new King of England, along with some friends from his local pub, he would fix Buckingham Palace for a fraction of the current £160,000,000 asking price demanded, from the poor, by the existing sovereign Queen Elizabeth II, claiming that he had completed a four week plastering course at Swindon Polytechnic while waiting to become leader of UKIP and was already a keen DIY enthusiast ‘like all proper Brits should be.’ Other members of the UK establishment, including the present Royal Family, are known to be as enthusiastic about Mr Farage’s Kingship as they are about doing DIY themselves, and were last seen at Harrods buying dartboards with pictures of Mr Farage’s face printed on them as Christmas presents for each other. One Royal insider, Rear Admiral Sir Richard Shootthepoor Digsby, who coincidentally represents the company preparing to complete the renovations at Buckingham Palace, angrily hissed, “Currently Nigel Farage’s chances of becoming King of England look as slim as a naturally thin, bulimic Ethiopian stick insect on a diet wearing a clinging black cocktail dress and leaning against vertically striped wallpaper in a dark room full of hat stands and extremely fat people.”

View all posts by Ethan →
This entry was posted on 24 November, 2016 in homepage and tagged current affairs, Ethan Harrison, politics, satire. Bookmark the permalink.