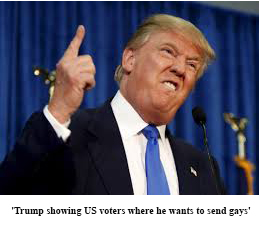 Donald Trump has turned up the heat in his fight to become the next republican presidential candidate by proposing to send all US gays to the moon. The billionaire businessman’s remarks come only days after he said that he thought all Muslims should be stopped from entering America and it is thought that these comments represent a new initiative by his team to appeal to traditional centre right US core voters.

Homosexual groups instantly called for tycoon to retract his remarks but it only seemed to make the maverick politician worse, and he promptly leaked a press release announcing that he was also considering sending all men and women who carried small dogs in their handbags to Mars after, of course, NASA technicians had accomplished the necessary leaps in technology.

Speaking from his soaring helicopter the straight-talking, rags-to-riches, true life, American dream explained the thinking behind his latest burst of opinions: “Americans want the truth and I want to give it to them. I’m no expert, to put it mildly, but obviously some Muslim terrorists might be gay so, in my view, now we’ve been to the moon once before in 1968 I think we can go again and send gays there. It’s the only way we can be truly safe. The space created could be used for more beefburger factories and golf courses which will be good for our economy. The more good something is the better it is. Am I wrong? No. Of course not. There will obviously have to be some exceptions to these rules. For instance gays in the movie and media business can stay on the earth, as we’d never be able to watch TV again. Right? Also my haircut would not have to go to the moon although it’s as bent as Liberace’s piano seat.”

View all posts by Ethan →
This entry was posted on 10 December, 2015 in homepage and tagged current affairs, Ethan Harrison, politics, satire, Social commentary. Bookmark the permalink.