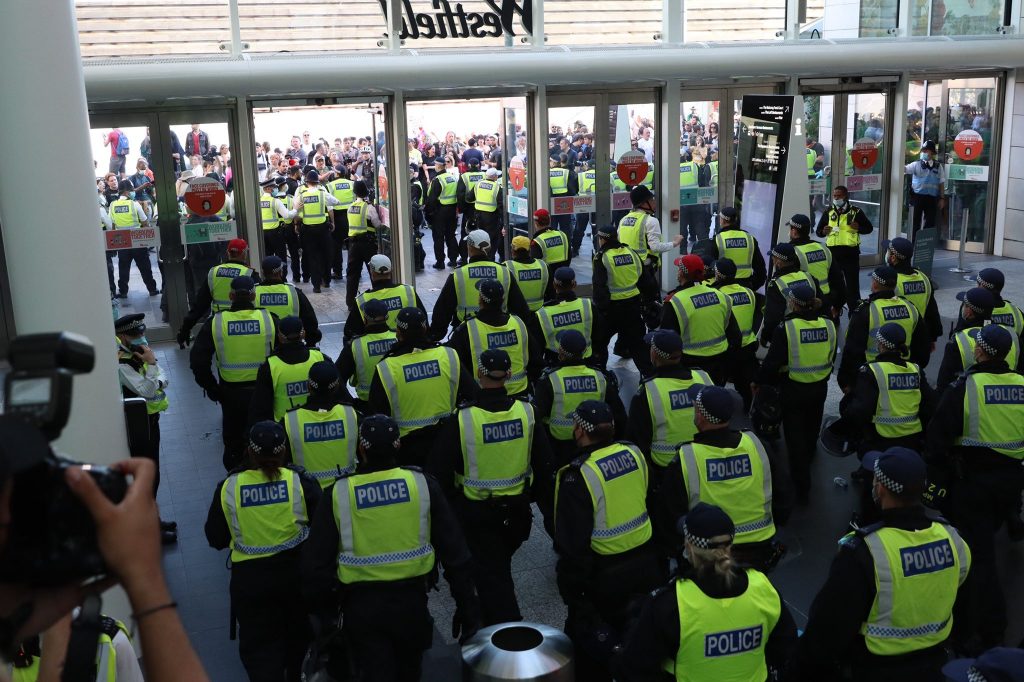 Every Saturday now, and in a reverse form of Shabbas
The Anti Israel marchers patrol the Palestinian path across town.
I am talking about London of course, where the jewish question
Nearly destroyed Corbyn’s labours and where those with
Or without faith each strive for saviours for whom
There could never again be a crown. As it is a time of divide,
Especially for those who are jewish who simply cannot believe
What has happened and is happening still as we walk,
From Marble Arch, Regent Street and on and into Westminster,
Which resembles a Pirate Ship stranded, as around and within
Vultures stalk. On the weekend just passed, another march
‘Monthed’ May’s ending, as Anti-Vaccers met the Anti-Israelis
Head on. How many sensibilities fused in this twin stampede
Along pavements? How many memories mused and mired
As these hard musics and elephantine encores soundtracked throng?
Never forget what’s been done and how and why its done to you.
This was the credo that always ran through belief. But there has been
So much disruption of late, so much disrepute, so much horror
That even this perfect sunshine has refracted back at us
And made of the mainstream media a sailboat or treasure
Yielding Yacht for a thief.  As Sunday’s Selfridges shoppers
Were speared by a two pronged assault, no news found them.
This empassioned clash of clear thinking and the call
For what’s right left them lost. As no cameras came from
The official stations and places. It was a cold, cruel decision
To remove beside shops virtue’s cost. This is how the right wing
Cover things; the swooping appeal of a shadow. Choose not
To notice or to pay opposition its heed and you thrive. And so
We washed our cars for no road and returned to the pub feeling
Grateful, while a chorus of change rang no changes, and where
Each clarion call echoed lies. Rather than some foreign field,
As journalised in past poems it was in fact Westfield that became
A battleground to show might. I was told that Police Horses appeared.
And with each horse there is ordure. As so called Civil Order
Was forcefully bound in blind light. For as the sun shone on all,
There was apparently nothing to see.  Nothing noted.
As the powers that be saw these protests as invisible stains,
One hand fights. And not worth the mention, of course.
It was the same when Pinochet came to London. He was
Dutifully invited by Thatcher and the horses in turn were
Released to dispense their crowd crit and thereby shit
On resistance. This form of review truly chills me. It is
The mindless State’s mindstate  squeezed. And reveals
How hot air defines and damns  in all senses. As in this
Early Summer we simmer and are brought to the boil
By Police. Not that they opened the packet, or box. Still,
This sort of censorship chills me. It is a simple choice,
And reduces, or, attempts to reduce truth’s defense.
The ruling crass would have been torn about who to trample first,
I imagine: those who attack the muddled and middle eastern
Disruption, or those whose own bloodstreams wish to remain
Nature’s friend. Its a fucking farrago my friends and it isn’t over.
Wherever we go, we’ll be covered and selected it seems,
Or crossed out. So, how much voice do you have? And what is
The current price on opinion? What does it mean to be civil,
As a war is raised just by walking and a silent mainstream
Continues to douse and drown every shout. Sadly, we live
And don’t learn. So call for schools to inform us. But in a time
Of Sats and statisitics Multiple choice bares no clout.
It is down to chance, all of it, like a broken lava lamp,
We’ve volcanoed. And now this strange fusion of freedom
And fear grants walks gout. And hollows out words
While making war out of worry.
But is this what they wanted, after all this time?
What’s that sound?
David Erdos June 1st 2021
.
Tweet

View all posts by David →
This entry was posted on 5 June, 2021 in homepage. Bookmark the permalink.