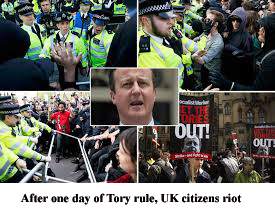 There were large riots outside No.10 and other government buildings after the Conservatives won last week’s general election. It is thought members of the 90% of the UK population that did not vote for them were responsible for the riot eager to show the mounting antipathy towards the Tories across the country.

A hooded young man who did not want to give his name hurled a Molotov cocktail and shouted through a scarf covering his face, ‘UKIP got 3.8 million votes and one seat in the House of Commons. The Tories got 11.2 million votes and 331 seats. The election result is wrong by 3310%. That bastard Cameron is always gobbing off about how he wants young people to get involved with politics. This is how we roll! Fuck the system!’

Lord Gordon Heinz Braithwaite, landowner, Conservative donor, Tory party activist, and close friend of David Cameron, George Osborne and Boris Johnson (and the 331 other Tory MP’s and their families) sneered from his Range Rover, ‘There’s nothing wrong with a voting system that has put us in power so many times. Now my business associates and I are sitting around the UK’s tax revenue waiting for Dave to dish it out to us like a bunch of slavering hyenas circling a gazelle’s rotting corpse. But its not all fun and games. These rioting vermin must be stopped at any cost. That is why we are passing new laws immediately banning demonstrations of any kind which includes absurd new internet ‘hate’ legislation.’

The Conservatives are also planning to ban strike action demanding that 40% of all available union members must vote to authenticate a ballot (30% more than the Tories got themselves in the election). It seems that in their efforts to stifle descent they will actually guarantee it.

A man passing by the riot said, ‘I used to think that it was a bit strong when Johnny Rotten said, ‘God save the Queen. It’s a fascist regime!’ But you have to admit after the fraudulent election shenanigans, the sickening double standards, these new laws on decent and the constant hypocrisy of this self-serving, inherently corrupt bunch of corporate wankers I think that old Johnny’s got a point. Now where’s that hooded young man? He can give me one of those Molotov cocktails so I can get involved in some real politics.’

View all posts by Ethan →
This entry was posted on 14 May, 2015 in homepage and tagged current affairs, Ethan Harrison, humour, satire, spoof news. Bookmark the permalink.