Ventriloquism: always be yourself, and other people too. 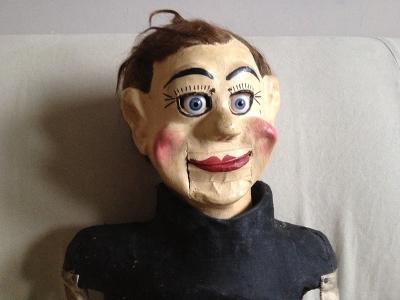 Say hello to my little friend. Recently I’ve been spending more time than usual with Sid the Sailor Boy, and I’ve been enjoying his company. He’s a smart lad. He can talk, he can laugh, and he can wink at you. Until his tubes perished, he was able to cry, and even to smoke a cigarette, when such things were still tolerated in public. Sid is a ventriloquist’s doll, crafted by hand in the 1950s by a stage professional. A doll, not a dummy. Sid, like all vent dolls, doesn’t like being called a dummy. It annoys him. If you persist in annoying him, you may wake up one night to find him and some of his friends at your bedside, and in the morning you’ll be unable to describe what’s happened to you.

I’ve always been fascinated by ventriloquists, especially those whose act expresses their dread that, like Victor Frankenstein, they’ve animated a monster who hates them. They’ve usurped the power of God, and they’re paying a terrible, hilarious price. Whether they’re engaging in a battle of wits with a stuffed monkey, or class warfare with a monocled toff, ventriloquism is transgressive, and dramatises the kind of internal conflict that we usually try to repress in polite society.

My relationship with Sid is strictly amateur, and on the rare occasions that I’ve held a conversation with him in public, my technique has been consistently lamentable. But you know what? It doesn’t matter. Because technique is not the point. And now I’ll let you into the secret at the heart of ventriloquism. It’s a confidence trick.

When I first began reading books about ventriloquism, I discovered something interesting. Invariably, the books devoted about three pages to physical technique, describing things like breath control, projection, and “head voice” versus “chest voice”. The rest was filler, with chapters on how to build a doll, how to write a routine, and so on. Meanwhile, I’m old enough to have witnessed some old school ventriloquists making the transition from the stages and clubs where they’d built their careers to the television screen. And I noticed something. The closeup shots on TV were merciless in exposing sloppy technique. With some of these vents, you could clearly see their lips moving. But it didn’t matter, if they had something else. Which is where psychology comes in, and the art of the confidence trick.

It’s all about conviction and belief. The deceptions perpetrated by con artists, scammers and grifters are very like those practised by ventriloquists. Both types of performer must convince their audience that something improbable is true. The con artist must persuade the marks they’re getting a bargain, and flatter them into believing they’re pretty damn fly, and smart enough to seize the opportunity they think they can see. The marks’ own vanity and greed, and thus their willingness to be duped, are vital. But the most important people for con artists to deceive are themselves. Only then can they project the absolute conviction in their own honesty that’s required to make it work. “Would I lie to you?” the scammer asks, and the best ones must believe, unshakeably, that they’re telling the truth.

It’s the same with smugglers. Talk to customs officers on the drug squad, and eventually they all admit the same thing: ultimately they rely on their instinct more than anything else. They stop and search someone because they just know something isn’t right about them. Yes, it might involve an unconsciously learned expertise in body language, or something similar. But there’s something else going on, too. The corollary here is that guilt or innocence is a belief projected by the potential suspect. Even if a smuggler is using the most primitive ruse, like a suitcase that’s been clumsily equipped with a false compartment, or a ludicrous prosthetic belly, their belief in their own innocence is what enables them to carry it off, and to sail through customs unmolested. The smuggler who believes they’re clever is far more vulnerable than the one who believes they’re innocent. The most sophisticated false-bottomed suitcase in the world is worthless without the absolute conviction that you won’t even be stopped in the first place – why should you be? You’re completely innocent! That’s the vibe that gets you through.

Likewise, a ventriloquist is expressing a profoundly held belief: that the doll is other. The doll is not me. Even if it’s just a sock with a couple of dots for eyes, this inert object on the end of my arm has a totally autonomous life of its own. Without that conviction, all the technique in the world is ineffective. Ventriloquism is a mind game. The vent must be as surprised, amused, horrified and embarrassed by the doll as the audience is: “What was that you said, you naughty little scamp!? You’ll get me into trouble!”

And at the same time the vent knows the doll IS them. This willed splitting of the personality can fracture the psyche, and everyone is familiar with the classic tropes about ventriloquists suffering psychotic breakdowns. We’ve all seen the films about evil dolls that are possessed, and sinister clowns, and malignant puppets. Some of us can even remember the daddy of them all, Dead of Night. However, as far as I can tell, I’ve managed to avoid the potential trauma of psychic fracture by accepting the simple truth that the fractures are already there, in all of us. As a Buddhist, I have no problem with the idea that the personality is an artificial construct, and the unified self is an illusion.

So, if you want to be a ventriloquist, first become a Buddhist. Or at least adopt a philosophy that enables you to take the reality of multiple selves in your stride. You know it makes sense (all of you), and increasingly the facts are on my side. As neuroscience and Buddhism draw closer, the consensus grows that you are not who you think you are. Or you are, but you’re also a lot of other people. Enjoy them, and play.

Tweet
This entry was posted on 23 May, 2020 in homepage and tagged Paul Bassett Davies. Bookmark the permalink.

One Response to Ventriloquism: always be yourself, and other people too.