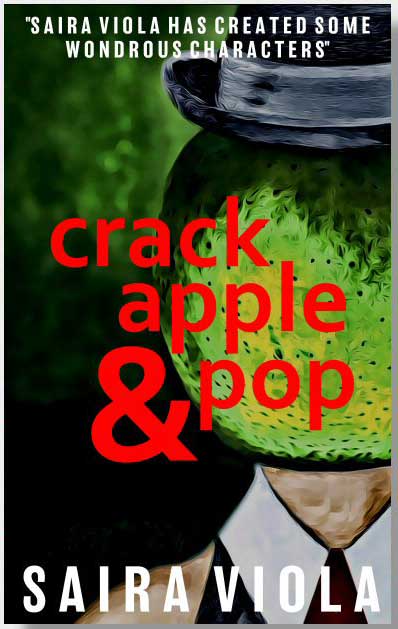 Saira Viola is the spark toting lovechild of New York New Wave Street Punk and Studio 54. If the Mongolian Cluster Fuck in her friend and mentor Heathcote Williams’ famous play, AC/DC had been bioiogically able to create one pint sized word dynamo then it would be her in a mix of hotpants, funky waistcoat and hippy like smock. In tune with the deep and resonant sound of the instrument in her name, her writing combines intense passages of depth and feeling, legitimising her command of trends from all ages, be it a  ‘dab of the good old in-out, and ultra violence’, or the jargon busting plosives of contemporary ‘blackspeak.’

The fiery combination of word, image, and the hip and happening inform every sentence and episode in her new novel CRACK APPLE AND POP published today (June 13th 2018). With frontis quotes from Mohammed Ali, John Dillinger and The Artful Dodger, where can you go wrong in this ride roaring ride through the drug markets of contemporary London, taking you as Dickens did, into an intense examination and engagement with a cast of characters the clear equal of any set down by that incessant word addict of an old century.

Telling the story of a how an aspiring black boxer, Tony T. fails to win through a never totally promising career, and is persuaded into drug running by a mysterious Rasta Crimelord, Don March, both protagonist and reader become subject to the new punches of challenge and sensation.

From the ‘gut wrenching screech of a siren and a swerve of brakes,’ to ‘six skinheads crocked on glue and gunning for hate’ the words fall like Dylan’s hard rain on this scatter shot ride through London’s shady districts, be they Herne Hill, The King’s Road, Soho,  or Putney.  This multi-racial cavalcade through the range of personalities from which the city is made makes this a necessary text and one both faithful to and independent of its hosting genre. Farenheit Press specialise in a new take on an old form and their list of titles reads like an exploitation fan’s wank fantasy, and this is all to the good if both reader and writer get to express the hidden or suppressed virulence of their own desires, the books easing both parties through the hands that hold them, instead of the other way round. Viola’s book (her other novel JUKEBOX is also available) stand out in a particular and unique way, as its slightly cutesy title is able to allude to and contain aspects and elements of the story in both a light and relevant way.

Recently adapted into a film, that starts in the boxing ring and ends somewhere between Paradise and the ninth circle of hell, author and novel introduce the reader to Tony’s predicament of reputation from the very off, primed by her pen’s starting gun. As each character crosses his path, be they his aghast Mother, following the skinhead attack. eventual boxing trainer Clayton, aforementioned Don march on the recommended felons and fields who become part of his grander network, Viola’s word music entrances at every step:

T came out slam- bam hot with a left right left turning his body to flex, jab and swing …He was bruising his way to a comfortable first round. Straight long punches, working a waltz: slide- dip and drag all the time; bob and weave, bob and weave..his footwork smoother than a Pink Floyd bassline and twice as chilled. Clayton at ringside was steaming guts and fire, chomping out positive vibes…

It is language as dazzle, weighted and working the room, while lending light to the darkest of days.

As initial physical failure leads towards a life of the mind as epitomised by a growing business opportunity and the rewards of a deal, Tony comes into contact with an easily corruptible if not already soiled London Lawyer, Richard Davey, soon to fall under the sway of a shady Indian Financier Poncho Khan. With two heroes as flawed as the current global political system the hard boiled noir of classics like Where the Sidewalk Ends meets the virulence of London’s very own Derek Raymond at his The Devil’s Home on Leave best, showing how genre can easily become the most effective form of social comment.

Tony quickly becomes a champion in this new arena as the suppositions of a presumably criminal life lead to areas of liberation for him and his companions, the pill filing Dwarf/Accounts man and 2nd in Command, Liccle B, or the coterie of Telly Tubby named scenesters who go about selling the goods. As the street stuff mixes with the shadow of Khan’s dodgy dealing, linked by Davey acting as go-between for all, the book moves like tides in a God-storm, wrecking an intemperate shore. Viola writes with more energy than anyone I can think of and as you read you feel or see her moving with you, pushing you past the expected confrontations and car chases, into a new way of breathing through words;

A serial womanizer and brilliant architect of self-induced misfortune and neglect, Scoot had spent the last twelve months of his life living like an overindulged South London Street pimp. He was searching for that elusive “something,” that hidden factor to life. He loathed his existence and felt as if the world owed him big time or at least the world owed him a house in St. John’s Wood, a modest flat in Puerto Banus and a Ducati 900.

One often wonders about the specific identity of the omniscient narrator in fiction throughout the ages, the third person wonderer who seems to skitter through story as a mix of Sigmund Freud and and a mosquito, buzzing away at the conscienceness and  actions of the characters on display. With Viola, its never an issue. One trusts her completely and for the first time, its her observations and ideas we hanker for.  As you read you imagine her poised beside you, a lazy arm draped round your shoulder as she sinks another rum and coke, or ice tainted bourbon and you aspire to spend the hot day with her. She is the story teller you’d like to be, the girl whose sought for company is what she chooses to write for you, setting down the pieces like spliffs in the gold framed ashtray, complete with its decorations of butterfly and viper.

As the book explains and explores each character who is inveigled into the central thrust of the story, you see the scope and skill of this extra special novelist. CA&P manages to cap something intrinsic about the form. It accomplishes expansiveness through its tidy page count and transmits heat as an object to be held or pocketed, singing at you all the time while never singeing itself. If crime capers are key to understanding human motivation then Saira Viola is the Jacob Bronowski of the uptempo pot boiler. She mainlines the mainstream and infuses the tepid water with cocaine tempered  bait. The river immediately flexes and gains a form of musculature, clouding before crystallising as she pumps through to the book’s end like David Bowman seeking his Star child ascent.  The book elevates, enterains and educates the lazy eyed consumer of the run of the mill hack laden exploits of world weary detectives and their clichéd assailants. It takes the people of Tottenham, Bethnal Green and Ludgate down beneath the concrete soul of the streets, to the muck laden heart whose blood filters through and into each room. Her work is graced with the groove that makes everyone their own earthquake, and as we crack, pop and apple, our next hearty breakfast is made from the flavoursome life that she gives. The Viola is playing, and there in a thick, almost meat like music are explosions and stars in the day. This is a bomb burst of a book; a Bollywood Noir primed by gun play. It is a sharp shout from London laced with the gold of LA. With Saira you’re sure that what you get will impress you. So sit back and allow her; all you need do is listen when Saira V. gets her say.