Waking up to Sheepism in The Year of The Sheep

Posted on 26 February, 2015 by Heidi Stephenson Humans are clever when it comes to concocting prejudices about other animals. Demonization, belittling and objectification are self-serving tools that help to cut off compassion and empathy, and to abolish any feelings of guilt. They give us ‘licence’ to do the unthinkable, the unspeakable.

From the “sheep-shaggers” who, in reality, rape lambs and ewes (and other poor animals) in the animal ‘brothels’ of Denmark, America, and Germany, on factory farms, and in the backstreets of Greece, Turkey, and the Middle East – tearing delicate orifices, battering internal organs, often to the point of death…(for more information, see the links below)…

To the callous “shearers” who steal the protective coats of others, cutting and ‘mulesing’ to the skin (if not, the bone,) leaving the bleeding and vulnerable without protection, often to die of agonizing exposure; (pre-slaughter mortality figures for sheep are 10-30 per cent for pre-weaned lambs, and 5-7 per cent for adult ewes, for example)…

To the “farmers” and “slaughtermen,” the killers who conspire to turn babies into ‘lamb-chops’ and kebabs, who painfully castrate, in readiness for the stew, casserole, köfte and ‘roast’…

To the so-called “religious” who act against the spirit of all that’s Divine, bloodily ‘sacrificing’ to what are no gods…The hardened heart relies on myth and slander.

According to the Food And Agriculture Organisation of The United Nations, 535,752,859 sheep are killed globally each year for their meat, and a further 217,067,252 for the horrific sheep milk industry (all those unwanted little boys, for example). In the UK we slaughter 14-15 million annually.

This figure does not even include the sheep who die in the world’s vivisection laboratories. In 2013, for example, 45,790 “scientific procedures” were conducted on sheep in UK laboratories alone.

Bits of sheep can be found in tennis rackets (strings made of sheep intestines), soap and candles, (tallow from their body fat), cosmetics and skincare products – so many of which still, unnecessarily, use the lanolin, found in sheep’s wool.

We mock ovine trust (and painful resignation) as ‘gullibility:’ “like a lamb led to the slaughter.”

We downplay their intelligence. Ill-thought-out ideas are “woolly” – and the obtuse human: “woolly-headed.”

To be “treated like sheep” is to be treated as if you don’t have a mind of your own. (And yet, interestingly, approximately 8 percent of male sheep show sexual preference for other male sheep, for example, seeking sex exclusively with males.)

To be “a sheep all your life” is to conform; to have no personal opinions.

But when we stand out from the crowd, we’re the “black sheep.”

We fail to comprehend individuality within ovine unity; that only a united flock can outwit a predator – and yet the mindless human follower – of guru, fashion, celebrity and politician, is described as “sheep-like.”

When we’re too timid, we’re denoted as “sheepish.”

But when we’re over-forceful, we’re “ramming” something home.

When we interrupt, we’re “butting” in.

When we complain, we’re accused of “bleating”.

When we’re insincere or flirting, we’re making “sheep’s eyes.” (Their large, rectangular pupils allow them to see almost 360 degrees, in fact, without turning their heads!)

And when we cling to our youth, we’re “mutton, dressed as lamb.”

Even when we steal from others, we’re “fleecing” someone.

Our exploitation is so entrenched that we can’t even sleep – without “counting sheep.” Hungry sheep on the Yorkshire Moors taught themselves to roll 8 feet (3 meters) across hoof-proof metal cattle grids to raid villagers’ valley gardens. According to a witness, “They lie down on their side or sometimes their back and just roll over and over the grids until they are clear. I’ve seen them doing it. It is quite clever, but they are a big nuisance to the villagers.” [Source: BBC News, July 2004]

New research is suggesting that sick sheep could actually be smart enough to cure themselves. Australian researchers believe that sick sheep may actually seek out plants that make them feel better. There has been previous evidence to suggest that animals can detect what nutrients they are deficient in and can develop knowledge about which foods are beneficial or toxic.

A study of sheep psychology has found man’s woolly friend can remember the faces of more than 50 other sheep for up to two years. They can even recognize a familiar human face. The hidden talents of sheep revealed by a study in the journal Nature suggest they may be nearly as good as people at distinguishing faces in a crowd.

Researchers say, “Sheep form individual friendships with one another, which may last for a few weeks. It’s possible they may think about a face even when it’s not there.” The researchers also found female sheep had a definite opinion about what made a ram’s face attractive.

According to researchers in Australia, sheep can learn and remember. Researchers have developed a complex maze test to measure intelligence and learning in sheep, similar to those used for rats and mice. Using the maze, researchers have concluded that sheep have excellent spatial memory and are able to learn and improve their performance. And they can retain this information for a six-week period.

The maze uses the strong flocking instinct of sheep to motivate them to find their way through. The time it initially takes an animal to rejoin its flock indicates smartness, while subsequent improvement in times over consecutive days of testing measures learning and memory.

Scientists at the University of Cambridge discovered that sheep have brain power to equal rodents, monkeys, and in some tests, humans. They discovered the sheep “intelligence” while researching neurodegeneration, with a focus on Huntington’s disease, an inherited disorder that leads to nerve damage and dementia.

The scientists put sheep through a set of challenges often given to humans suffering from Huntington’s. The sheep showed that they had advanced learning capabilities, as they were able to navigate the challenges in the same way as humans and primates.

A Daily Mail article elaborates on this:

“The scientists placed pairs of different coloured buckets in front of them; with one containing food each time. They them switched the food from bucket to bucket, while also alternating the colours and, eventually, changing the shapes of the buckets.

The sheep learnt to recognise different patterns in colours and changed their behaviour according to the pattern they were looking at. They also altered their behaviour based on the various shapes placed in front of them…Successfully completing the tasks relies on the prefrontal cortex, New Scientist reported.”

Sheep have been shown to display emotions, some of which can be studied by observing the position of their ears.

Like various other species including humans, sheep make different vocalisations to communicate different emotions. They also display and recognise emotion by facial expressions.

Sheep are precocial (highly independent from birth) and gregarious (they like to be in a group).

Female sheep (ewes) are very caring mothers and form deep bonds with their lambs that can recognise them by their call (bleat) when they wander too far away. 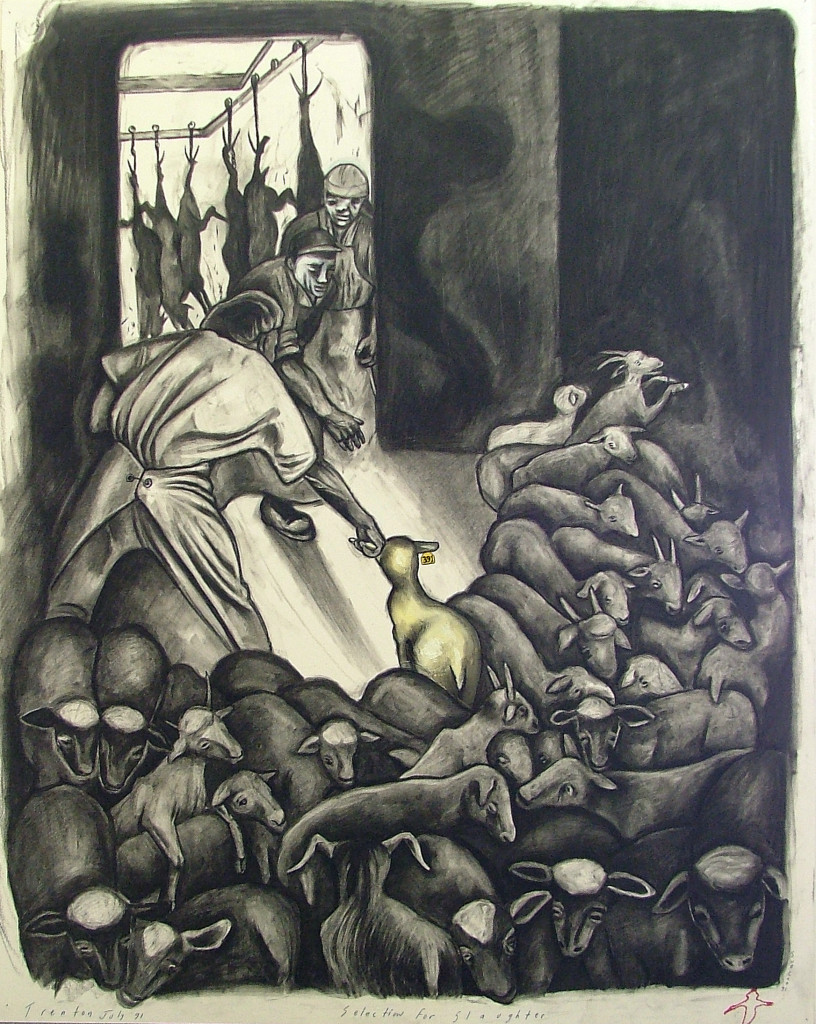 “A dead cow or sheep lying in a pasture is recognized as carrion. The same sort of a carcass dressed and hung up in a butcher’s stall passes as food.”John Harvey Kellogg

“The shepherd always tries to persuade the sheep that their interests and his own are the same.”Stendhal

“When I was a punk teenager, I rebelled because lots of people in Iceland think that foreigners are evil and that if you don’t wear woollen hats and eat sheep, you’re betraying your heritage.”Bjork

“Every year, about 10 billion farm animals go through America’s horrific factory farm system: cows, pigs, chickens, sheep, lamb. There, they are subjected to unimaginable and torturous confinement in vast factories where they never see the light of day. Agribusiness goes out of its way to make sure you don’t see the inside of those factory farms.” Jane Velez-Mitchell

In Chinese astrology, sheep represent righteousness, sincerity, gentleness and compassion. In the Year of The Sheep, perhaps we humans could emulate them, and learn to do the same?

With many thanks to Animal Aid http://www.animalaid.org.uk/ and Compassion In World Farming http://www.ciwf.org.uk/ for supplying the figures on sheep exploitation.

Just a few of the many links on animal rape: