For some inexplicable reason the mass exodus of lawyers seeking to get as far away as humanly possible from the Westminster Child Abuse Inquiry, [IICSA], is growing at an almost exponential rate. 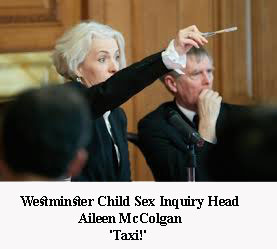 Aileen McColgan, Professor of Law at King’s College London and overseeing the investigation into child sex allegations in the Anglican and Catholic Church, is the latest high-level lawyer to resign from the strangely troubled case and was last seen two days ago running down Whitehall glancing apprehensively over her shoulder before jumping into a black cab shouting, “Heathrow now! And don’t spare the fucking horses!”

Along with Mrs McColgan, the other six other top-level barristers who have also inexplicably fled the IICSA including Hugh Davies QC deputy counsel who ran away in Dec 2015, Toby Fisher joint first counsel who legged it in August 2015, Ben Emmerson QC lead counsel who vamoosed as fast as a piece of warm shit flying off a cold, swinging shovel in September 2016, Dame Lowell Goddard heading the inquiry who sodded off back to her luxurious Knightsbridge apartment paid for at the tax-payers’ expense in 2014, not forgetting city lawyer and Lord Major of London Fiona Woolf, the second to peg it in 2013 and, last but not least, simply because there were doubtless others who went unreported, retired judge Butler Sloss who did not even sit down before bottling it in 2013, were all mysteriously unavailable for comment last night and hiding, for other inexplicable reasons, at various undisclosed locations. Two further lawyers at the inquiry are also rumoured to be currently squatting in their blocks and Bill Maloney, expert of shadowy pedophile cases involving powerful diplomats (see below), predicted, “They won’t be the last either.”

The BBC, keen to stop the spread of what they call ‘fake news‘ and opinions such as those of Mr Maloney (freely available @ Pie & Mash Films), commented, “Of course, like everything else the Beeb has ever researched, there is no way of ever knowing… anything… really,,, maybe… and the mysterious circumstances surrounding the reasons why so many of this country’s most trusted legal staff, and indeed those from other countries, have seen fit to up sticks and do one as fast as Phillip Green chasing after an old lady’s pension is baffling. One thing’s for sure, and I can say this categorically as I am a trained journalist working at the BBC; a real news outlet not like that fake conspiracy stuff on Facebook, there is no way these lawyers are so scared shitless that they will commit professional suicide, or probably be forced to commit their own, if they carry on with this case because they have seen, for themselves, the over-whelming, incontrovertible, depraved and damning evidence of a pedophile ring operating at the heart of UK government with connections to MI5 and MI6. No way.”

The judge’s departure leaves the IICSA in disarray, for she is the third … So I sent her a list of questions …