Where Have You Gone R. Cobb?

In 1968 the two most influential underground newspaper cartoonists in America were R. Crumb, who most everyone knows today, and R. Cobb, who sadly many do not. Crumb devastated establishment pieties while Cobb attacked the establishment’s devastation of rights and liberties. Both made an indelible impression on my impressionable generation.

Crumb, who lives in the south of France today, survived the Sixties to become a bone fide culture hero, with films, books, and exhibitions celebrating his creative madness. Cobb, who lives in Australia, left the ephemeral art of cartooning for a career as a concept designer and art director in television and films, including The Abyss, Aliens, True Lies, Total Recall, Rocketeer and many more. But for me, Cobb’s weekly single panel cartoon with its bold pen line and intricate cross-hatching featured in the Los Angeles Free Press has the most resonance. His blunt portrayals of scowling helmeted LA police branded this breed of law enforcer as robotic instruments of raw power years before the film Robocop while his bearded everymen, survivors of nuclear winter who find shelter amid the post-apocalypse rubble of LA, are cautionary comic beings that underscored a collective fear of the endgame.

Los Angeles native Ron Cobb (b. 1937) was the Vietnam War and civil rights-era’s Herblock (the editorial cartoonist for the Washington Post who courageously attacked McCarthyism and the Cold War). Herblock made the H-Bomb a specter of horror through depictions of a sneering, menacing bomb with a five-o’clock shadow. Likewise, Cobb underscored America’s growing environmental crisis through a repertory of dazed lost souls, like the one holding the plug of a broken portable television, aimlessly looking for an electrical outlet against the backdrop of total environmental annihilation. He also designed the widely used Ecology symbol made from the lower-case letter e combined with an o (e for environment and o for organism), which he explains in analytic detail in an October 25, 1969 cartoon.

A detailed description of the ecology symbol, 1969

Cobb, a former inker for the Disney Studios and later a US Army signal corps artist in Vietnam, emerged into the underground in 1965 when he started contributing cartoons to Art Kunkin’s Los Angeles Free Press (Freep) that were quickly picked up by the Underground Press Syndicate (UPS) and distributed free to other undergrounds (including a couple I worked on). The cartoons, reminiscent of MAD’s Will Elder, were not funny in the goofy sense, although some of his characterizations were comically exaggerated in the prevailing style, but decidedly serious in tone and texture. Still, they were nothing like Jules Feiffer’s shorthand renderings or Robert Osborn’s expressionist visuals. They did, however, elicit uneasy laughter from the viewer. His 1968 cartoon addressing postwar real estate development shows a sign in a forest of ancient trees that reads: “Soon to be erected on this site. Sequoia Square. Shopping Center and 300 Unite Hotel-Motel Complex.” In light of all the forests and parks that have succumb to speculation this was a prescient warning. A jarringly poignant issue that conflates race relations and the environment shows an Apollo 58 landing craft on the moon with two black men in space suits cleaning up all the debris left by the previous 57 missions. And a detailed rendering of man-made waste along a highway reveals rows of billboards showing bucolic scenes with a sign that reads: “Scenic Drive Next 2 Miles.”

I still have his album cover for the Jefferson Airplane’s “After Bathing at Baxter’s” and recently rediscovered two of his three books (published in 1971 by Price/Stern/Sloan) Raw Sewage, cartoons about the environment and My Fellow Americans, “patriotic cartoons,” which serve as jaundiced but nonetheless precise histories of the late sixties and early seventies political and social angst and attitudes. While the book cover lettering suggests the period when they were published (and the musty smell of decaying pages is palpable), the images have not lost their potency. In “Progress” two cave men in one panel are threateningly brandishing bones at each other, while in the second, a man in a suit shoots another through the heart with a gun. In another cartoon, a working GI Joe-like replica of a “Leatherneck” which the toy box says “Puts you in the Action” walks away with a bloody bayonet after stabbing the little boy who was playing with it. And in a futuristic vision of the law and order state, two men on a bench marked “for B Citizens Only” under the watchful eyes of both surveillance camera and police officer in a tank are talking: “Well, at least we don’t have to worry about anarchy anymore. . .,” says one to the other.

Crumb’s comics were brilliant comedies, but Cobb’s cartoons brilliantly distilled issues into icons, and served as rallying points for those engaged who questioned government and its leaders. They were right for the times, but when the epoch came to an end, when the LA Freep closed down in the early 1970s, Cobb’s cartoons ended too.

“Well, at least we don’t have to worry about anarchy anymore,” 1968

“Soon to be erected on this site. Sequoia Square. Shopping Center and 300 Unite Hotel-Motel Complex,” 1968 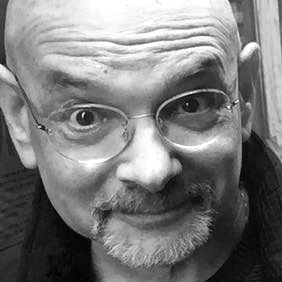 Steven Heller is the co-chair (with Lita Talarico) of the School of Visual Arts MFA Design / Designer as Author + Entrepreneur program and the SVA Masters Workshop in Rome. He writes the Visuals column for the New York Times Book Review, a weekly column for The Atlantic online and The Daily Heller.

Commencement Redux
On the off-chance that a college or university might invite me to take part in their graduation festivities, each spring I write a commencement speech.

Watch Out What You Day-Dream For
“I used to day dream a lot about inventing things that were never realized, like an interactive television where you could stick your hand through the top of the set and move the characters around or remove them at will.”

To Free or Not to Free
Are there limits to free speech?

https://designobserver.com
Tweet
This entry was posted on 1 June, 2019 in homepage. Bookmark the permalink.