A detailed primer. (chock full of spoilers, in case you care)

So I was sitting around playing Marry/Fuck/Kill with the Potterverse and was like “I’d totally fuck Snape, obviously.” Then it occurred to me that, among the smorgasbord of cute young boys, why would the “obvious” sexual choice be a gnarly old goth who’s a dick to everyone? 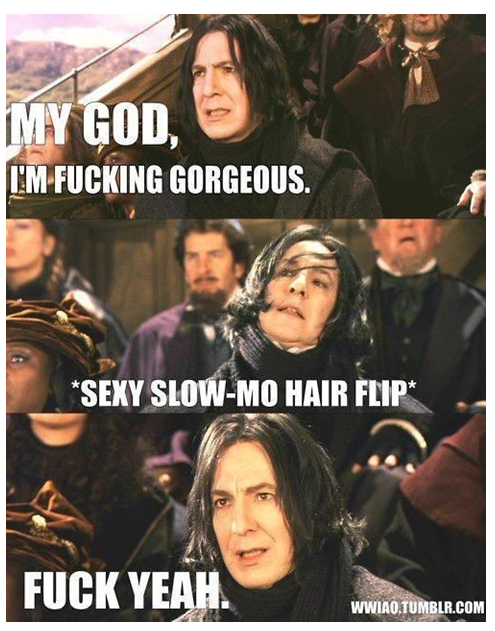 Initially, it doesn’t seem to make much sense, since, in the novels, even though he’s a fairly complex character, there’s not really a drop of sex on him and he’s mostly described as being mean and ugly. In spite of this, HP fandom is bursting at the seams with ladies who are hot and bothered for Snape. Some fervently embrace it, others feel strangely confused about it, but it is nonetheless true that ladies love cool Snape, and– fear not– I’m going to tell you why in a convenient 5 point format: 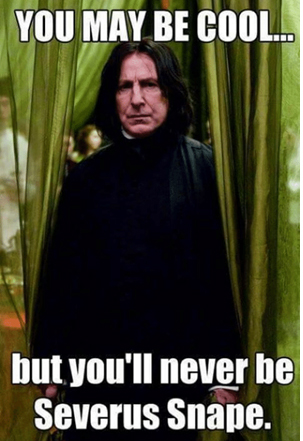 Guys don’t get it (which I hypothesize is why he tends to be cast as a villain in guy movies and a romantic object in chick movies). It would seem you have to have a vagina in order to experience the aphrodisiac qualities of Alan Rickman’s voice. It’s almost a rite of passage into womanhood: You get your period, you have your first kiss, and you have the first time you go see a movie with Alan Rickman in it and leave feeling all funny, thinking “wow, that guy is such a… um… good actor.” because Alan Rickman’s voice just totally made sweet dirty love to your ear holes.

So now, thanks to the Harry Potter movie franchise, there is a whole new generation of adolescent girls who hear things like this and then feel all strange and confused about their inappropriate longing to make out with a guy practically old enough to be their grandfather. Fear not, young ladies: You can’t help it. It’s just science. 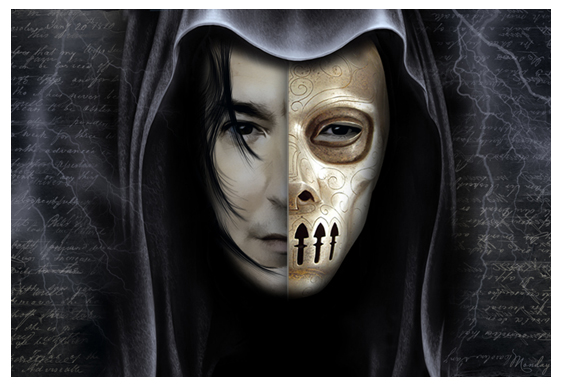 So let’s look at Snape: Is he dark? Yes. Along with the severe black outfit, he’s got a titillating air of menace and danger. Mysterious? Definitely. Is he a good guy? Is he a bad guy? Where do his loyalties lie? Does anyone really know what he’s up to? So many questions! How desperately we ladies want to uncover his secrets! The “scary and confusing” factor, aside from being exciting, can also totally disrupt a ladies sense of control over a situation, which can also be stimulating if attraction is involved (which it obviously is because, duh, Alan Rickman’s voice). Leading us to…

3. The whole S&M vibe
It is not a mere coincidence that the interwebs contain about ten million smutty fanfics about what transpires when Snape keeps students after class for detention. Consult a list of the top ten female sex fantasies and you will see “being dominated” and “teacher/student” sitting right next to each other. The character of Severus Snape is a teacher… A very strict teacher. When he tells you to do something, you do it. These kind of power/control fantasies are pretty common (and hot). Add “dark and mysterious” and the wanton suggestiveness of Alan Rickman’s voice into the mix and you’ve just created a perfect storm of female masturbation material. Under these circumstances, having Snape say lines like “I shall attempt to penetrate your mind and you shall attempt to resist me” is almost too much to deal with. 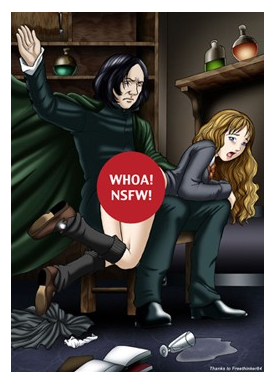 One thing to establish is that most women don’t like jerks because they want to be treated badly. Rather, they want the guy who’s a jerk to everyone but them. They’re hoping for the victory of biting through his hard candy shell and getting to his sweet tootsie roll center. Jerks possess the alluring qualities of power and confidence… although usually taken to a dysfunctional level. Since most of us have to be nice most of the time, the jerk can also provide a vicarious, liberating thrill as he brazenly breaks all the rules of social propriety. 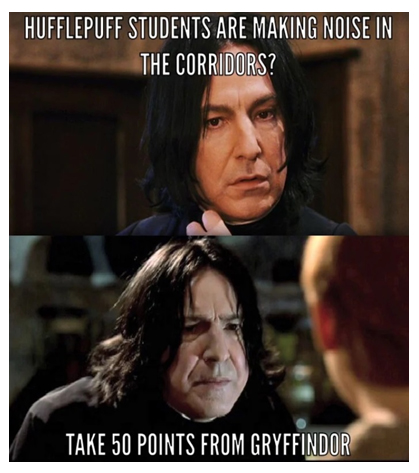 So when Snape goes around being an asshole and not taking anyone’s shit, it’s actually kind of a turn-on. (Some women also labor under delusions that they can “reform” the jerk, although this is usually a recipe for disaster.)

If I may, however, give some advice to the youth of America, it’s this: Don’t have relationships with jerks. I’m not saying you can’t have hot flings with the occasional jerk in your experimental youth, because, truthfully, they ARE pretty exciting in the short term, but any guy who’s a jerk to everyone else will eventually be a jerk to you. Trust me. To put it in HP terms: fuck all the Slytherins you want, but if you want to get serious, find a nice Hufflepuff. 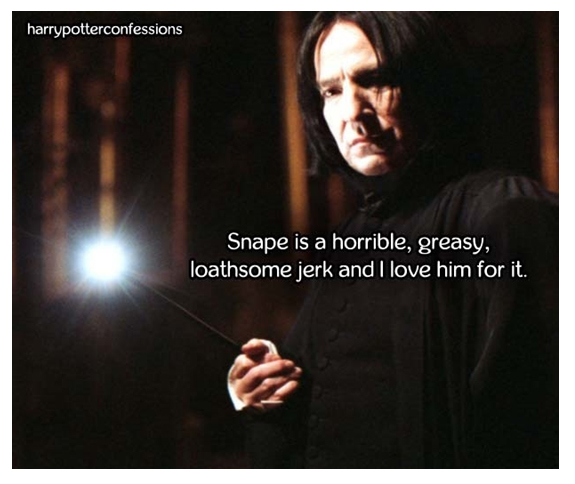 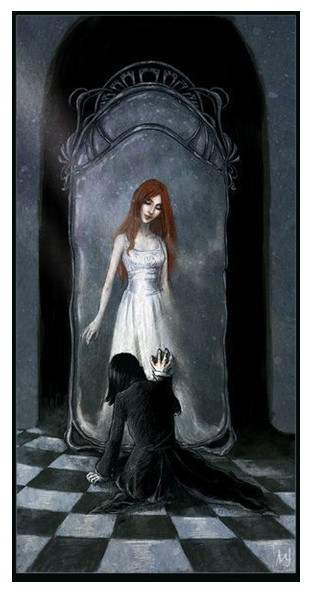 Remember what I said in the last bit about the tootsie roll center? Well Snape’s is a doozy. He came from an abusive, neglectful home, got bullied in school and then watched as his BFF/love of his life kicked him to the curb and married the guy who bullied him. Now she’s dead and he feels responsible, so he’s sworn to save her son’s ass from Voldemort even though he partly hates him because he looks like the dude who pantsed him in high school. Meanwhile, everyone just thinks he’s a dick because of the cold, stoic façade he’s constructed to hide his inner turmoil. But he’s secretly doing good…GOOD, DAMN IT! So much heartache! So much angst! So much wounded inner child desperately needing the right woman to hug his pain away! 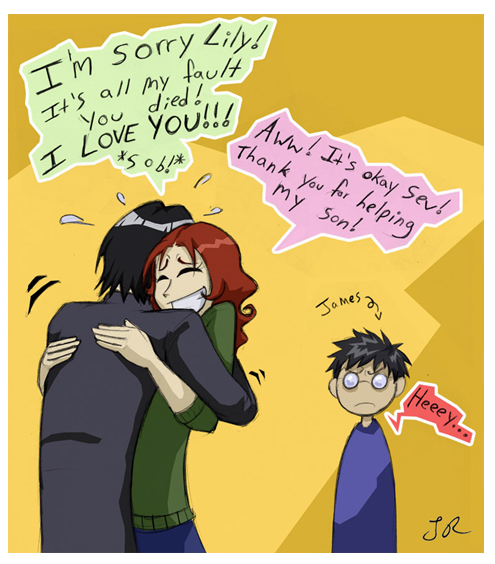 Chicks often dig romantic fantasies of being the special, insightful one to understand the misunderstood guy, thus breaking through his misanthropic exterior and being rewarded with all of his ardent, pent-up passion. Combined with the Jerk factor, this would seem to present a situation where you could have your hot, rough, pinned-against-the-wall sex and your sweet butterfly kisses, too. In real life, this typically doesn’t result in anything but a dysfunctional relationship, but it seems pretty sexy on paper.

And so I hope that this sheds some light on why I would obviously fuck him… although I’m totally marrying Hagrid…and killing Peter Pettigrew. That guy is worthless.

All images used were culled from the internet.

link to the original text:

Tweet
This entry was posted on 9 November, 2019 in homepage and tagged A.V. Phibes. Bookmark the permalink.