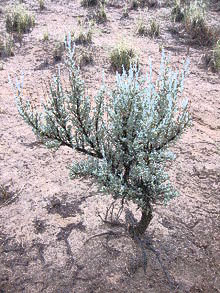 Just outside the gates wild sage is growing so I hunker down, pluck a few sprigs and twist them into a wreath. The place is deserted. I barely glance at the monument as I walk through. Not yet. I get to the far end of the graveyard. On the other side of the fence there’s a small wooden church. I wonder for a minute if that’s where they treated the wounded but then realise, no, that was at Pine Ridge, four miles back. I turn and look down the hill to where the RV’s parked, past the green metal billboard telling the victor’s version of in the confusion what happened then look across to the ditch where the soldiers (7th. Cavalry, Custer’s lot) found the women and children cowering – that night it snowed so their bodies got covered.
Another camper pulls up at the bottom of the slope and a man and woman get out. She’s carrying things and as they get closer, I realise her arms are full of soft toys, mainly animals.
As they walk through the gates, I turn away and light a cigarette. When I look back the woman’s standing on her own, eyes closed while he’s down on one knee taking photographs.
I decide to take a walk round and read some inscriptions. I’m anxious for them to go. Five minutes pass and they’re still there when suddenly she drops all the toys and stands there rocking on her heels.
The guy glances at me then goes over to her, says something quiet. She hesitates then slowly nods her head. He helps her pick them up and then they both head back to the gate.
Now feels right. There’s a low wire fence all-round the monument and I walk past it until I come to the gate. I’m aware they’re watching me but pretend not to notice. All round the monument’s base there’s offerings: sweetgrass, corn, a winnowing basket, cans of beef, ribbons coloured for the four directions. I kneel and put the sage down.
As I get a turtle fetish (bought at Pipestone) out of my pocket a shadow falls across me. I glance up. It’s the woman. She doesn’t say anything. She’s carrying a toy, a white seal. She nods to me then leans down and puts it next to the fence but a gust of wind blows it sideways. She rights it but the same thing happens again.
Her hands are shaking and I can see she’s close to tears. A thought occurs.
There’s a thread of buckskin holding a pipestone arrowhead round my neck. I take it off – what right have I got to wear this anyway? – and use it to tie her seal to the fence. She watches me and when I’m done, I hold out the turtle. She hesitates then takes it, turns away and walks back to where the guy’s standing.
They go down the hill to where their RV’s parked, get in and drive away.
I hear that high whistle and look up to see an eagle circling.
I hope he’s telling me I’ve done the right thing.

Tweet
This entry was posted on 17 July, 2021 in homepage and tagged Kevin Patrick McCann. Bookmark the permalink.