A Great One Died Today

‘He was the Shelley of his age and more.’ — Gerard Bellaart 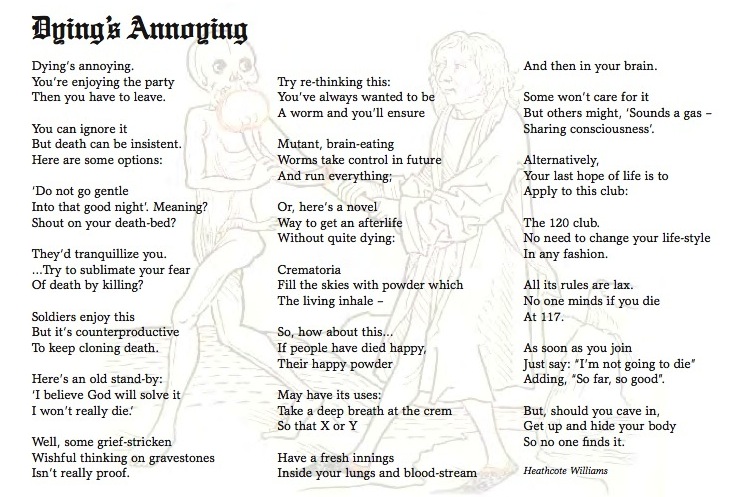 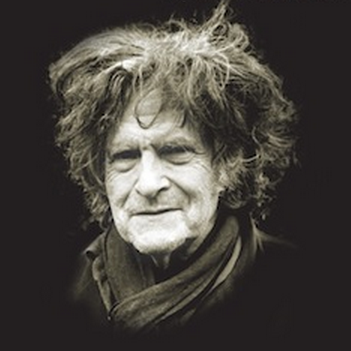 July 17 — Malcolm Ritchie, whose friendship with Heathcote spanned decades, attended the service. This is his description:

I stayed overnight in London with John Lahr, an old writer friend, and we both went together to the funeral. First, everyone convened at H’s old house (an artisan’s cottage in St. Bernard’s Road, Jericho). It was strange being there with so many people, and the house cleaned up as well! We overflowed into the garden which had also had a severe lopping of shrubbery, and it was there that I suddenly broke into tears.

H’s coffin of woven willow lay on a table to one side of the sitting room. The top was covered in paper hearts, and we were invited to write a message on an old-fashioned type of luggage label which we could then attach to the side of the basket-coffin. After about an hour we were invited to line up outside behind the coffin, which was then hoisted onto the shoulders of fit young men, and we proceeded to process around the weaving streets of Jericho, led by a large base drum which maintained a mournful beat. The traffic was held up in a few places and people came out from cafes and restaurants to watch us pass; some, their jaws maintaining a silent prayerful-looking mastication. Women ran back and forth kissing and hugging each other. There was a beautiful feminine energy flowing through the procession. It all reminded me of the way in which the local kami or god of a village or small town in Japan is ritually carried around the streets of the neighbourhood on a bier, in order to maintain the bond between itself and the parish.

After quite a long journey, the Italianate campanile of St. Barnabas Church came into view, and its single tolling bell conjoined with the drumbeat as though beating for the great heart which had now ceased.

Entering the cavernous space of the main body of the church was like entering the body of a whale, and we were greeted by the disembodied voice of Heathcote reading from Whale Nation which descended among us from the lofty painted vault of its vast roof space. Prayers and hymns were offered, including a hymn which H had written especially for the church only just recently. Gray Gowrie gave a very moving reminiscence of his very long friendship with H (they were at Eton together), and a wonderful appraisal of his work. I didn’t recognise him at first, he looked so gaunt, and moved crablike on two sticks. And either by permission of my modesty, or a licence to my vanity, I have to tell, there was a reference to a piece of writing of mine called “The Realm of Hungry Ghost,” which was referred to by one of the eulogists who lived nearby and visited H regularly, and possessed the same gift of oratory as any of the speakers in H’s brilliant book, The Speakers.

However, even at the event and hour of its confirmation, I still couldn’t grasp the fact of H’s having gone. When I last visited him, I asked him not to leave the planet before me. He obviously didn’t hear me. The acceptance will come slow as the silences and gaps in the inbox of my laptop reveal just that; the absence. No more, “Here’s something…”, “Take a look at…”, “See what you think of this…”, “I’ve been…”

The interesting thing for me was the realisation that while my friendship with H was always intimate and personal, that others too had similar relationships. And that slowly as speakers spoke about his work, H began to separate somewhat from my personal, historical space, and appear in a vast cultural landscape and as a native of that place.

I had written a piece for The Guardian which they said they couldn’t publish in its present form as it was “too personal” and that others “would want to write likewise”. I was angry about it, and explained that it was about a beloved friend, and that I didn’t want it published if they were going to cut it. However, someone phoned me to say that they had published it, in a meaningless and truncated form of two paras!

I raise a glass with you to our old friend, my friend,

Postscript: My staff of thousands tells me that even digital-savvy viewers may not click links they can mouse over but don’t easily see — the link embedded in the photo above, for instance, which would take them to a list of Straight Up blogposts by or about Heathcote that have appeared in recent years. So here’s the link made visible.

Heathcote was an unstoppable force. Characteristically, in an interview with The Guardian in May of 2016, when his play “The Local Stigmatic” was getting a London revival, Heathcote remarked: “Am I pleased it’s getting redone? I’m thinking more about what I want to do next.” He was always thinking about that. And doing it. Even in death he is unstoppable. His writings, his activism, and his personal example will continue to inspire others. Have a look:

He invented an idiosyncratic ‘documentary/investigative poetry’ style … bringing a diverse range of environmental and political matters to public attention.

Boris Johnson: the man with no moral compass who became UK foreign minister. 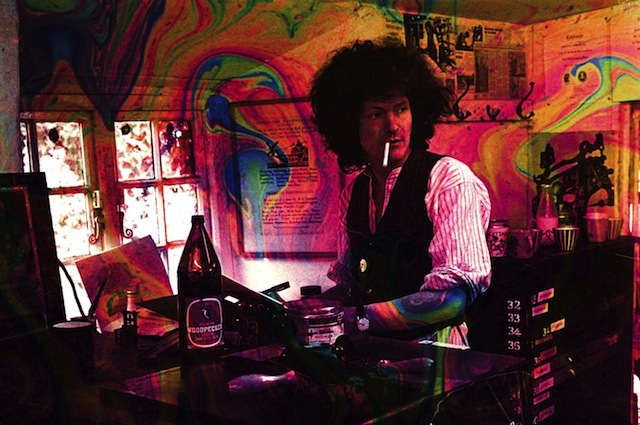 PPS: July 2 — From The Guardian obituary by Luke Harding:

At heart, Williams was a revolutionary. The historian Peter Whitfield placed his work in a “great tradition of visionary dissent” stretching from William Blake and John Ruskin to DH Lawrence and David Jones. His poems – blasting the arms trade, consumerism and the tabloids – were “wonderfully innocent” and at the same time “wonderfully streetwise”.

And another obituary by Michael Coveney, also in The Guardian, describes him as “a unique and brilliant writer — poet, dramatist, visionary and pamphleteer.”

He restored and renovated a sense of intellectual anarchy in our public discourse in the great traditions of Jonathan Swift, William Blake and Percy Bysshe Shelley, all of whom were among his heroes. […] The quality of anger is usually strained, but Williams’s muse was fuelled by a witty and beautiful anger that he channelled in three great poems at the end of the 1980s: Whale Nation, a wonderful hymn to the largest of all the mammals and a plea for their protection, Sacred Elephant, and Autogeddon, a JG Ballard-style ballad about the plague of the motor car; all three were filmed by the BBC, the third performed by Jeremy Irons.

Williams himself made notable recordings — in his day, he was a charismatic troubadour –of Buddhist scripture, Dante and the Bible, and a collection of shorter poems, Zanzibar Cats (2011), which skewered political absurdity, planetary destruction and social justice mishaps with delightful glee and great verbal dexterity.

Tweet
This entry was posted on 3 July, 2017 in homepage. Bookmark the permalink.

4 Responses to A Great One Died Today