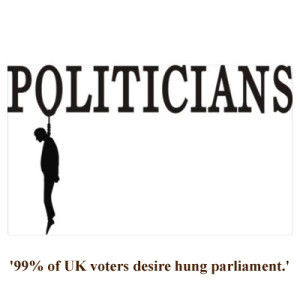 In the latest MORAY poll 99% of UK voters expressed a desire for a hung parliament after the general election with 100% of those questioned in the survey clamoring, ‘String the bastards up!’ It is thought that mass lying on behalf of moribund MPs combined with an ear-bruising, mind-mangling month long campaign have led to what pundits are calling GEF (General Election Fatigue) which in turn has produced the unsurprising poll results.

Micheal Butterwings, Liberal Democrat election coordinator, wept into his iced, double frappe cappuccino sprinkled with chocolate and cinnamon, ‘Everything was going so well five years ago before the public found out that we were exactly the same as the rest of the lying bastards mincing about Westminster. Now they want to hang us. Well that’s just great. Nobody told me politics was a cut throat business. I knew I should have stayed at the Car Phone Warehouse. When I used to fuck things up there and people shouted at me I could just run off into the back room and have a cry.’

Keith Bannanarod, Labour national campaign chief strategist and central policy adviser, belched, ‘You couldn’t lend me your phone could you? I haven’t got any signal and I’m running out of battery. I left my charger at Spearmint Rhinos last night and I’ve got to ring Ed in a minute and tell him what to say on Newsnight or is it Devizes Rotary Club? Anyway who’s this General Defection League? Never heard of them. Did I mention I needed a phone?’

Gregory Horatio Churchill Smedley Blythe, Tory tactical consultant and head liar, sniggered from behind the descending electric window of his Lamborghini, ‘The plebs will get what we want and like it. With 60 % of all politicians coming from either Oxford or Cambridge the oiks are unaware that they are actually watching a whopping great boat race with me on the side of the winning pale blues. Hoorah!’

Dorothy Pauper, a debt-ridden PHD psychology student working as a toast stacker at a Harvester in Kent, sighed, ‘If I vote UKIP then apparently Labour get in. If I vote Labour the Conservatives will win and if I vote Green the SNP will form a coalition with the Irish Unionists and the Monster Raving Looney Party. And whoever I vote for I will get the same fish-lipped, pathological liar, ex-pet insurance salesman or woman whose determined to go back on everything they promised and sell me up the swanny for a fiver and to protect the job that I got them in the first place. It’s bollocks. Well if we’re going to have a hung parliament then let’s do it properly. They can use some of their extravagant wages to buy enough rope for us to finish the job. Now that’s what I call representative government.’

View all posts by Ethan →
This entry was posted on 1 May, 2015 in homepage and tagged current affairs, Ethan Harrison, politics, satire, Social commentary, spoof news. Bookmark the permalink.