A blissed out, fuzzy replica 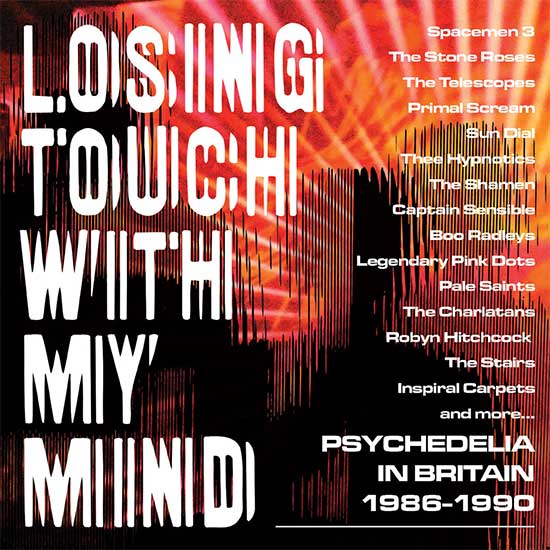 Sixty tracks – ‘ sixty of the finest scene hits, lesser known deep cuts, obscurities and underexposed nuggets’ says the press release – spread across three CDs, with enough organ and guitar effects to blow your mind several times over. Or, if you’re cynical, enough bandwagon jumping to have you hanging your head in your hands in despair. Even several listens in I can’t decide what to make of this gathering of style over substance.

I never ‘got’ and still don’t get The Stone Roses or Inspiral Carpets. I much preferred The Charlatans, who are also here. Ultra-Vivid Scene are here too, an 80s version of the Velvet Underground without the heroin, John Cale or Lou Reed (not much left, you might think, but it’s good stuff). The quirky genius of Robyn Hitchcock is here, along with the often overlooked Cleaners from Venus, but are they psychedelic, or more akin to the English strain of whimsy that spawned the Bonzo Dog Doo Dah Band?

Actually, that’s a real question. Is psychedelia a drug-induced state-of-mind (this time with ecstasy replacing or supplementing LSD) or a musical style? In his book Psychedelia and Other Colours, Rob Chapman limits the term to a very specific time frame and group of musicians, who all took or pretended to take, acid. His English version of the music (he also deals with the American version) draws on folk memory and the post-war everyday as much as any musical genre or style. I wonder what he’d make of this box set?

So, at the time, a lot of this music was simply regarded as ‘indie-rock’. Spaceman 3 – for me Loop’s poor relation – were into wigout guitars, as were Gaye Bykers On Acid, whose name was the best thing about them. The Seer’s ‘Psych Out’ was a one-off attempt to cash in on dance – the album it might have led you to (it did me) was bad rock, the track a one-off aberration. The Pale Saints, The Prisoners, One Thousand Violins, Wolfhounds and Boo Radleys had all been around for what seemed like forever; and the Legendary Pink Dots had been around forever with their annoying warblings and ‘experimentation’.

Quoting the press release again, we get ‘a blissed out, fuzzy replica of the late 1960s, re-imagined by a generation with little else to play for’, which strikes me as somewhat revisionist. But then I was into ‘the angular post-punk’ which apparently was replaced by ‘a gentler, weirder direction, fusing jangly guitars and bowl haircuts, paisley heavy wardrobes and the remnants of the glam, goth and garage revival scenes with a new positivity and enlightenment offered by the ecstasy and LSD’. Really?

It also apparently opens the way for a musical nirvana, where ‘the “shoegaze” movement to “Madchester”, the Mods to the out and out revivalists and beyond, […] collide[d] in wonderful harmony’. This is, of course, a curatorial conceit, not anything that happened at the time. It’s proposed and written about in hindsight to facilitate a critical point-of-view and this new box set.

And actually, as a curatorial device it works well, with a wide-ranging and open-minded mix of music carefully sequenced, accompanied by detailed notes collected in a groovy booklet. Nobody outstays their welcome: the sitars, drones, phased guitars and strangely-out-of-tune vocals come and go, echoing in the mind and slowly fading into the distance. It’s not a patch on the original stuff they’re imitating here, but it’s an interesting take on the 80s, even for those like me who lived through it first time round.

View all posts by Rupert →
This entry was posted on 16 March, 2019 in homepage and tagged Losing Touch With My Mind: Psychedelia in Britain 1986-1990, Rupert Loydell. Bookmark the permalink.