A Day To Remember 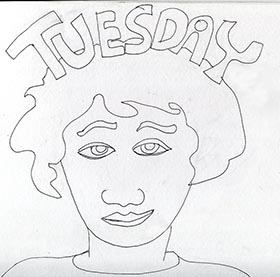 A day to remember

‘The names which denote things correspond invariably to an intellectual notion, alien to our true impressions, and compelling us to eliminate from them everything that is not in keeping with itself.’
Marcel Proust

Smith, a sub-borderline nutter, is on his way to the library and while walking along begins to wonder what day it is, and soon discovers that he hasn’t a clue.

‘If I could remember what yesterday was then the rest should be easy,’ he thinks, but he cannot. Now the day is bereft of that comforting and reassuring cloak – the Hallowed Name, without which it is indistinguishable from any other.

‘They’re all exactly the same,’ he thinks on, ‘and the name, like an important uniform, gives a distinct character and makes each unique amongst it closest neighbours. For instance: the Wednesdayness of one has none of the sharpness of the following, or the dreary clunk of the previous.

‘I don’t think I’ll bother with them anymore,’ he thinks, rather enjoying the sense of mystery with which their absence has endowed the day. It appears before him, an anonymous presence, at front, back and rear; he is right inside it, and he realises that the name alone, like a dark shroud, had been excluding him from this intimate relationship.

The newly naked day wraps its unknown self around him in its bright energising folds – no pompous name to impose a deathly pall and murder its innocence. Free of all these ancestral interpretations the air seems cleaner, the colours more vivid and for the first time in years he begins to whistle and feels his steps getting progressively lighter (but avoids the urge to skip on the crowded pavements.)

He looks around at the other walkers as they seriously engage in their day-to-day activities – shopping for plastic rubbish, or hurrying to work for as much money as they can get, and one thing or another.

‘I bet they all know what day it is,’ he thinks, and then realises that they are all, therefore, trapped inside whatever day they think it is. He feels somewhat sorry for them, desperately surviving through perhaps a grim and leaden Monday, to be washed up exhausted onto the shores of whichever day comes next.

‘I could ask someone what day it is,’ he thinks, but he avoids this too since by now, revelling in the euphoria of his ignorance; he really doesn’t want to know.

However, he has strayed too far in this indulgent musing, for a new and menacing thought is hovering in his mental background and making its gloomy presence felt. As yet he has no idea what the thought contains, but as it nears he begins to fear its gravitas.

Looming above him in a dark massy cloud the thought swirls and loops down to encircle his head and engage his synapses, then, too late to ward off – memory returns with the doom-laden iron clank of a dungeon door and he remembers – his bright  newly minted day collapses and…

View all posts by David →
This entry was posted on 14 November, 2013 in homepage and tagged a day to forget, a day to remember, dave tomlin, excape from reality Tuesday, Madnes of life, nick victor, nonconform, nutter. Bookmark the permalink.