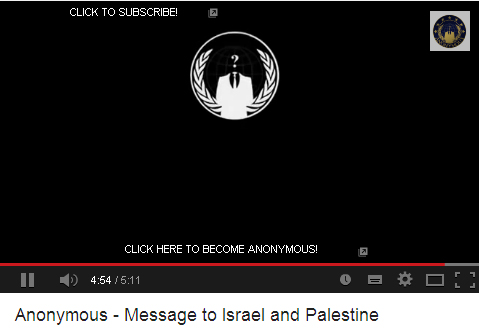 Greetings citizens from around the world, we are anonymous.

Today, we claim victory against the fascist state of Israel.

A strong faction within anonymous has taken down over one thousand Israeli sites.

Attacks are still continuing, and are growing rampant by the day, and the cyber aggression against the Zionist state are stronger than ever before. We are calling upon the entire anonymous collective, and its hidden factions, to keep attacking Israel’s cyberspace, and to always be cautious on the sites you attack, and the tools and equipment you use to leak or disrupt.

We need to show Gazans and Palestinians that they are not alone against this horrific evil.

To Israel: We will keep attacking you, and exposing your lies and crimes against humanity until you propose peace for once. Until then, anonymous and other groups will keep attacking your pathetic wall of a cyber-security. We will be forced to unleash our entire legion against your servers, thus banishing you from the internet.

Yet, we must stress, heavily, that this is not an attack on Jews, or the religion of Judaism, in fact, many Jews from around the world are siding themselves with Palestine, and not, Israel.

This is an all out attack against Zionists, and their corrupt ideology, and the systematic killing apparatus they use to suppress an under-developed location.

Greetings world we are anon-ghost.
this is an urgent call for all hackers, human rights organisations, activists all around the world, to unite again, and start campaign against Israel, share what is really going on there, expose their terrorist activity to the world. the act of launching rockets from Gaza sector to Israel is an acceptable and normal reaction against those pigs, that’s call resistance and not terrorism, israhell is never existed its only Palestine, it’s our home. if you are a hacker, activist, a human right organisation, share, hack israel website, and expose to the world their crime, show to the world how much blood in their hands, bloods of innocent children and women.
we will never remain silence against israhell war activity, anonymous collective, all hackers team will join this operation inchallah, and we will be the cyber resistance, the cyber shield, the voice for the forgoten people. the voice of Palestine. fight for the right, do something, where ever you are, what ever you can do, join the cyber intifada. on 11 july 2014, israhell, you better be prepared.
operation save Gaza…engaged.

One Response to Anonymous