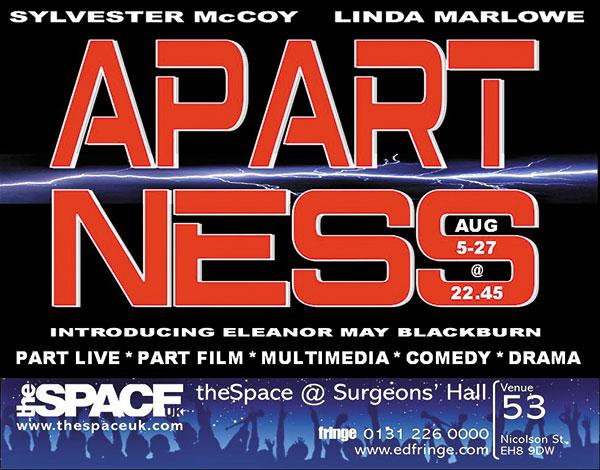 WHAT IS APARTNESS ABOUT?
‘Apartness’ is a tale of two isolated souls who inadvertently invite a devilish comedian into their lives, ultimately finding three is certainly a dangerous crowd. The surprise and dire consequences of this unfortunate relationship can only be revealed when you see the show. No spoilers, please.

WHAT IS NEW ABOUT THE CONCEPT?
The show is Part Live/Part Film, a live stand-up comedy show with a larger cast on film which, with ease, can play both theatres and cinemas, thus encouraging theatre lovers to the cinema and movie lovers to the theatre. A new way forward for both mediums in these challenging times.

WHAT INSPIRED THE CONCEPT?
Before Edinburgh Festival 2020, following the science of the virus, I wrote an Open Letter to potential participants, venues, and more, which I posted on various forums. The question it posed was: ‘Is Art more important than Life?’ A mixture of support and abuse followed, and one comedian had to be reported for harassment and online abuse, the comedian’s stance being: Art is more important, so, to hell with the old farts, we young will carry on regardless. Comments from this comedian cut deep, but the consolation was the inspiration it spurred. ‘Apartness’ is the result.

HOW HAVE YOU SURVIVED THE PAST TWO YEARS?
Like, for most, it has been a very difficult time. Not being able to put anything into motion in a physical and practical way, I have been writing more and trying to hold onto my inner sanity, preparing for a time when it would be safe to go into production again. I just hope this is the time.

HOW OPTIMISTIC ARE YOU ABOUT THE FUTURE?
Very. Though still with caution. The arts in every area have been hit hard, but independent and freelance creators have always been a formidable force, and this may be an opportunity for them to rise again, hopefully, coming up with new forms, new perspectives, and new beginnings.

HOW DID IT ALL COME TOGETHER?
I wrote it with two of my favourite people in mind; Linda Marlowe (former Eastenders’ Sylvie Carter) and Sylvester McCoy (the 7th Doctor Who) and sent it to them during Lockdown. Fortunately, they both loved it and, thankfully, committed to doing it. Then, I discovered a star of the future in Eleanor May Blackburn and have cast her in the role of the comedian. Eleanor is also to co-star in our forthcoming film ‘Bonnie & Clive’ but that’s another story! All in all, it came together fatalistically.

WHY THE EDINBURGH FESTIVAL FRINGE?
I have been taking shows to Edinburgh for many, many years, so it was the natural place to premiere ‘Apartness’. Also, the venue it is playing, theSPACEuk @ Surgeons’ Hall, is a venue two of my friends, Sylvester, and actor Jason Harvey, have previously played and both rate it highly. Like the industry as a whole, the festival needs new and old blood to participate and support its new beginnings. Not forgetting this will be the 75th Anniversary of the Festival, who wouldn’t want to be there for that?

KEVIN SHORT, one of IT’s theatre/film reviewers, has been dormant in his role as independent theatre and film producer in recent times. Here, he answers a few questions about his first project in over two years: a coming together of theatre and film in the new hybrid multimedia piece APARTNESS starring Sylvester McCoy and Linda Marlowe, which will be part of the Edinburgh Festival Fringe 75th Anniversary celebrations.

Tweet
This entry was posted on 16 April, 2022 in homepage and tagged kevin short. Bookmark the permalink.