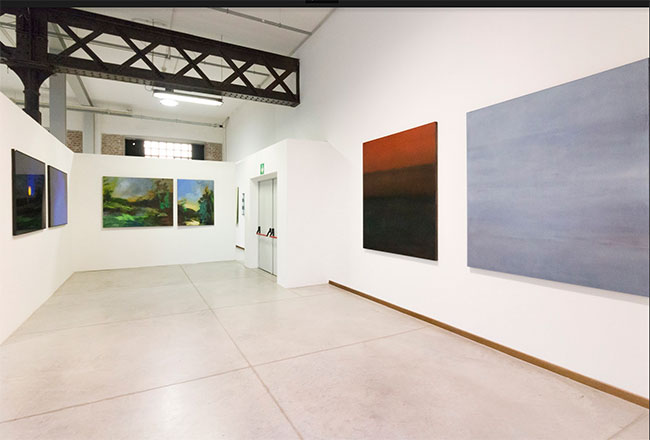 It was with some intrigue that St Leonard’s based artist Alan Rankle opened an invitation from Andrea Vento, former Director of Culture in the city of Milan, to curate an exhibition of art from Britain to launch his sensational new project space, Fabbrica del Vapore.  And it was with considerable excitement that he accepted it.

Rankle as artist curator conjures up unanticipated revelations and multi layered connections, while musing on the very definition of the work, indeed the duty, of the fine artist.  This curatorial role allows Rankle to reject any previous exhibition rulebook and use his own practice as a starting point to declare an entirely personal and, it must be said, emotional approach.  Rankle demonstrates here how much he relishes special and open-minded engagements with artists of all ages, methods and messages.  He has a wide network of artist friends and collectors and a unique ability to appreciate his peers.  And here we are privileged to view at first hand his generosity of spirit as a fine artist, and to make sometimes strange and unexpected connections, with more than a few contradictions and shocks.  This is an exhibition curated with the heart of an artist.

In order to provide the random quality associated with his painting collaborations, Rankle asked Claudia De Grandi, to co-curate the project.  They selected artists whose works would interact in the gallery to provide a subtly volatile and thought provoking collective.  AXIS: LONDON MILANO is the inaugural exhibition at Trecce di Vapore and as such provides a considered choice of some of the most crucial work currently coming out of London and the South Coast.

The works are interlinked on several levels of cultural and formal reference.  Each of the artists is clearly a virtuoso practitioner of particularly personalized genres within the spectrum of contemporary painting and photography.  This question of skill and virtuoso technique, and their crucial role in an ability to create art with a deep and credible connection to the human condition, has been of interest to Rankle for most of his career and illuminates further his curatorial approach. 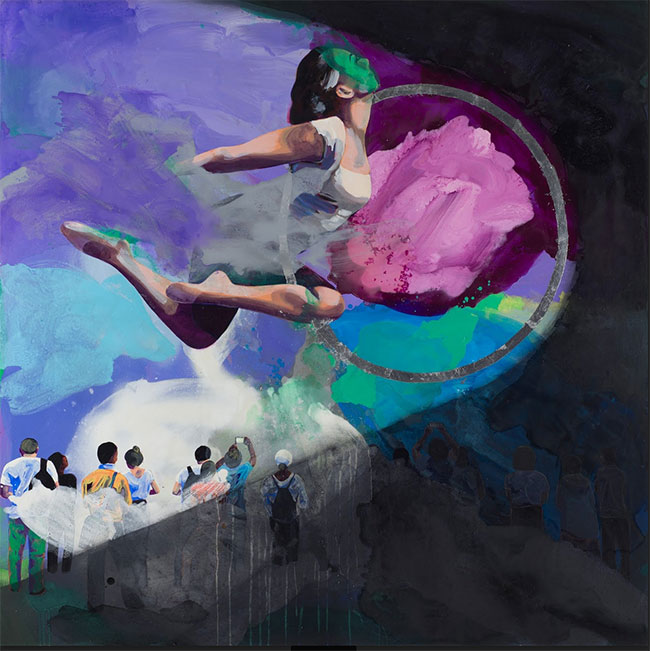 This exhibition is an environmental manifesto; one of dark discovery, that starts in the light, delves into nightmare territory, before concluding with brightness in the future – we hope.

It begins with an optimistic prelude as humankind lives in peace in the natural world. Opening the show is Matthew Radford’s exquisitely rendered ‘Rose’, a singularly untainted and ostensibly innocent work by an artist known for his razor sharp commentaries on urban life.  Walter & Zoniel’s intense searchings and revelations of the vastness of the nature they inhabit and its essence to the infinite possibilities for expansion and the sublime nature of life and the human condition.  A visionary canvas by the young artist Rebecca Youssefi provides a figurative, hope filled, focal point in the room.  Claudia De Grandi’s serene colour field canvases swoop into infinite, infinitesimal voids, while Rankle’s own contribution, a large diptych of a seemingly pastoral scene becomes on closer inspection a pointer to the panic searing across the natural environment.

Step away from the natural world, further into the dream state towards the hard margins of the urban.  Where is the sun?  What have we done?

Here are Matthew Radford’s gridded and abstracted figurative paintings as snapshots of a continuous, busy world of human activity.  Often his works are cityscapes and urban landscapes populated by apparently focused and intently hurrying figures.  In a recent energetic series of studies he has turned to illustrating the crazy condition of supermarket shelves, liberating the classic still life from stasis.

In Stephen Newton’s paintings one feels the disturbed presence of an infinitely despairing narrator in the uncomfortably desolate world of a claustrophobic stage set.  Newton has been described by the renowned New York critic and philosopher Donald Kuspit as “one of the best painters painting in the world today” who may well be right.  Should we worry?

Step further down the rabbit hole and it gets dark, really dark.

Oska Lappin’s latest work ‘Scary Amerika’, a narrative told in mixed media woodcuts and poetry, is a direct response to the mendacity in the White House.  Featuring her usual congregation of wildly drawn, off the wall characters, memories of a less horrific country are informed by naked hippy mothers and beatnik fathers, postpunk youth ‘fast-forwarded like Brigadoon into an increasingly evident dystopian future’. 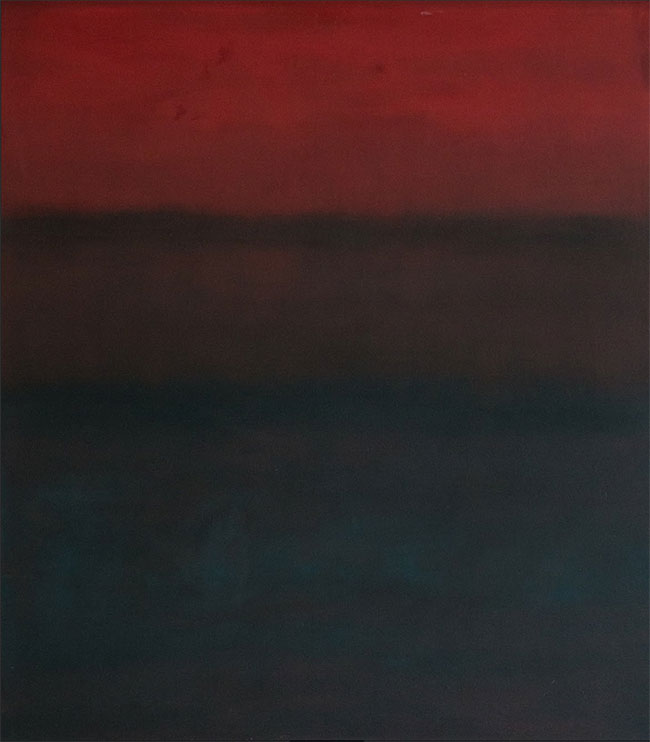 Cat Roissetter distresses, disfigures, blots, scratches, abandons her paper then scoops it up from dust filled corners. Her images likewise are removed with scalpel precision from the safety of context. The viewer makes a visitation to a long abandoned house, vainly looking for clues to the once happy world that time has erased. Everything is lost, but what horror is there to discover in the opacity?

Plenty it would seem.  In the Chapman brothers’ finely worked etching ‘The Birth of Ideas’ multifarious forms of fantastical embryonic forms, swarms of miniscule insects and entrails float unmoored through space.  This work sees the Chapmans at their most extreme and complex.

Charlotte Snook deals with different darknesses and re-imaginings.  Her works hark back to the 17th century and come up to date with her refrains chasing each other, mutating and exposing fresh human vulnerabilities.

Rankle brings a longtime collaborator Kirsten Reynolds back to Milan. While she paints with light and plays with long exposures, her epic images are dark and cavernous with alarming visceral resonance and immediacy.

Catherine Balet’s photographs lead us emerging from the dark blinking in that nether stage between sleep and wakefulness, unsure where we are, with familiar ghostly compositions and historic, but strangely modern tableaus lit with computer screens and cellphones as we revert to our selfie centred present.

Tim Craven brings us back to the beauty of the natural world with his explorations into how painting and photography relate to each other through his musings on romantic images of trees with their spatial dramas, abstract shapes and dynamic verticals.

All those unassailable subjects that formed our world view in our youth; geography, history, economics, are now being reshaped.  Uncertainties besiege the future.  Listen to the beating heart of the artist. 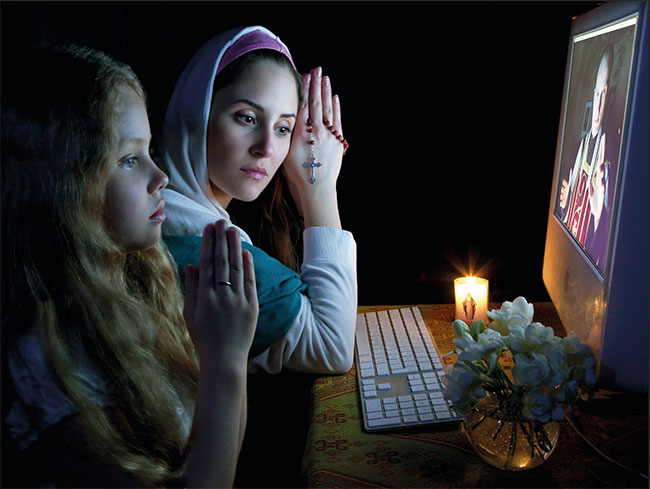 The exhibition has been extended throughout March 2018 due to popular demand.

Tweet
This entry was posted on 28 March, 2018 in homepage and tagged AXIS: LONDON MILANO, By Judy Parkinson. Bookmark the permalink.