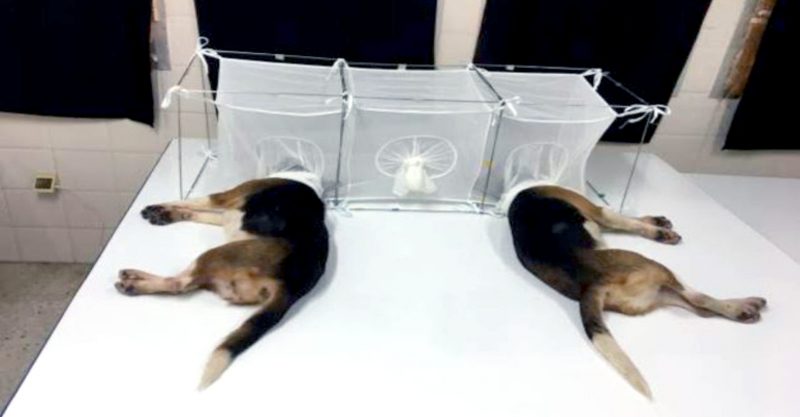 The public is just now learning that Dr. Anthony Fauci used U.S. taxpayer money to fund atrocious experiments on beagles, but as a new book by Robert F Kennedy Jr, due out Nov. 16, reveals, torturing animals for drug company profits is just the tip of the iceberg.
According to animal protection group PETA, it’s Fauci’s boss who’s the biggest problem, and the ingrained rot that’s systematic throughout NIH to the tune of MILLIONS and MILLIONS in tax funding for go-nowhere, disgustingly cruel experiments on animals. They have campaigned to replace him – Dr Francis Collins – and he has just resigned.
Robert Kennedy Jr’s trailblazing website https://childrenshealthdefense.org states:
“Spending $424,000 in taxpayer dollars as part of ‘drug testing’ experiments conducted by the National Institute of Allergy and Infectious Disease, the agency headed up by Dr. Fauci, included exposing beagle puppies to disease-causing parasites by locking the puppies’ heads in cages where they were bitten by sand flies constantly and without reprieve,” said Mary Holland, Children’s Health Defense (CHD) President and General Counsel. “Scientists conducting the experiments cut the vocal cords of many of the puppies so they would not have to listen to barking or crying from the dogs. This inhumane and heartless treatment of defenseless puppies is beyond troubling. The abuse of animals conducted at the expense of taxpayers demands a full investigation.”
“While the documents state that the ostensible purpose of this study was to ‘provide data of suitable quality and integrity to support the application to the U.S. Food and Drug Administration and other regulatory agencies,’ the FDA itself has recently stated that ‘it does not mandate that human drugs be tested on dogs.’ This is apparently not the first time the NIAID has commissioned drug tests on dogs in recent years.”
Robert Kennedy states: “Fauci hasn’t just experimented on dogs — he’s also experimented on humans, including children.” 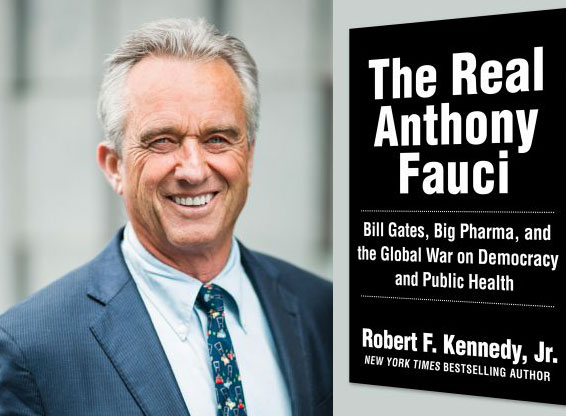 Robert Francis Kennedy Jr. is an American activist, environmental attorney, and author. Kennedy serves as president of the board of Waterkeeper Alliance, a non-profit environmental group that he helped found in 1999.

He is the third of eleven children of Senator and Attorney General Robert F. Kennedy and Ethel Kennedy.

Read the excerpt from the book, “The Real Anthony Fauci”:

In 1965, my father kicked down the door of the Willowbrook State School on Staten Island, where pharmaceutical companies were conducting cruel and often-deadly vaccine experiments on incarcerated children.

Robert Kennedy declared Willowbrook a “snake pit” and promoted legislation to close the institution and end the exploitation of children.

Fifty-five years later, national media and Democratic Party sachems have beatified a man who presided over similar atrocities, somehow elevating him to a kind of secular sainthood.

What dark flaw in Anthony Fauci’s character allowed him to oversee — and then cover up — the atrocities at Incarnation Children’s Center?

At very best, there must be some arrogance or imperiousness that enables Dr. Fauci to rationalize the suffering and deaths of children as acceptable collateral damage in what he sees as his noble search for new public health innovations.

At worst, he is a sociopath who has pushed science into the realm of sadism.

Recent disclosures support the latter interpretation. Freedom of Information documents obtained in January 2021 by the White Coat Waste project show that Dr. Fauci approved a $424,000 NIAID grant in 2020 for experiments in which dogs were bitten to death by flies.

The insects carried a disease-carrying parasite that can affect humans. The researchers strapped capsules containing infected flies to the bare skin of twenty-eight healthy beagle puppies and kept them in agonizing suffering for 196 days before euthanizing them. NIAID acknowledged it subjected other animals, including mice, Mongolian gerbils, and rhesus monkeys to similar experiments.

Dr. Fauci’s sidekick and putative boss, Francis Collins — who casts himself as a pious Catholic — kicked in a $1.1 million sweetener from NIH for this malignant project.

Of all the desperate public health needs in America, of all the pain that a well spent $2 million might alleviate, Tony Fauci and his government confederates deemed these demented and inhumane experiments the most worthwhile expenditures of America’s taxpayer dollars.

These disclosures beg many other questions: From what moral wilderness did the monsters who devised and condoned these experiments descend upon our idealistic country? How have they lately come to exercise such tyrannical power over our citizens?

What sort of nation are we if we allow them to continue? Most trenchantly, does it not make sense that the malevolent minds, the elastic ethics, the appalling judgment, the arrogance, and savagery that sanctioned the barbaric brutalization of children at the Incarceration Convent House, and the torture of animals for industry profit, could also concoct a moral justification for suppressing lifesaving remedies and prolonging a deadly epidemic?

Could these same dark alchemists justify a strategy of prioritizing their $48 billion vaccine project ahead of public health and human life?

Did similar hubris — that deadly human impulse to play God — pave the lethal path to Wuhan and fuel the reckless decision to hack the codes of Creation and fabricate diabolical new forms of life — pandemic superbugs — in a ramshackle laboratory with scientists linked to the Chinese military?

On my birthday in January 1961, three days before I watched my uncle John F. Kennedy take his oath as president of the United States, outgoing President Dwight Eisenhower, in his farewell address, warned our country about the emergence of a Military Industrial Complex that would obliterate our democracy.

In that speech, Eisenhower made an equally urgent — although less celebrated — warning against the emergence of a federal bureaucracy, which, he believed, posed an equally dire threat to America’s Constitution and her values:

“In this revolution, research has become central; it also becomes more formalized, complex, and costly. A steadily increasing share is conducted for, by, or at the direction of, the Federal government. Today, the solitary inventor, tinkering in his shop, has been overshadowed by task forces of scientists in laboratories and testing fields. In the same fashion, the free university, historically the fountainhead of free ideas and scientific discovery, has experienced a revolution in the conduct of research. Partly because of the huge costs involved, a government contract becomes virtually a substitute for intellectual curiosity. The prospect of domination of the nation’s scholars by Federal employment, project allocations, and the power of money is ever present and is gravely to be regarded. . . . [We] must . . . be alert to the danger that public policy could itself become the captive of a scientific technological elite.”

Eisenhower demanded that we guard against this insipid brand of tyranny, by entrusting our government to responsible officials ever-vigilant against the deadly gravities of technocratic power and industry money that would pull our nation away from democracy and humanity and into diabolical dystopian savagery:

“It is the task of statesmanship to mold, to balance, and to integrate these and other forces, new and old, within the principles of our democratic system — ever aiming toward the supreme goals of our free society.”

During his half-century as a government official, Dr. Fauci has utterly failed in this charge. As we shall see, he has used his control of billions of dollars to manipulate and control scientific research to promote his own, and NIAID’s, institutional self-interest and private profits for his pharma partners to the detriment of America’s values, her health and her liberties.

Of late, he has played a central role in undermining public health and subverting democracy and constitutional governance around the globe and in transitioning our civil governance toward medical totalitarianism.

Just as President Eisenhower warned, Dr. Fauci’s COVID-19 response has steadily deconstructed our democracy and elevated the powers of a tyrannical medical technocracy.

One Response to Beyond #BeagleGate: Fauci’s Long History of Atrocities