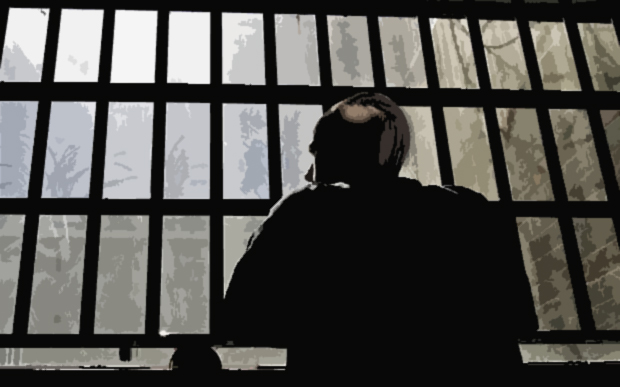 They’d put a guy in charge who had a head like a beluga whale. George was night shift Captain in the hospital block of a Jail. The howls and bangs echoing off of the pastel walls all night, every night. He sat there behind the bullet proof glass in the unit hub staring at the closed doors and sometimes neatly ticking paperwork. Always smiling. Always happy. He was the hospital ghoul, that massive head turning left and right like a water balloon, the Chief Ghoul in the freak dungeon.

Up in the hospital unit the residents cackled and spat and gouged at themselves. It was a pathetic refuge for the deviant, a feather nest for the damaged, or a torture chamber. Sometimes it was everything – absolutely any horror you could imagine – all at the same time.

Mr Elliot was a white guy in his late thirties. He had lost most of his hair through bad genetics and fights. Now, all that was left of his blonde dreadlocks were long clumps. The bald patches shone with grease. Mr Elliot had been transferred to the Jail because he’d kicked the shit out of a pregnant nurse while he was an inmate at a secure hospital. He’d told me she lost the baby. “She knew I had special blood,” he said. “She was trying to steal it.” Up here there were no pregnant nurses, just ex-military alcoholic guards. Their name badges sometimes said nurse but you’d never let them touch you, no matter what the need. Not if you really cared about yourself.

Mr Elliot spent his days trying witchcraft to cure his blood. Walls were covered in symbols and his own shit. He tried to catch birds through the bars of his cell too, but in two hard years he’d only ever caught a pigeon. He still wore a couple of feathers knotted into his dreadlocks with bits of string.

Nick, down the row, used to strangle himself with his clothing. Now he lay in a pool of sweat on a crappy plastic mattress, naked. The door of his cell was Perspex and a bored guard would sit opposite it all day and night reading a tabloid newspaper. Nick went to a room to see his psychiatrist one day and managed to smash a coffee cup on the floor. Before anyone could react he’d picked up a shard and dug it deep into his arm. Even the guards were impressed with that level of determination.

The shouts, groans, whimpers, screams and banging. Charges head first into steel doors. Dull thuds and silence. This was the end of the line. If you were here you could only ever move upwards. There is nothing comparable in the good ole Western World. George, with his huge head, heard all of it, he didn’t think about anything too deeply. Just gave the orders. Never moved. Never stopped smiling. Had his own problems.

Tweet
This entry was posted on 30 May, 2020 in homepage and tagged Ben Thomsett. Bookmark the permalink.