Binsey, the Green Woman and the Wood of Dreams

 
In the poetry and the history of particular places
Spirits seethe, above and below ground –
A free-floating compost of ancient resonance;
Rich ingredients of other states of mind.

Binsey lies on the edge of Port Meadow, that wild expanse
Given to Oxford by Alfred the Great –
Never ploughed or treated with chemicals in a thousand years
So that it remains almost in its original state.

On the way to Binsey there are the ghosts of trees –
Poplars cut down in 1879 –
Each a hundred-foot-high with six foot wide trunks.
“Strokes of havoc unselve the sweet especial scene”

Was how Gerard Manley Hopkins described man’s meddling
And his destruction of these beauties of nature.
“To mend her we end her,” was the poet’s comment
On what he saw as the Binsey trees’ torture.

“All felled, felled, are all felled.
“O if we but knew what we do.”
“Aftercomers cannot guess the beauty been…”
Yet that beauty is still ringing true.
 

.
The avenue of Hopkins’ spectral poplars
Leads from a tiny hamlet to a church,
Where groups of miniature goats greet the visitor –
Their eerie eyes staring on the way to the porch,

 
Open a trustingly unlocked door and centuries peel back:
The Dark Ages are entered into in a trice.
The church is unlit; there’s just a precious silence
From stone walls quietly digesting prayers.

Binsey church is lit by candles for its services
And has been since Nicholas Breakspear was rector.
Eight hundred years ago he became Pope Adrian
The first Englishman to hold St Peter’s sceptre.
.

Henry II asked Adrian if he, Henry, could invade Ireland
Saying he’d put money in the Vatican’s coffers;
By demanding St Peter’s Pence from every Irish household
And this was ratified in a Papal Bull, ‘Laudabiliter’. [1]
.

Under the pretext of stamping out savage practices
Ireland would become England’s first colony
Being granted by the Pope to Henry “in perpetuity”…
Thus Sinn Fein can be traced back to Binsey.

A wooded island with an independent feel,
Binsey is now a haven of tranquility
With a sacred well at the west end of the church,
Reputed to cure blindness and infertility.

The well owes its origins to the legend of Frideswide
Being chased by an unwelcome suitor through Binsey Wood:
Failing to fend him off she seeks divine intervention.
God obliges and strikes Algar, her sex-pest, blind.

However, once this happens the saintly Frideswide
Is overcome with remorse and feelings of guilt
Whereupon there springs up a magical well, a ‘treacle’ well –
Treacle being old English for a ‘healing fluid’.

The suitor regains his sight with a few drops from the well
Whereupon, in 730, Frideswide founds a community
Of those devoting themselves to the healing arts,
And the centre of their activity is Binsey.

In the 14th-century collection of vernacular saints’ lives,
Known as the South English Legendary,
Frideswide, the green woman of Binsey, is credited
With a miracle-worker’s ability:

“As heo yede a day in the toune, a mysel heo mette.
To hure the mysel felle adoune, and on knes hure grette,
And bysoght that lady that heo hym cusse scholde.
Heo custe hym, and he was hole, ryght as God hit wolde.

“As she walked one day in the town, a leper she did meet;
“At her feet the leper fell, and humbly did her greet.
“He prayed to the lady, that her kiss might him heal;
“She kissed him, and he was cured, just as God willed.”

The road to Binsey in the Middle Ages was worn away by pilgrims
Who hung crutches in the church to testify to their cures
Henry VIII brought Katherine of Aragon there, determined
Her infertility would be ended by well water and his hasty prayers.

But the treacle well’s spirit was unable to oblige the tyrant
(Whom history claims killed 72,000 of his own nation);
The sacred well couldn’t provide Queen Katherine with a son
And the fact of it led to the English Reformation – 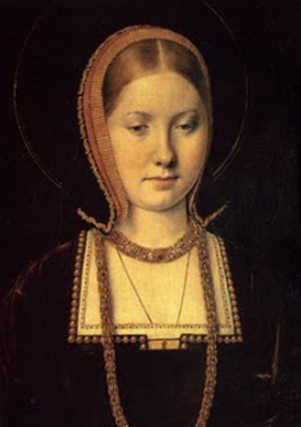 In which Henry declared himself a Protestant Pope
Destroying a health service that tended to the poor:
He trashed the monasteries, he turned nuns into prostitutes –
Selling their libraries and treasures to pay for a war.

Nonetheless despite Henry’s depredations
Binsey survived as an oasis
And though it refused to work its magic on royalty
It was to enchant Lewis Carroll and Alice.

The Binsey vicar in Lewis Carroll’s day was called Prout
And Prout was the model for Carroll’s sleepy dormouse.
Prout would fall asleep in his own sermons so he’s made to take part
In a mad Tea Party in the March Hare’s house.

On a quiet reach of the Thames just beyond Fiddler’s Island,
As Carroll rowed Alice from Folly Bridge to Godstow,
Carroll’s friend Duckworth tied the boat up at Binsey
So everyone could concentrate on Carroll in full flow.

White Rabbits and Mad Hatters were conjured up from nowhere
And Alice and her sister giggled as they recognized
Portraits of Oxford characters whom they both knew,
Notably their Governess, Miss Prickett, whom Carroll satirized.

There’s no doubt the Red Queen derives from Mary Prickett
For elsewhere Carroll describes the Queen as “a Fury
“The concentrated essence of all governesses. Cold and calm.
“Formal and strict. Pedantic to the tenth degree.”

Mary Prickett, whom Alice Liddell would nickname ‘Pricks’,
Becomes the Red Queen shouting, ‘Off with their heads!’
And with Binsey churchyard being full of people called Prickett
It gives Carroll some of Wonderland’s hidden leads.

Carroll layers his stories with puns and complex wordplay:
The Rose in the Garden of Wild Flowers calls the Red Queen
“One of the thorny kind”, and Carroll would also have known
That Thornbury is Binsey’s Holy Well’s former name.

On the 4th July 1862 there was to take place on the river
The first reading of the Mad Hatter’s Tea Party.
In which a dormouse, who sleeps throughout the proceedings,
Is pestered by those present to “Tell us a story!”

The story he tells the Mad Hatter and co. is of three sisters
Whose names are those of Alice’s sisters disguised.
The dormouse describes Elsie, Lacie and Tillie who live
At the bottom of a treacle well much to Alice’s surprise.

Elsie is L.C. for Lorina Charlotte and Lacie…
Lacie is Alice in anagram form.
Tillie is short for Matilda, the pet name given to Edith.
Thus his audience are stars in his surreal brainstorm.

Although Alice, listening to the dormouse’s story,
Won’t believe such things as treacle wells exist –
Wells filled with sweet and sticky confections must be uninhabitable,
Nonetheless the dormouse persists.

The whole Tea Party becomes violently illogical
And the Hatter is alarmingly rude.
Alice leaves saying ‘I’ll never go there again’
“As she picks her way through the wood.” 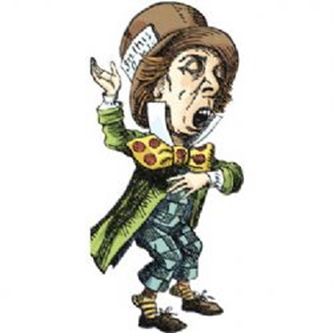 The wood has a tiny door in a tree to take her to the next chapter
(Provided she nibbles at a mushroom to change her dimensions).
Binsey may have no doors in its trees in its ancient woodland
Yet Binsey Wood can alter the doors of perception.

It’s wild and “We need the tonic of wildness”
Wrote Henry David Thoreau
Who knew that humanity’s been hard-wired
So that nature can kick-start man’s mojo;
. 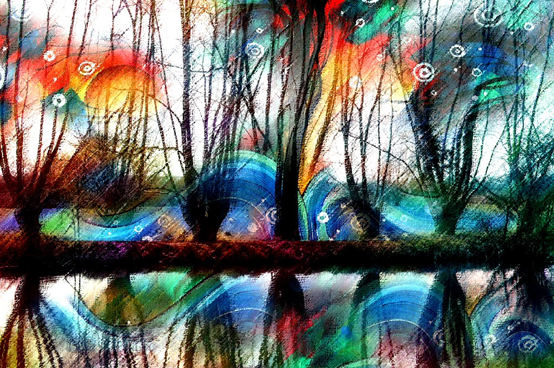 And Wordsworth agreed, saying, “One impulse
“From a vernal wood can teach
“Us more of man ­– of moral evil and of good
“Than all the sages can.”

In Japan it’s known that shinrin-yoku,
Or “forest bathing”, reduces cortisol:
Stress hormones and blood pressure drop
If you’re with trees instead of concrete walls. 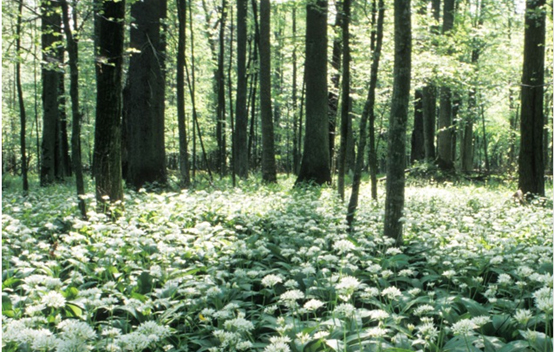 Binsey Wood’s air swirls with phytochemicals –
The airborne defense mechanisms of plants –
Which exist to ward off pathogens and predators.
Thus each inhalation is equipped to protect. 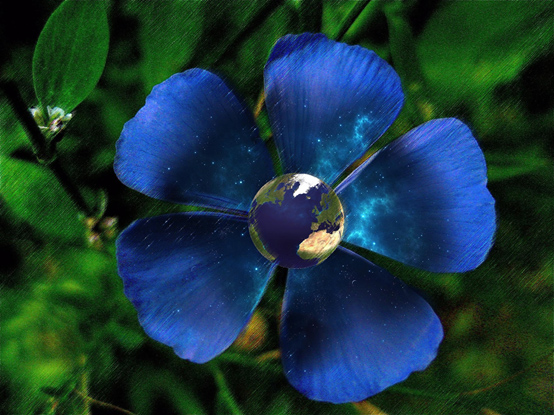 “We Are Nature”,  Elena Caldera

There is also a Japanese concept known as “yūgen”
Which describes a soaring feeling for the sublime
In which there’s an awareness of the subtlety of the universe.
Which occurs when your breath is pure and calm.
  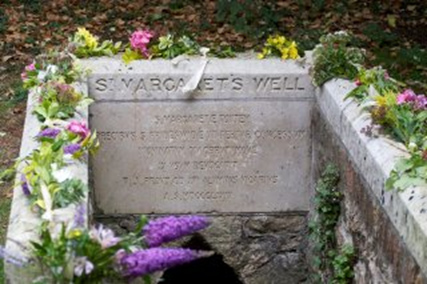 Somewhere that’s been a holy place since A.D.730
Is very likely to have a calming effect
And its healing ‘treacle’, described as an “antidote to venom”,
Still draws those who feel their lives have been wrecked. 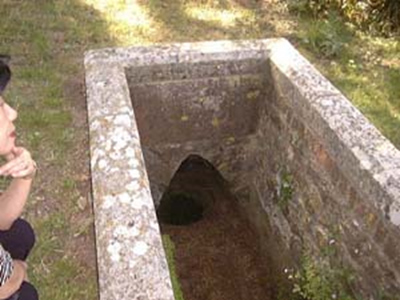 Leaving Binsey in June along the lane from the church
Its meadows are ablaze with the mauve of clover
And huge oxeye daisies and the russet tips of young sorrel –
Ragged Robins rock as if summer’ll never be over.
. On Binsey Green stands the Perch and its willow bowers
And its old English skittle ground.
Dylan Thomas once drank here and he, together with Hopkins,
Wrote poems through which nature can rebound. 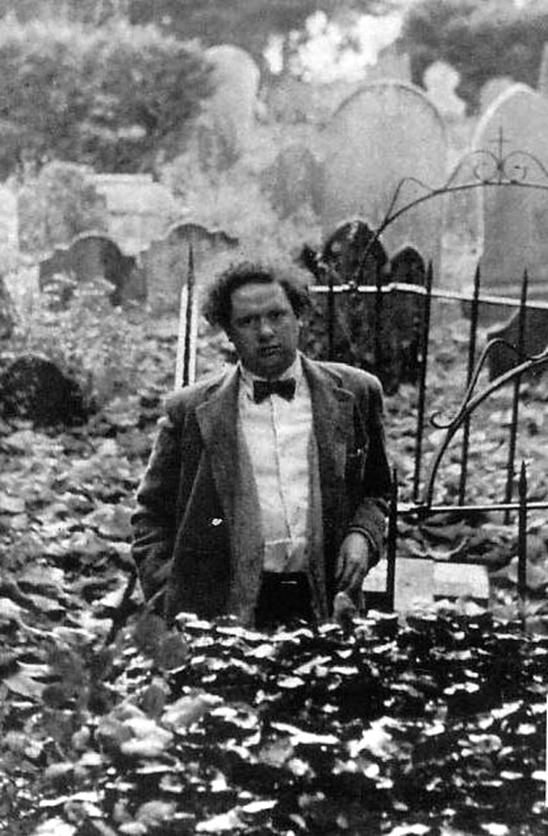 “The force that through the green fuse drives the flower
“Drives my green age”, wrote Thomas, and it would chime
With Hopkins’ declaring that “nature is never spent”;
That “There lives the dearest freshness deep down [in] things.” 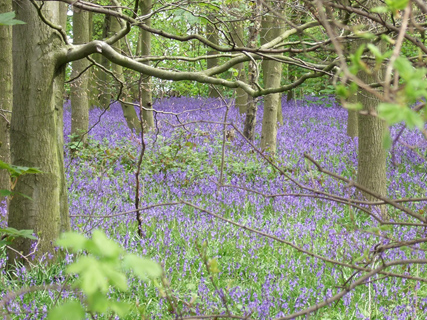 Sometimes there are glow-worms in Binsey Woods
Turning its woodland floor into a night sky –
Into a place where the world’s turned upside down
But where a sweet elation and a joy often lie.

One Binsey clergyman, Arnold Mallinson,
Filled the church roof with stuffed owls.
He did it in order to discourage Binsey’s bats –
Better a world run on smiles not scowls.

Beyond Binsey’s secluded island lies the outside world
With its noise and pollution; its conflict and its hell,
But havens can tell you, along with Julian of Norwich,
“All shall be well. All manner of things shall be well.”

2 Responses to Binsey, the Green Woman and the Wood of Dreams