Excarnation of the Amerikan Scheherazade 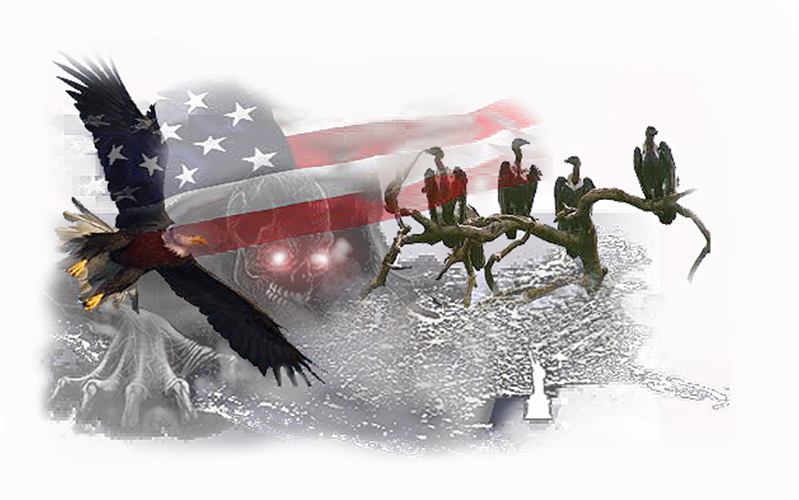 The marionette theater is upon us again;
Has it really been so many years?
Across the darkling stage they spill, delusional
Corpses of consumer politics,
Tumbling fiendishly as the black vultures circle.
Entitled, strident, preening, the talking dead,
Glutted with depraved pointless money and fears;
Ghostly flashbacks from some totalitarian hallucination
,,,Here atop the bloody red white and blue tower of silence they lie.

There’s Ronald McTrump, spoiled brat of the apocalypse,
Complete with obscene arrogant smirk, contorted
Impotently flailing at the legions conjured by his racist fantasies
Wearing his “Make America Great Again” cap (made in China, of course)
Insanely implying that Amerika is weak and small
With its fascist military of terrestrial girth
Second only to its suicidal pollution and megalomania,
Apparently not so “great” as it once was
In the glory days of its birth in genocide and slavery,
Its problem-childhood of exploitation and imperial war.
“Good people don’t go into government” he snivels, in a moment of truth,
…And the black vultures pluck out the eyes.

Then up pops Hilarious Clinton, harpy of doom, haggard
After so proudly enduring her rape by a whole senatorial committee
Muttering “I was really asking for it” and “I meant yes when I said no,”
As she vomits frack-water all over another country;
See her cackle now in turn, grinning madly as the television Gestapo
Bursts in upon another private life with total impunity
Turning another human reality into a sensationalistic mockery
With their oil-slick suits and ties and carefully prepared “opinions”
And their coterie of aryan super-vixens cheering for war and the police
As they call you “sir” with a boot on your neck,
…And the black vultures peck at the brains.

Now in waltzes Sped Cruz, with cartoonish blood-lust
And the taste of Christian butchers fresh in his rotten mouth;
“As an anti-abortion death penalty supporter,” he shrieks,
I’ll gladly go to court to defend drug companies’ right to gouge the poor”;
Drooling he strokes the back of a dispersant-choked laughing gull, flapping its little wings
Weakly, like a mutilated Afghan teen lifting his hand to shield the sunlight
Which was in fact the flash of another million-dollar missile,
Deliriously screaming “Praise Jesus” as it vaporized a hospital
As duly authorized by Amerikan Eichmanns in air-conditioned offices.
,,,And the black vultures tear off the flesh.

And there’s still one last cadaveric puppet, on slightly less strings,
Who’ll soon sing the song the CEOs and Pentagon sing:
It’s the doddering naïf, “F-35” Sanders,
Clutching his fairy tales about democracy like a pearl necklace
Still so firmly believing the thousand and one lies
Told to him by the cultic religion called Amerika
About some fairer and more equitable distribution of the spoils
From the endless global industrial pillage,
And solipsistically repeating them, desperate
To join the glossolalic chorus

…As the black vultures rip away the heart
Of this plural Scheherazade but skeletal now,
Yet somehow still lulling the Shahryar
Of your psychotic settler violence
To sleep again through the long cold night.

Tweet
This entry was posted on 11 February, 2016 in homepage and tagged Jordan Levinson. Bookmark the permalink.