BLUES FOR THE HITCHHIKING DEAD 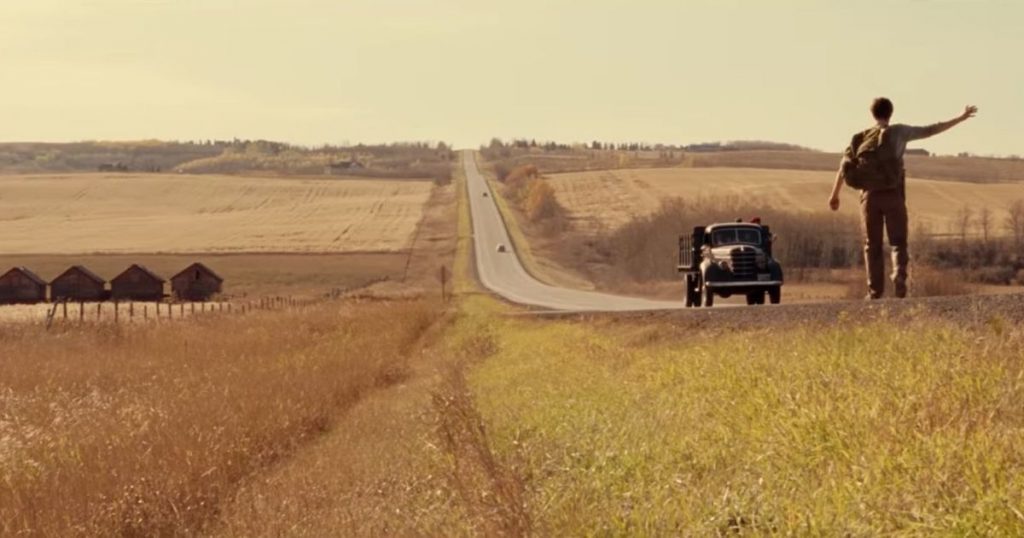 Get out ‘On The Road’.
Stick your thumb in the air.
Wait for that next lift to take you

I just came across a couple of my old hitchhiking poems, which set me spinning off into a number of strange memory-places.

There are three phases to the hitchhiking experience.

I can’t remember when I first did it, although there’s always been that wind-blown vagabond romance about the idea, the hung up on the street-corner with your thumb in the air watching the cars go by. Certainly when I stumble across Jack Kerouac hitching across America coast-to-coast it was a thermonuclear moment, everyone seemed to have a battered copy of ‘On The Road’ (1957) stuffed into their back pocket. That bop-prose still radiates the luring mythology of adventure. But even before that I guess I picked up the bug from the wandering Folk-poetry of the restless early Bob Dylan songs, and the Beatnik affectations of that troubadour scene. At his greatest, Jackson Browne catches the existential fire of standing on the corner, ‘we may lose or we may win, but we’ll never be here again’ on the breathless knife-edge of now.

I know I hitchhiked down to London with a friend called Peter England while I was at college in Hull, trekking down the M1 motorway from one lift to the next. Finally arriving at the North Circular Road and imagining we were there, without fully realising how far the London urban-sprawl extends. Hopping a tube for the last miles. We had this idea of walking the streets through the night, high on the buzz of the city, recharging at some all-night café. We gravitate inexorably to Soho which was then at its craziest as a low-rent bohemia of sightly disreputable clubs and softcore bookshops spilling out into the street. We call off to pay homage at the Marquee Mod R&B club, Ronnie Scotts Jazzclub and the Colony Room writer’s watering-hole which are a legendary part of the Beat-life, but as night begins to fall hard we reconfigure plans and register at the YMCA instead.

We do that a number of times subsequently, and I do it with other people too. The itch for movement just hits. At that time there’s a cash-strapped highway-gipsy population of itinerant students, musicians, layabouts in general, and at every M-way sliproad there’s a group thumb-tripping who form a brief community, evolving the etiquette of standing in an ordered line so the first there gets the first lift. Naturally, if there’s a hitching girl in short shorts and long windblown hair she tends to get priority attention from potential pick-ups. I remember one girl hitching with a large dog, just for insurance against predators. She still got lifts. As we wait we get attuned to each mood of the exhaust-fumed air, the dandelions and garbage along the verge, the breeze coming in over the brow, the movement of clouds that might threaten drizzle to dampen your enthusiasm. We are temporary allies in adversity, trading stories. Where it’s good to get lifts. Where you wait an eternity and the lift never comes. About weird drivers and manic rides. About mythic women who travel forever up and down the motorway eating at transport cafés in exchange for sex with truckdrivers. Such encounters become fleeting friends who get whisked away when that truck or estate car slows to a halt and they do that backpack lurching hobble to the open-door before it has chance to change its mind and pull away again. Sometimes the between-lift limbo fritters away into hours, at other times the next free ride is immediate. But once you start tripping, you don’t want to stop. You want to keep going. It’s a big planet. It’s not big enough.

When I start doing readings of my own I hitchhike down to Birmingham to read in a Pub music-lounge, then stay over, sleeping on a mattress on the host’s floor. I go on to meet up with a writer studying at Selly Oak University who I only know from letters and magazines, and we get mildly reeling together at a pub called ‘The Better Ole’ which he explains to me is a reference to First World War trenches. Back on the side of the motorway home I pass the Heinz factory where the aroma of tomato sauce hangs like rich fall-out in the air. Some lifts are from bored business travellers who just want conversation to pass journey time. Sometimes it’s big trucks on long-distance hauls. It makes sense not to contradict their bigoted right-wing rants, unless you want to be promptly dumped on the verge. Although that happens. Once or twice there’s a weird situation where some creepy guy puts his hand on your leg while gear-shifting. Then along the circular outside Sheffield we get picked up by a white abattoir van which smells of dead meat, by a huge man with a shaved head and single gold earring. Mostly you just want to stitch this connection to the next one, along the route to wherever it is you’re aiming for. Each random ride is a stage closer.

Which was the last time I hitched? I remember the poet Pete Faulkner came down to stay over. We try to hire a vehicle but it costs too much, so we just hitch our way across Yorkshire to the coast to stay over with writer Dave Wright in Bridlington, then up to Filey where George Cairncross published ‘Bogg’ magazine. It’s hot summer. We wear sandals. George has a small gent’s outfitters shop which also sells tourist novelties to weekend trippers. To what would be the consternation of his conservative clientele he lives in the flat above which is crammed with his vivid collages and artwork, poems and books, manuscripts and the scent of the big duplicator in the corner which churns out pages of subversive text. He has a large barrel of ale he’s been saving, he says he’ll only open it if we drink it all between us. Things gets crazier.

Then there comes a time when I’m driving my own car, the situation switches around into the second phase. As I pass hitchhikers strung out along the sliproad it’s my turn to pay my dues, conscience-pricked to offer rides as a kind of Kharma payback. Now I’m the host. I seldom pick up more than one at a time. Don’t like the idea of a stranger sitting behind me while I drive, although I’ve done that myself plenty. I pick up a girl who’s hitching from Nottingham Uni home to Hull. When Jimi Hendrix starts playing on the radio I pull sharply into a lay-by to listen, for the duration of the track. It’s only later that I realise how disturbing that rapid detour must have been for her.

The third phase – now, is that no-one seems to thumb-trip. The sliproads are unpopulated. The haulage companies impose bans on their driver’s picking up passengers, in case of litigation. Some drivers do it anyway. But not many. Perhaps the stranger-danger urban slasher myth has contributed. Or maybe we just prefer public transport, despite whinging about cost and unreliability?

But I wrote some OK hitchhiking poems, and I’ve still got those Kerouac paperbacks.

View all posts by Andrew →
This entry was posted on 23 May, 2020 in homepage and tagged Andrew Darlington. Bookmark the permalink.